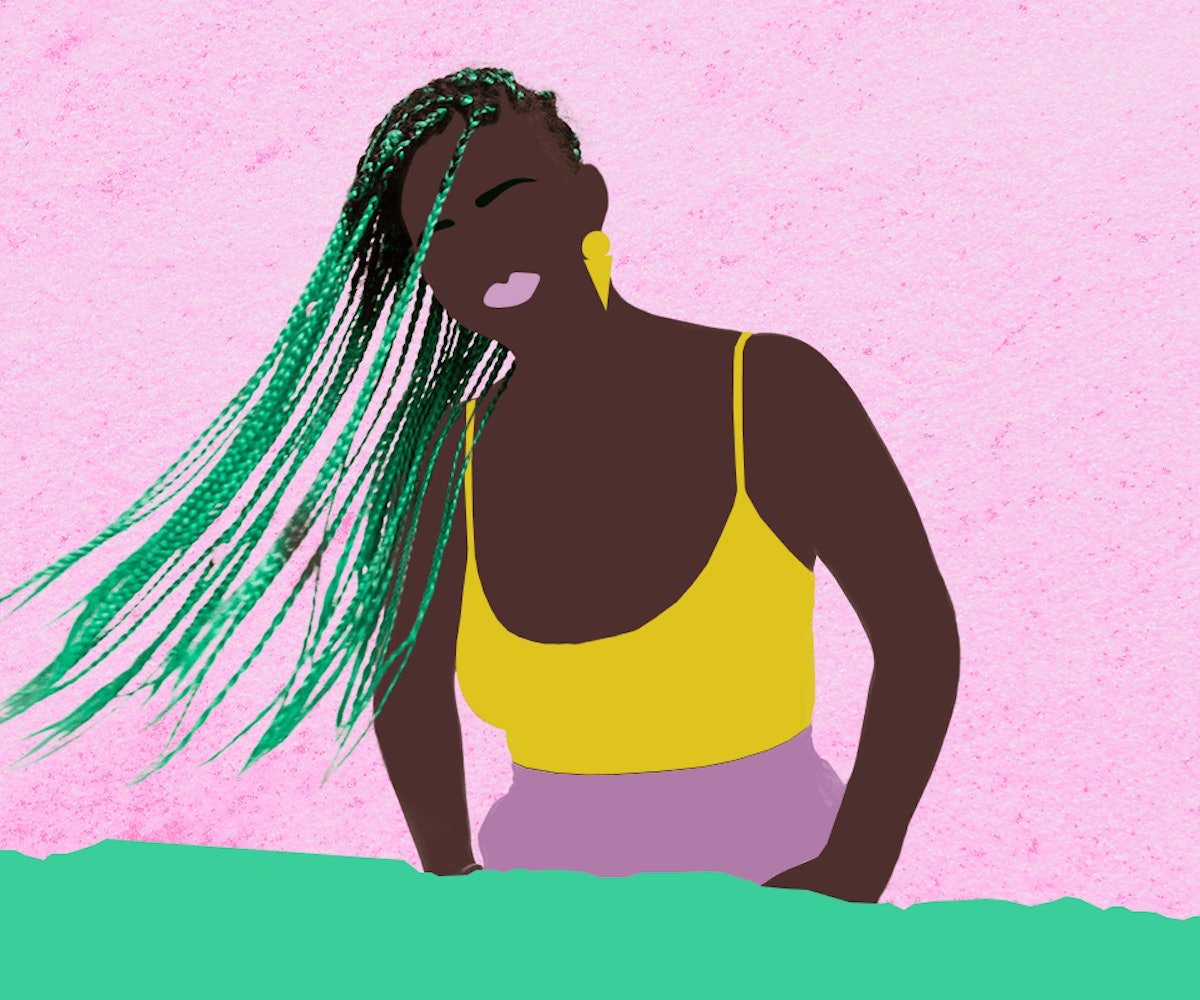 "So micro-braids are making a comeback?" my friend asked while holding the door open for me to the coffee shop. I pulled my small, waist-length knotless box braids around to the right side of my neck and immediately had flashbacks to high school, painstakingly taking out tiny braids for hours.

Back in the early 2000s, micro-braids were cute. They still are. The process of getting those tiny braids was not for the faint of heart, though — eight or more hours in a chair, hair being pulled tightly in different directions by two or more braiders at the same time. The end result could be styled almost just like hair for several weeks after, and that's what was important then. But, braids have never been only an aesthetic for Black people. They're a beautiful necessity that serves a purpose.

As more Black women are opting to care for their natural hair without chemical straighteners, protecting these coils is what's important. Knotless box braids cause little to no tension, unlike traditional box braids, micro-braids, or cornrows, according to licensed natural hair instructor and cosmetologist Stasha Harris of Magic Fingers Studio. Harris, who's been braiding hair for more than 15 years in New York, says knotless box braids aren't new, but the products and techniques have now been perfected.

Traditional box braids use a knot at the base of the braid to keep it tight and in place. Knotless box braids ditch the knot and instead are created by braiding the natural hair and feeding in pieces of braiding hair. This means less tension on the scalp and easier access for washing and moisturizing the hair for the six or so weeks the style lasts. Besides the health benefits for natural Black hair, braids are a major part of Black culture.

"I wore mostly braids as a child," Harris tells NYLON. "It was part of our Sunday routine where mom would sit us down and do our braids on a Sunday evening."

Braiding is a cultural practice passed down in Black families — an ancestral tradition. Tribes of people throughout Africa wore braided styles that told the story of who they were and where they came from. According to H. Shellae Versey, Ph.D., assistant professor of psychology and African American studies at Wesleyan University, braids were once a survival tool, used to store rice in children's hair during the slave trade voyage known as the Middle Passage and later served as maps to freedom. They're historically ingrained in the lives and identities of Black women. Because braids are so much a part of Black culture, they are also inherently political.

In the early 18th century, enslaved Black women wore rags over their hair to protect it from the extremes of hard labor. In the late 18th century, free Black women in Louisiana were required by law to cover their hair with scarves. After the formal abolishment of slavery in the United States in 1864, hair straightening became popular among Black women. Black women needed to assimilate — to be accepted into a society where straight and sleek was deemed beautiful and professional. After the Civil Rights Act of 1964 made racial discrimination illegal, the Black Power movement saw a return to natural textures as a political statement and a reminder that Blackness is present and beautiful.

In the 1980s, a hotel fired a Black cashier who refused to take out her braids, which were deemed "extreme and unusual" by interpretation of the hotel's policy. Black high school students were denied prom and kicked off their sports teams for their braids, considered "unnatural" by their school administration. A retail employee, a news anchor, and many more Black women have stories to tell about being fired for wearing their braids. Their cases attempted to make the connection that braids are a part of Blackness, and at the root of discriminating against Black hairstyles is anti-Blackness, and they were right.

"Because of its long history and significance to people of African descent, particularly self-identified Black women, braided hair is considered a hairstyle unmistakably associated with Blackness, much like the afro," says Versey. "Braids can be an explicit marker of identity, and in this case, Black women's identity."

Racial employment discrimination was made illegal in 1964, but braids, a style that takes so much time and skill and that's rooted in so much culture, are still considered unkempt and unprofessional. Just within the past year did two states, California and New York, start recognizing and banning discrimination based on natural hair.

"Braids are not just a style. They're a form of art," Harris said. They are Black culture. They are not a trend that will come and go. They are, as Versey noted, "a cultural practice deeply rooted in ancestral tradition, mothering, and self-love."

Knotless box braids are in now, but they are the natural evolution of protective styling for coily, kinky hair. While they protect our hair from manipulation, the elements, and chemicals, they also put us at risk. The very image of Black women with ropes of braids adorning her head in the workplace is controversial. When we wear box braids, we wear a symbol of resistance. We wear a middle finger to Euro-centric beauty standards.