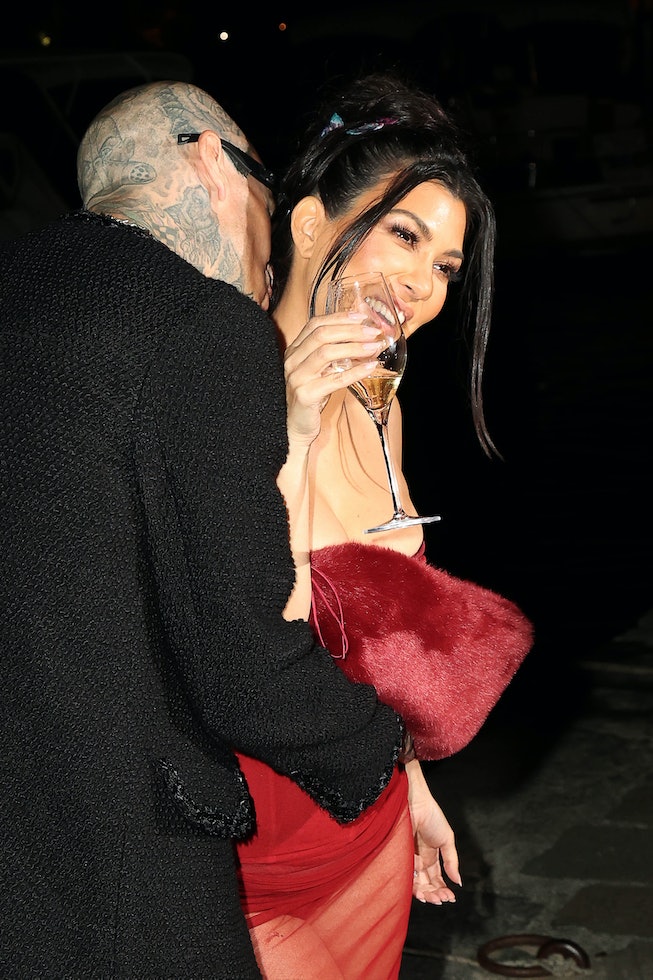 Wedding season has only just begun and sorry to everyone else planning on tying the knot in 2022, butt we’ve already witnessed the most anticipated wedding of the year. Kourtney Kardashian and Travis Barker’s Italian destination wedding (not to be confused with their Vegas “practice” wedding or their California courthouse wedding) took place on Sunday, May 22. The affair was gothic-themed and also just so happened to take place on World Goth Day, in keeping with the punk couple’s signature aesthetic. It also was a family affair, with the entire Kardashian clan posting behind-the-scenes videos and pictures on their Instagram stories. Naturally, the whole crew had a traveling glam squad nearby for all of their gothic-themed looks during the multi-day event.

Kourtney's wedding day makeup was by celebrity makeup artist Leah Darcy, who has mastered Kourtney’s natural glam look. Leah was also the artist behind Kourtney’s Met Gala makeup and is a go-to for celebrities like Hailey Bieber and Stella Maxwell. Kourtney’s bridal up-do was created by Los Angeles-based hairstylist Irinel de León (who also did her hair for the Met Gala) and Travis was taken care of by celebrity men’s groomer Andrea Pezzillo.

The rest of the sisters also had their own glam team (as always), with Mary Phillips creating Kendall’s blushing day-time makeup and Kylie Jenner’s makeup artist Ariel joining the festivities and nailing her pre-wedding smokey eye. Jesus Guerrero, Kylie’s regular hairstylist, was also behind both Kylie and Kendall’s chic and flowy up-dos for the special weekend.

With a team of favorites (some old and some new), it looks like the Met Gala this year was just a warm-up to the goth glam wedding. It’s also a good reminder that it takes a whole team to look like the Kardashians. Of course, the newly married couple was entirely deserving of all the glitz and drama for their big day. After all, a family that glams together, stays together.

NEXT UP
Beauty
The Best Beauty Looks From The 2023 Grammy Awards
Beauty
This Hailey Bieber-Approved Blush Now Comes In 4 New Shades
Beauty
“Birthday Makeup” Is Sparking A Battle of The Sexes On TikTok
Beauty
Isamaya Beauty’s New Lipstick Was Designed To “Celebrate The Male Form”
Style + Culture, delivered straight to your inbox.