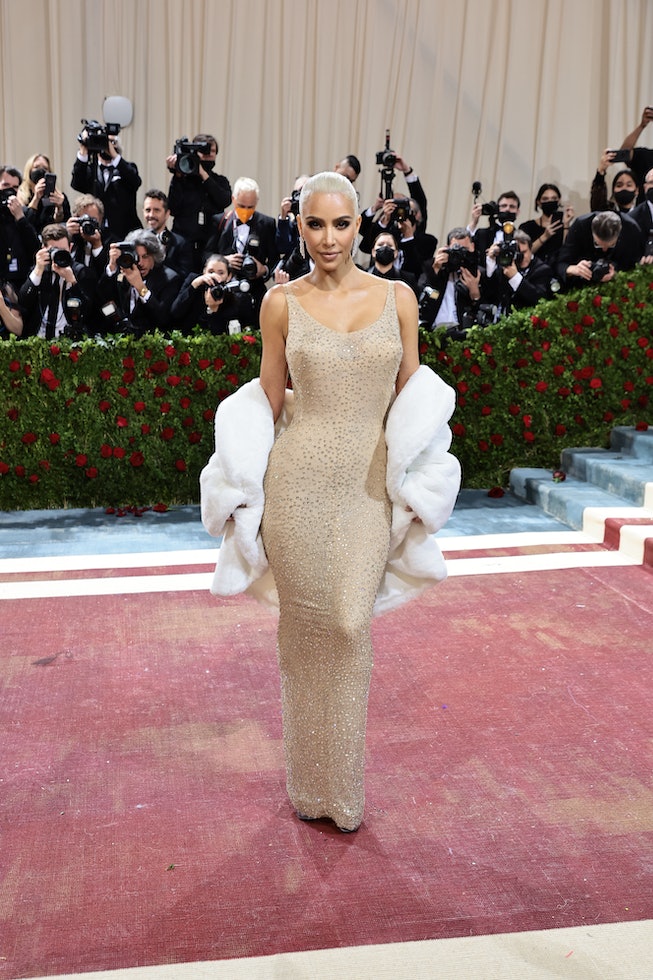 Film footage of the infamous moment shows Monroe slipping off a white fur coat to reveal the sparkling, form-fitting dress beneath. “Nowadays everyone wears sheer dresses, but back then that was not the case,” Kardashian told Vogue. “In a sense, it’s the original naked dress. That’s why it was so shocking.”

The dress, which was embellished with over six thousand crystals, was based on a sketch by Bob Mackie for French-born Hollywood costume designer Jean-Louis. To complete the look, Kardashian bleached her hair blonde and tied it up into a tight, neat bun.

“The idea really came to me after the gala in September last year. I thought to myself, what would I have done for the American theme if it had not been the Balenciaga look? What’s the most American thing you can think of? And that’s Marilyn Monroe,” Kardashian told Vogue. The instant she stepped foot on the red carpet wearing the infamous glittering dress, her hair platinum blonde and perfectly coiffed, the reference was unmistakable. “For me the most Marilyn Monroe moment is when she sang “Happy Birthday,” to JFK, it was that look.”

NEXT UP
Culture
An Exhaustive Breakdown Of The Balenciaga Controversy
Culture
Megan Fox’s Dreamy Vintage Gaultier Dress & More Party Photos You Missed
Culture
Mowalola Teams Up With Bratz For A Daring, High Fashion Collection
Fashion
Reformation & Canada Goose Team Up To Warm You Up