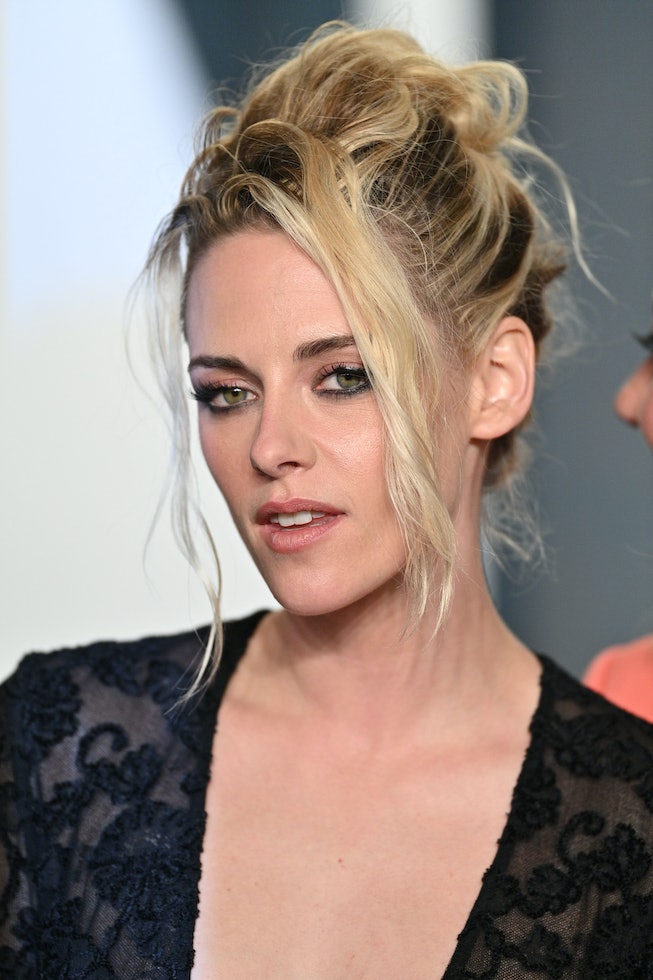 From New York to Paris, this fashion month has been all about goth and grunge for beauty. From Fe Noel’s teary smudged black eyeliner and thick wings at Dior, to spiky mohawks at Thom Browne and the low key just-out-of-bed hair at Fendi, the vibe is undone, imperfect and rebellious. In keeping with the trend, cool girl queen Kristen Stewart just took the grunge crown at the Chanel Spring Summer 2023 show on October 4th in Paris. She attended the fashion show sporting a fresh new pixie mullet that looked reminiscent of her The Runaways-era mullet and also evoked modern grunge.

For the end of Paris Fashion Week, Kristen sat front row at the Chanel spring runway show, (obviously) decked out Chanel fashion. She wore a completely black and white outfit, including a pin-striped graphic Chanel sweater, a tweed mini skirt, sheer tights, and combat boots. But most notably, her hair is now dyed dark brunette in shorter and spikier new ’do. Kristen was last spotted this summer with mid-length blonde hair and wispy face-framing pieces, making the change to a pixie mullet with micro bangs a dramatic one.

Her longtime hairstylist, Adir Abergel, was behind the dramatic chop and color change from the grown out Princess Diana blonde to the new espresso brown hair color. On Instagram, Abergel celebrated the new hairstyle by sharing videos of the show’s invite and opening video, both of which feature Kristen and her chic new mullet.

Kristen Stewart has been an ambassador for Chanel since 2013, when she starred in the advertising campaign for the Métiers d'Art Paris-Dallas collection. She’s been with the fashion house through several eras of her beauty evolution. However, her new pixie mullet haircut is a return to form for Kristen, reminding us of her work in the iconic 2010 musical drama The Runaways and the time she spent with the hairstyle while filming. Although her in-film mullet was longer, inky black and more dramatic (a là her her character in the film, Joan Jett), this new dark and choppy cut is every bit as rock and roll. With these punk cuts continuing to trend into the new season, we’re excited to see the mullet-enthusiast return to the edgy style.