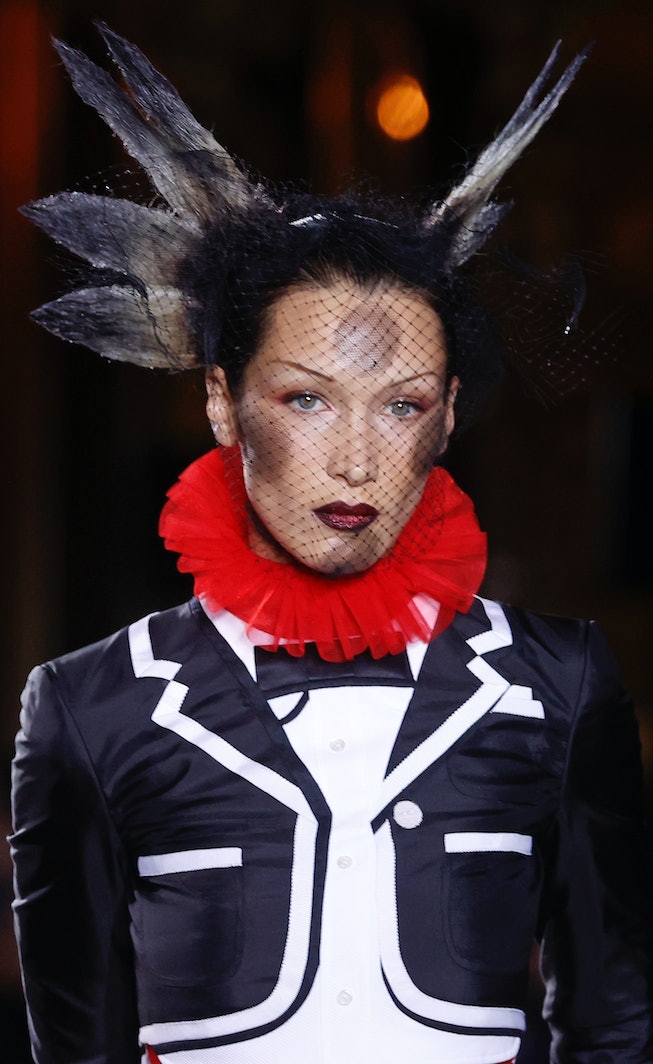 As fashion month draws to a close in Paris, there’s no denying that punk beauty has made its mark this year on the runways year across every city. From black eyeliner in various forms taking over the runways to Balenciaga’s unorthodox face piercings, there’s a spirt of rebellion in the air. Topping off the heavy eye makeup and black lipstick trend was Thom Browne Spring/Summer 2023 runway show, taking place at Palais Garnier October 3rd in Paris. On the runway, Thom Browne took the punk beauty revival to new extremes, channeling harlequin-themed makeup for the punk-rock crossover we didn’t know we needed.

Other models had varying spiky styles, including a classic middle-part mohawk and pointed angular front-facing pieces or teetering updos. Their eyebrows were either thin, line-drawn, or bleached and paired with metallic unconventional lip shades like mint green and lilac. The punk-influenced beauty looks combined with the clown-esque runway looks made for a dramatic and exciting reimagining of old punk-rock trends. Perhaps harlequin-punk will be the next aesthetic to set the internet on fire.

The mohawk became synonymous with punk culture in the 1970s and 1980s, usually including bold painted colors and shaved sides. Other signature punk trends include heavy black eyeliner, neon eyeshadow, dark lipstick or liner, and bleached eyebrows—many of which have already made a comeback this year.

With emo and scene trends already recirculating, along with other aesthetic movements that channel non-conformity, it’s of little surprise that punk makeup is making its way back onto the runways and in the mainstream. If Thom Browne’s show is anything to go by, the resurgence will come with its own spin on original trends. You don’t need to shave your sides to fully commit to the mohawk but can instead just partake in a spiky style or can grab a black liner to accent your red lipstick. Whether or not punk clowns will also have a coinciding moment, however, remains to be seen.