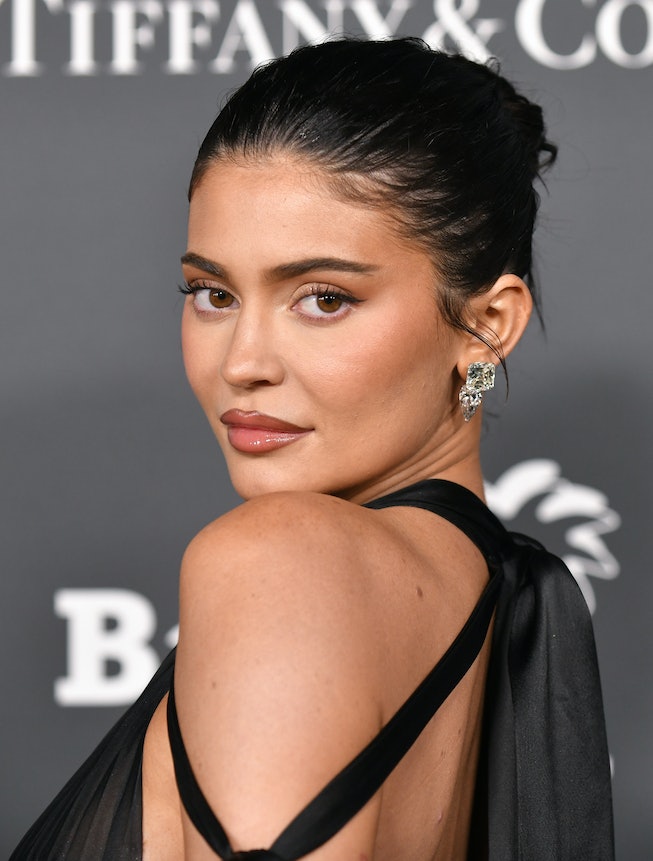 Another day (or year), another celebrity bleached brow moment. Posting a series of backseat car photos on her Instagram on January 4, Kylie Jenner officially confirmed the bleached eyebrow trend will be staying put for 2023. Wearing an an all-black reconstructed denim outfit, a dramatic ’90s-esque updo, dark cat eye liner, and brown-beige lipstick the mogul rounded out the look with what appears to be bleached blonde brows. “Where we going?” she captioned the post, to which her makeup artist Ariel Tejada replied: “we ate”. Tejada also posted some snaps of Kylie’s look to his own Instagram with the caption “Take me wherever you go! 😍”.

Bleached brows have been trending for the past couple years, but have been gaining even more popularity in the latter half of 2022 with celebrities like Julia Fox rocking the bleached brow trend since May last year and Doja Cat shaving off her eyebrows completely to create her (now-signature) brow liner art. A divisive trend, Julia Fox even previously called bleached eyebrows a “man repellant” in a tutorial that she posted on TikTok. "They absolutely hate it,” she says at the end of the TikTok tutorial. “My son’s father gets so triggered by these eyebrows so that’s why I continually do them.”

Kylie isn’t the first in her family to jump on the bleached brow trend. Her sister Kendall bleached her dark arches for last year’s Met Gala and Kim Kardashian bleached hers for her September 2022 Interview Mag cover. Rather than making the full commitment, however, it appears that Kylie may have decided to use a faux-bleached brow trick that went viral on TikTok in 2021, where concealer is used to create the appearance of lightened brows.

It would come as little surprise that makeup entrepreneur Kylie Jenner and her ultra-talented makeup artist Tejada are up-to-date on viral TikTok hacks. With many people using the technique to try out the blonde brow look before making the full commitment to bleach, it also may signal a more permanent eyebrow transition for Kylie in the near future. Until then, Kylie has confirmed that trying out bleached brows—whether real or faux—is the perfect way to start the new year and will no doubt inspire the continuation of the trend’s reign for another year (at least).

NEXT UP
Beauty
“Birthday Makeup” Is Sparking A Battle of The Sexes On TikTok
Beauty
This Viral Black Honey Lipstick Dupe Is Only $5
Beauty
This Hailey Bieber-Approved Blush Now Comes In 4 New Shades
Beauty
Kylie Jenner Is Bringing 1920 Finger Waves to the 2020s
Style + Culture, delivered straight to your inbox.