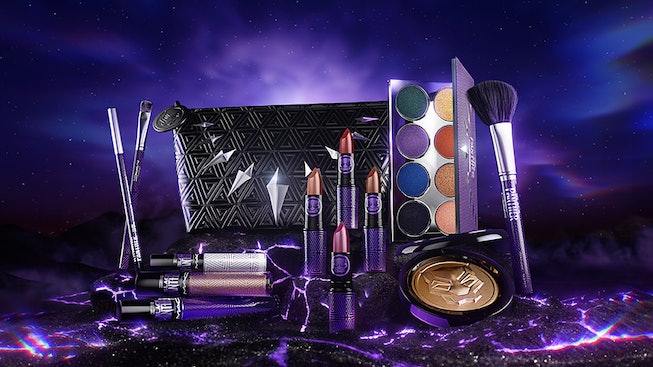 With the new collection, fans will be able to emulate the colorful and supernatural beauty looks created by the film’s lead makeup artist, Nick Barose. “Like the vibrant world of Wakanda, #MACxWakandaForever features lavish, saturated hues that look fantastic on everyone — especially those with rich skin tones,” MAC senior artist Fatima Thomas explains. The full collection consists of 18 products ranging from iconic MAC lipsticks and lipglosses, to an eight-pan eyeshadow palette, liquid and pencil eyeliners, a highlighter, brushes and a cosmetics bag. Every product also features special Wakanda details and colors. Highlights include the vibrant eyeshadow palette decorated with T’challa’s Claw necklace and the blinding highlighter emblazoned with the Black Panther emblem.

Although this is the first launch for MAC imbuing the Wakandan warrior spirit, this isn’t the first time the world of Black Panther has impacted the beauty space with its fierce makeup looks. In 2018, designers brought Wakanda Beauty to NYFW a week before the original movie’s release where models rocked hairstyles and makeup looks inspired by the film. MAC is also well known for their collections created in tandem with some of the most high profile movies and TV shows or inconic characters. Previously MAC has released limited-edition collections with Disney’s Cruella, Stranger Things, Barbie, and Hello Kitty—all of which sold out. So consider acting fast when it comes to the latest Marvel drop.

Sign up to be notified when the Marvel Studios’ Black Panther Collection by MAC will become available on maccosmetics.com. Prices for the limited-edition collab range from $23 for the Eye Kohl to $39 for the eyeshadow palette, so everyone can find something they want to wear come November 11.

Get a closer look at some of collection, below: