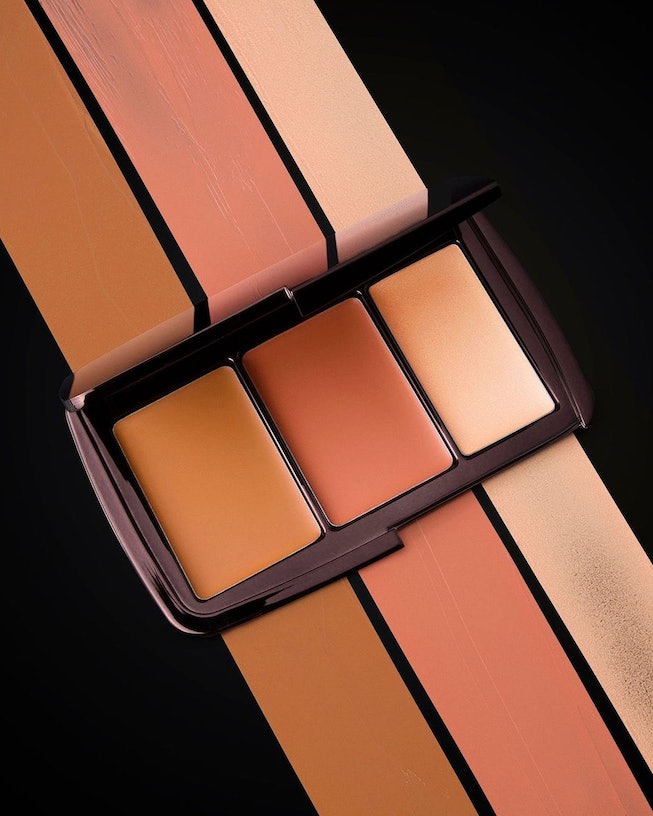 Following this year's Black Lives Matter protests, consumers called on some of their favorite beauty brands (some, not for the first time) to finally address and fix a lack of inclusive product releases. While there is certainly still work to do, many companies had pledged to do better, and some started by making public statements, participating in social media initiatives, and rethinking previous and future releases. Months later, however, Hourglass Cosmetics is facing fresh backlash, as some makeup artists and fans have accused the brand of not doing its part to create products that cater to deeper skin tones.

On November 11, Hourglass relaunched its Illume Sheer Color Trio. Formulated with a new vegan formula, the tricolor palette of blush, bronzer, and highlighter, is touted as a cult favorite on the brand's website. Shades included are described as sheer, neutral, and universally flattering on the accompanying online description.

Although some on social media had reacted favorably to the relaunch, others, including Temptalia and makeup artist Samantha Ravndahl, called on the brand to address the palette's coloring. In a Twitter comment, Temptalia said it would no longer review Hourglass products.

Ravndahl announced she was following Temptalia's lead, writing, "I think it’s important to acknowledge that there are MANY brands that continue to lack in terms of inclusivity. @HourglassMakeup is a brand that I’m particularly personally disappointed in BECAUSE I love them so much for so many other reasons. With their recent relaunch of their Illume Sheer Trio, a personal favourite product of mine, they announced they had taken the time to reformulate this product to be vegan. This product was off the market for an exceedingly long time because of that reformulation. By reformulating, but not extending the shade range at the same time, they made a clear statement about where their priorities lay."

The criticism extended to social media, as users on Instagram wrote, "You are the only brand that isn't releasing products suitable for different skin tones. Why?" and "The lack of shade range is beyond disappointing. Ignoring the feedback makes it worse." Users on Twitter wrote of their decision to no longer buy from the brand, writing, "Look, your products? Great. Your attitude towards POC? Abysmal, do better. I'm not going to be purchasing again unless you make an actual change."

As of yet, Hourglass Cosmetics has not responded to the criticism. However, it's not the only beauty brand that consumers have publicly called on to change. Former Glossier employees repeatedly called for the company to address a workplace of "anti-Blackness, transphobia, and ableism," while Jackie Aina announced she would no longer be a Morphe Brush affiliate, tweeting in July that she would "refuse to align myself with a company that continues to retail antiblack racist beauty brands. I strongly encourage other influencers to do the same!"

NYLON has reached out to Hourglass Cosmetics for comment. See the brand's official launch announcement, below.