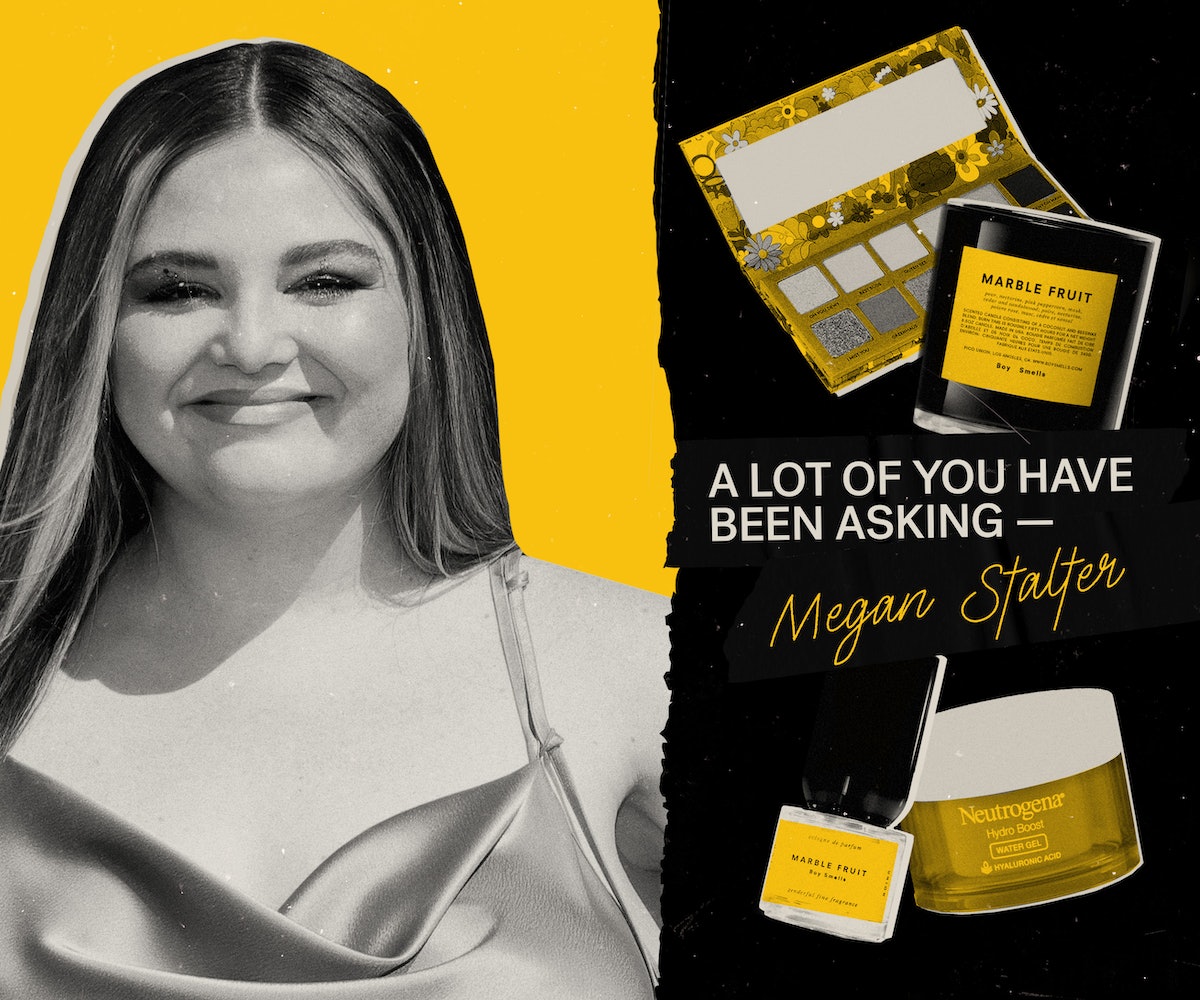 Megan Stalter is having quite the year. She’s a fan favorite playing Kayla, the completely incompetent assistant whose heart in the right place on HBO Max’s Hacks, which just recently wrapped its second season — and has just been renewed for a third. She presented at this month’s MTV Movie and TV Awards. She’s recently been cast in a leading role in indie dark comedy, Cora Bora from director Hannah Pearl Utt. If nothing else, you’ve certainly seen her neon-lined eyes on Instagram Live, embodying some of the funniest characters on the internet. She’s unmistakably an It girl (you heard it from NYLON first) and shows no sign of slowing down.

This month, she also stars in candle and fine fragrance brand Boy Smells’ Pride campaign alongside actor Charlie Carver. The Boy Smells brand DNA is all about existing beyond the gender binary. All of their scents are referred to in the brand’s language as “genderful” rather than genderless. Boy Smells’ 2022 Pride campaign is entitled “Nature Your Nurture,” promoting the brand’s initiative benefiting GLSEN, the leading organization dedicated to ending LGBTQIA+ discrimination in K-12 schools. Through the months of June and July, Boy Smells is donating 15 percent of the proceeds from their best selling Marble Fruit fragrance and brand new Marble Fruit candle to the organization, with a minimum donation of $50,000.

Stalter, who created the viral Instagram video (with nearly 2 million views) captioned, “Corporations this month” spoofing many a brand’s sudden interest in LGBTQ+ customers exclusively in the month of June, said it was a no-brainer decision when approached by Boy Smells. “It was like, ‘Oh yeah, that's the gay candle company that we love.’” She said. “I love their products and they're a company that actually does things for the queer community all year round.”

Below, Stalter talks to NYLON about her growing love of makeup, her favorite characters to play, and what it was like working on Boy Smells’ Pride campaign.

What is your first beauty memory?

The first beauty memory I have is that I was really nervous about it. It's not that I wasn't allowed to wear makeup, but I remember that literally the day I got my period, my mom took me out to buy makeup. Which, looking back, I think is probably weird, but it was sweet. My mom took me out to buy lipstick and mascara. I don't know, it's probably problematic, but it also made it a special day. And luckily, I wanted to like get into makeup, so it was sweet not offensive.

How has your relationship with beauty developed?

It took me a long time. I was kind of a late bloomer in a lot of different ways. Even though I was wearing makeup in high school, I don't think I knew what I was doing. My sister was the one that always knew what makeup to buy and she's really good at it. For years she begged me to buy a good liquid eyeliner — I was buying cheap stuff that always smudged and didn't last. I still swear by some stuff that is cheap, but I was buying the wrong kind.

In the last couple years I've gotten way better. I'm having more fun making myself look the way that I feel inside or presenting the way I want to look. I think that dressing and doing my makeup as a character has been helpful. By dressing a character, it gives me more freedom to dress myself the way I really want to look. I also think about what am I going to wear on stage. I think I've found more style and I've been better at my hair and makeup in the last four years. But every year, it feels like you get better at it. And the more fun you have doing it, the better you get it.

What are some of your favorite products? You always wear the best bright eyeshadow and liner.

Recently, I have gotten really into all of Trixie Mattel’s eyeshadow palettes. They last really long and the glitter stuff is really good. I'm also just such a big fan of hers. We message, but she's the one celebrity who I'm so nervous to meet in real life because I'm going to be so starstruck.

For skin care, I really love the whole Neutrogena Hydro Boost Water Gel line. I really like for night. If I don't have it, then I'll do a lotion, but I really like to gel it up. And the Neutrogena gel mask is the best face mask I've used. It makes my skin feel so soft the next day.

What’s the process like putting together a look for one of your characters?

I have the idea in my head or my little script or know what I’m going to improv on camera, and then I start thinking, “What does this character really look like?” What is the funniest and the most realistic? Because you can really can make it look like this character just made this video. Is it funnier if she has a blonde wig or a big hat? I'm not a wig girl, but I do think it's funny sometimes, but only if it looks like the character's supposed to have a bad wig.

Who's your favorite character that you've done recently?

I love them all, but I really was happy with the costume and the “set” that I made in my house for this video I did as a flight attendant. The costume looked the most realistic I could make it, without buying the actual uniform. I made fake chairs to look like the plane. I mean, it’s obviously fake and bad — and that's part of it, too. I think it’s really funny to think of me, an adult, doing that. Like, “Wow, she really put in a lot of work into this costume.”

I also made a Pride video last year. The “Hi, gay!” video. And this year I did another one. We're back at the butter shop from the first video! This time there's a bunch of candles lit — it looks unsafe — and then there's tons of butter. But something that no one's noticed, or at least no one said anything about it in the comments, but I made my braids really long, almost to the floor, but no one said anything about it, which I think is really funny. It’s supposed to be like she’s never cut her hair.

How was working with Boy Smells?

It's been amazing. As soon as I got asked to do the Pride campaign, I thought, this is one I'd really want to do because I've known them as a queer company that's been supportive of the community. Right away, it was like, “Oh yeah, that's the gay candle company that we love.” I love their products and then they're a company that actually does things for the queer community all year round. I think that's when you get into trouble when a shop or like a big department store does a ton of Pride stuff that makes you think, “But, you haven't really said anything about gay people this whole year.” I want representation, and I want to brands do this, but also I think the way to do it is not just when June comes around.

I had the most fun day of my life on the shoot. I was already excited, but everyone was so sweet and then there was a big, live snake. I fully, fully hate hate snakes, but I bonded with this snake. When I met this snake, I thought, “No, this one is different”. And I felt like I looked like how in Twilight when the person turns into a vampire and they become like the hottest version of themselves.

I do love the Marble Fruit one, so much. I've been using it every single day. I spray it on myself before bed, which I feel like is psychotic. It's a villain move — it’s very rich-woman-in-a-robe, to me. Why wouldn't you spray it on and fall asleep to smelling like that? I think it smells like you're at the reception of a wedding and everyone's drinking champagne and eating fruit.

How are you celebrating Pride this year?

I've just been hanging out with my friends more this month. I think Pride is really about being yourself fully and being around your family and your chosen family and accepting everyone. I just want to be hanging out and laughing.

Do you have a beauty philosophy or a life philosophy?

I think if I do, it’s that, it’s important to know that you don't need any of it. It’s not for becoming what other people want you to look like — because it doesn't matter at all what other people think — it’s really all about having fun and help you look and express yourself the way that you want to.