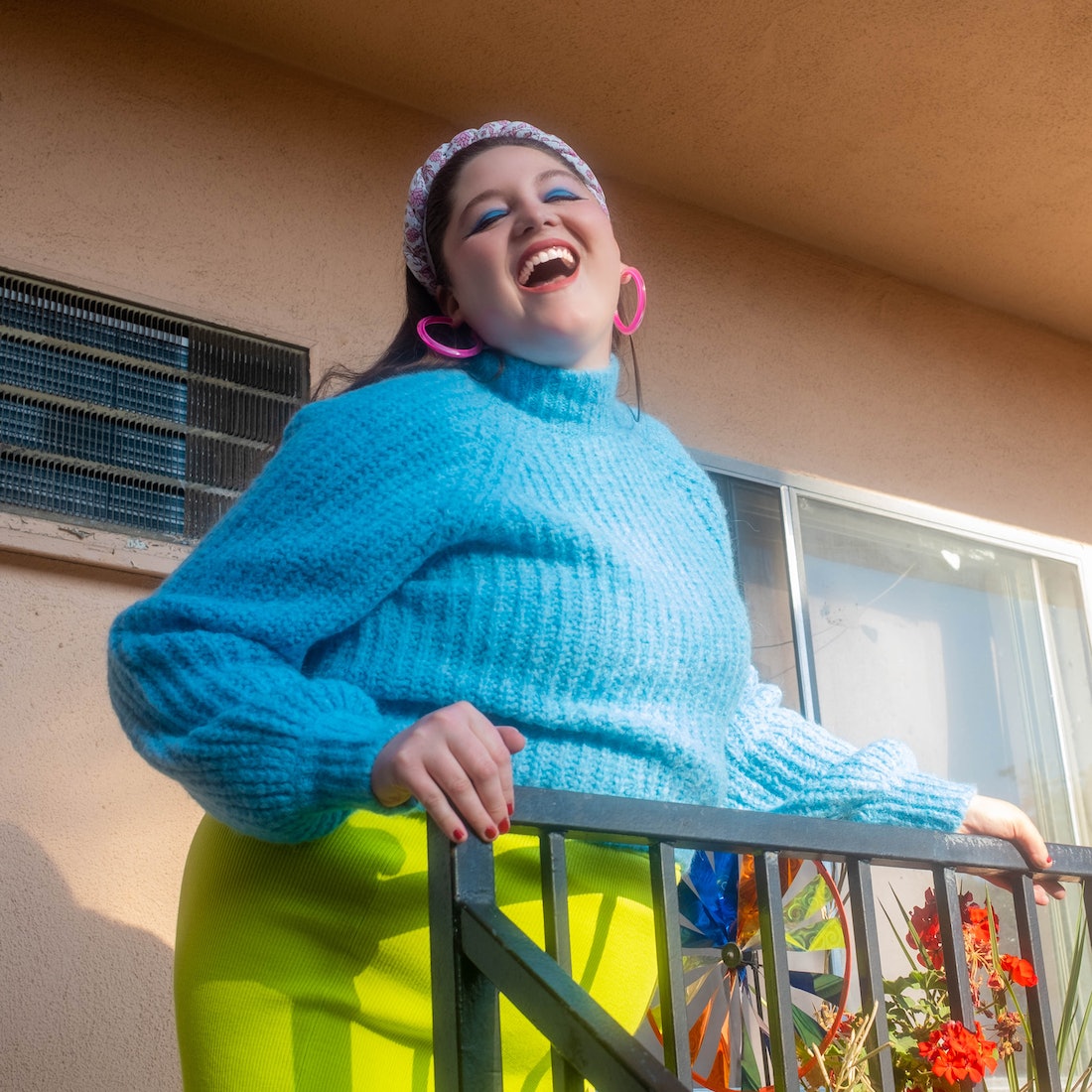 On HBO’s Emmy-winning Hacks, Megan Stalter plays Kayla, a hapless assistant to talent agent Jimmy (played by show co-creator Paul W. Downs). As the daughter of a man who “owns half the company,” the call-interrupting, inappropriate comment-making Kayla is both Jimmy’s assistant and boss, making her a classic Hollywood nepotism trope — and the polar opposite of the comedian who plays her.

Born and raised in Ohio, Stalter is perhaps best known for her often downtrodden, always a bit deluded, and yet somehow hopeful characters. Maybe it’s the Midwest in her, but Stalter can’t seem to help but handle her character creations, many of them Midwesterners themselves, with care. “I just think it's way funnier to play something really real than to be just poking fun,” she says. Speaking over Zoom in a t-shirt and signature bright teal eyeshadow just two days after Hacks won Emmys for Outstanding Writing, Directing, and Lead Actress (Jean Smart) in a Comedy Series, she says, “A lot of characters that are from the Midwest are not bad people, but they just believe in really different things. And I don't know, there's something funny about someone, a character, having something crazy happen, but trying to act like nothing's wrong.”

She adds, “I never want to hurt anyone's feelings. I think the only time I ever felt really bad about a video was a parody I did of Lana Del Rey” — a video released following a string of bad press Del Rey was receiving for some of her own social media posts. In the video, Stalter-as-Del Rey finds herself in the position of having to apologize for saying in an interview that dogs can’t swim. Stalter ended up apologizing in the replies to ruffled Del Rey fans. “I think if she saw it,” Stalter says, “she wouldn't be upset.”

When the video was released at the beginning of 2021, Stalter had already amassed her own engaged fan base. After years spent cutting her teeth in the Chicago improv and stand up scenes, Stalter was working her way through New York City’s comedy circuit when the pandemic hit, and she returned home to Ohio to live with her family. It was then that her character study videos and in-character Instagram Lives that sometimes lasted hours grabbed hold of the Internet’s attention and earned Stalter an online following. While front-facing comedy videos proliferated during this time, Stalter was among a handful of comedians whose bits transcended the algorithm, landing her on rising star media lists and her eventual scene-stealing spot on Hacks.

Hacks tells the story of Deborah Vance (played by Smart), a comedian whose dwindling, multi-decade career in entertainment has led her to a residency in Las Vegas and a distaste for the quiet of her own mind. The show, which also stars Hannah Einbinder as a writer recovering from a brush with online cancellation, gives space to the careers and interior lives of creative women. It’s a fitting environment for Stalter, whose characters and comedy touch on the absurdity that women from all walks of modern life find themselves mired in.

As “the boss that thinks she’s fun but she’s not,” Stalter dons an off-kilter wig as she cracks cringey jokes, trying desperately to relate to her imagined subordinates while also trying to perform the authority her role bestows upon her. As Matt Damon’s daughter giving a press conference following a particularly bad PR cycle, Stalter’s innocent retelling of her dad’s bad jokes and just-excited-to-be-here energy underscores the character’s overwrought privilege as the child of a celebrity. As an “out of work actress talk[ing] about a possible sequel to a movie that came out 9 years ago!!,” Stalter captures the place between a dignified acceptance that things might not have turned out the way one had hoped, mixed with the quiet desperation that somehow, they still will.

It’s this layered, tender skewering of personalities made extra-familiar online that is Stalter’s signature. “We have so much access to observing people,” the comedian notes, thanks to the millions of people using social media platforms to share moments from their lives. “The last couple of years has been really fun for comedy because so many people — normal people that aren't trying to be comedians — are online, making videos on TikTok,” she adds. Rather than be overwhelmed by the deluge of content, Stalter sees it as a sea of possibility.

“Everyone's putting themselves online whether they're comedians or not,” she explains. ‘There's nurses that are doing TikTok videos. That's what I think is funny, realistic people, and we're able to see them all the time now on our phones.”

On Hacks, Stalter gets the opportunity to flex her acting skills, but she brings the same sensibility to her character Kayla, making her feel like just another player in Stalter’s rotating inner ensemble. That’s partially due to the fact that Stalter was given the freedom to adlib much of her role. “The dream,” she notes for the future, “is to be on a show like Hacks, where you are with people that love to improv too. Paul, Lucia, and Jen are just so amazing at letting us do that, so there's an amazing script that we're already excited to do. And then they also let us improv every scene I was in. They would say, ‘Okay, now do what you want. Just say what you want here. Go off here.’”

And while a new world has been opened up with Hacks, and Stalter’s palpable enthusiasm could easily translate into more ‘serious’ roles, she says that she never wants to lose the organic connection she’s created with her audience online.

“I think you have to set boundaries for sure,” she says, “but I never want to feel so out of reach. There's a connection to the people that follow you, especially after the pandemic. And I have so much fun doing the lives. I just really don't want to stop doing them. I definitely have to do less of them than I was, and less posting the videos, but I'm just having so much fun.”