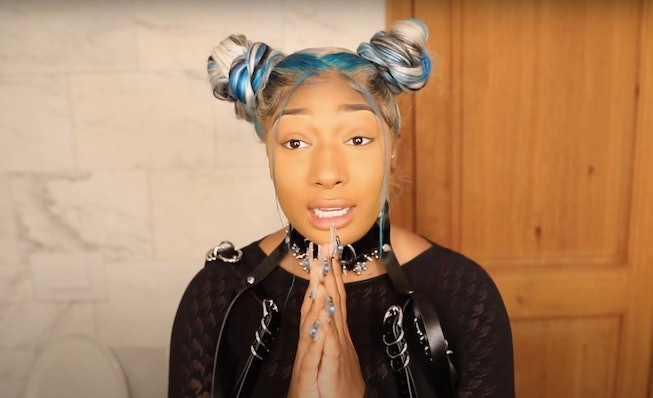 Just days after being named the newest Revlon Global Ambassador, and Megan Thee Stallion is already taking her new role in the beauty world super seriously. In the midst of ongoing promotion for her new joint single with Cardi B, the rapper took some time to share her first ever makeup tutorial, and she shared her secrets for getting the perfect cut crease.

On August 10, Thee Stallion shared a YouTube tutorial compromised entirely of Revlon products — none of which cost more than $15. "Thought I’d share my hot girl hack to getting my cut-crease," she captioned the clip.

Before diving into the beauty process, Megan begins with a warning. "I've never done a makeup tutorial," she says. "The way I do my makeup is not typical." She further explains, noting that she never really starts her routine with any set plan or look in mind, rather, she prefers to "go as we go."

The idea of applying your face without a set plan is somewhat unconventional, but Megan makes it work, creating the look that she wore for her Revlon campaign. Her secret to completing a proper cut crease comes down to concealer application. As she explains in the clip, she applies concealer to her eye crease, which enables her to more accurately identify and define the crease.

Megan further explains that while many use concealer under the eyes to hide darkness, she finds that it cracks too much when applied. Instead, she covers under her eyes with a lighter shade of foundation, noting that it works better for her "naturally oily skin."

She closes the video with a tip for fuller lips, suggesting that you use an angled brush with liner to more fully outline the mouth after applying lipstick. "Look how my lips just popped out like that," she says.

Perhaps not a YouTube MUA by trade, but for a first attempt, she's already earned the support of social media. "Thee best makeup tutorial," one Instagram follower noted, while another person was ready for a sequel, writing, "More please!! Love seeing your process cuz you be laying that cut crease down babe!"