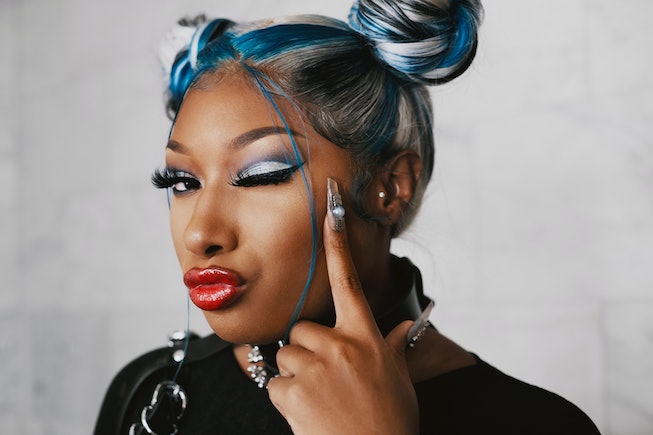 Revlon announced Megan as its new Global Brand Ambassador in a press release, confirming that her status as a tastemaker, as well as her confidence and ambition drew them to working with the performer. The rapper joins previous Revlon ambassadors including Sofia Carson and Adwoa Aboah.

Prior to making the news official, Revlon teased the announcement via its Instagram, and fans quickly identified the mysterious lips and eyes. As Allure reports, makeup for the campaign, which featured Thee Stallion wearing a bold red lipstick, liner, and a slightly smoked out eye, was completed by the rapper herself.

For her ambassador duties, Megan told Allure that she intends to bring "H-Town" vibes to her role. "To have the opportunity to be that role model and to champion real diversity is something that's real special to me. The whole concept of this campaign fits so well with the Hot Girl lifestyle; having fun, being confident, living your truth, and, most important, living boldly," she said.

Sharing news of the role on her Instagram, the star promised fans that this was only the beginning. "HOTTIES YOU ARE LOOKING AT REVLON’S NEW GLOBAL BRAND AMBASSADOR," she wrote. "We definitely have some hot thing’s coming soon for all my hotties and I’m so excited to for all of y’all to live bold with me."

For those looking to incorporate Megan's makeup style into their own beauty routines, the "Savage" performer shared some of her must-have Revlon products. "Real Hot Girls stay active no matter what they do, so I gotta keep a liner that won't budge throughout the day with me," she explained. Sharing that she often relies on portable-friendly beauty products, Megan also told Allure that she loves lip gloss and an eyeshadow palette that's touch up friendly.

News of this latest industry collab comes after Fenty x Savage named Megan Thee Stallion as its newest brand ambassador. For that role, she appeared in campaign images for the brand's summer 2020 releases.