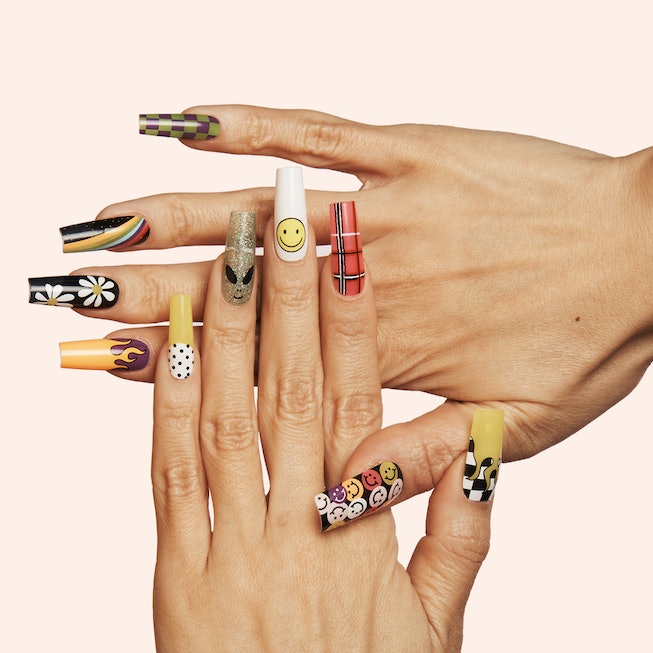 There's finally hope for those that have long admired Dua Lipa's epic manicures, but could never properly recreate the artwork. ManiMe — the brand behind 2020's most innovative stick on gel nails — has teamed up with celebrity nail artist Nails by MEI (Mei Kawajiri) for a collection of celebrity-approved nail art.

Nails by Mei has been behind some of 2020's biggest manicures, and this collaboration allows you to get the look for less than $30. Dropping December 8 on Manime.co, the collection includes three new patterns in ManiMe's stick-on gel nails.

The first pattern, called Love Wins, features a set of sheer, rainbow-colored nails with white starbursts. The semi-sheer multicolored manicure also comes with a manicure prep set, which is included in every manicure pack, and features tools needed for application.

The second sticker set, called Let's Link Up, was previously spotted on Dua Lipa's nails. The glossy manicure features a navy background with white stars and raised gold chains. For the final look, you're invited to celebrate with a set called Mei's Party. This set is all about clashing colors and patterns, with 15 different stickers, including an alien face, plaid patterns, lots of smiley faces, and flame artwork.

ManiMe announced the launch as part of its Glow Up collection, which also features new nail artwork from Bana Jarjour, also known as Banicured.

See the stickers in action, below.