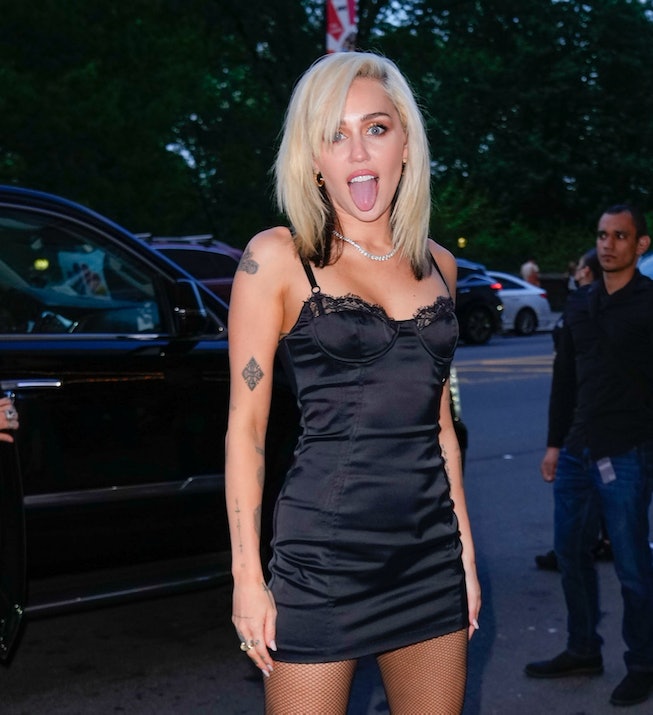 Miley Cyrus has undoubtedly always had iconic hair (hello, Hannah Montana) but she’s recently been singlehandedly bringing back some of our favorite—and most divisive—Y2K hair trends. She was early to the mullet revival last year and has since grown out her hair and been rocking 2000s-inspired black lowlights in her now signature platinum blonde hair. While it seems like the extreme contrast lowlights are here to stay for a while, she did recently switch up her haircut to channel yet another Y2K trend. In the past week, Miley has debuted a new straight lob with long side bangs.

Miley revealed her new hair at an NBC dinner in New York City on Sunday, where she wore a black mini dress and her hair straightened. Usually the queen of a modern messy shaggy style, the sleeker hair look was a change for Miley, but it still showed off her layers and dark lowlights. The singer wore her lob-length hair in a side part, with a sweeping side fringe that reminded us of Y2K high school hair and Tumblr days (love it or hate it).

TikTok has previously declared the side part “dead” over the past couple of years, Miley’s new nostalgic hair shows that the current Y2K beauty revival might soon convince many to ditch their middle part and their bang-free lifestyle. She is also joined in this trend by the likes of Bella Hadid, who fluctuates between a slicked-back middle-parted ponytail and a half up-do with a styled side bangs.

Miley also posted her new hair on a night out with icon Pamela Anderson while wearing a glittery gold dress and large rock-and-roll sunglasses. Her sister clearly approved of the new look, commenting on the post “The hair is FIREEEEEEE damn 🔥.” Vanessa Hudgens chimed in, calling Miley an “icon.” While it’s still in the early stages of the comeback, it’s clear the internet is still torn between side parts and middle— and also can’t decide between sleek straight hair and grunge texture. We suggest taking a page out of Miley’s book and experimenting with both.

NEXT UP
Beauty
Dua Lipa’s ’90s Updo Is Hair Inspo For Your Next Night Out
Beauty
No One Does #PamCore Beauty Better Than Pamela Anderson, Herself
Beauty
Megan Fox Is Completely Transformed By A New Blonde Bob
Beauty
Kylie Jenner Is Bringing 1920 Finger Waves to the 2020s
Style + Culture, delivered straight to your inbox.