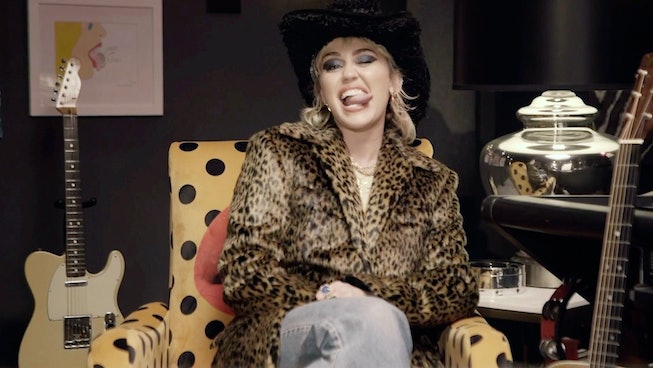 Miley Cyrus isn't slowing down yet. Her year has already included the release of a brand new album and countless changes in hair, but Cyrus is now focused on adding to her collection of tattoos. Within the last few days, Cyrus got three new designs inked, with each one dedicated to a special person in her life.

Based on social media posts, it appears that within the last few days, the performer paid a visit to two separate celebrity tattoo artists. The grand tattoo tour seems to have started with two new designs from artist Nico Bassill. For her first piece, Cyrus chose a design inspired by Plastic Hearts collaborator, Billy Idol. On her lower arm, Bassill added Idol's "Idolize Yourself" logo. For her second Bassill tattoo, Cyrus looked to her mom, and added a woman in a cowboy hat with the words "Mama Tried" to her opposite arm.

Only a day later, on Saturday, December 19, tattoo artists to the stars Dr. Woo shared a picture of the motorcycle he had recently added to the singer's shoulder. In an accompanying Instagram caption, he explained the significance of the design, writing, "Got her pop’s bike on her."

At last estimate, Cyrus had 74 total tattoos, and her motorcycle isn't the only artwork inspired by her dad. Back in 2017, she got a foot tattoo along her inner arch that simply read "dad." Her remaining collection of ink features a tribute to her grandmother, a miniature avocado, a tiny skull on her right ankle, and the word "love."

See her newest tattoos, below.