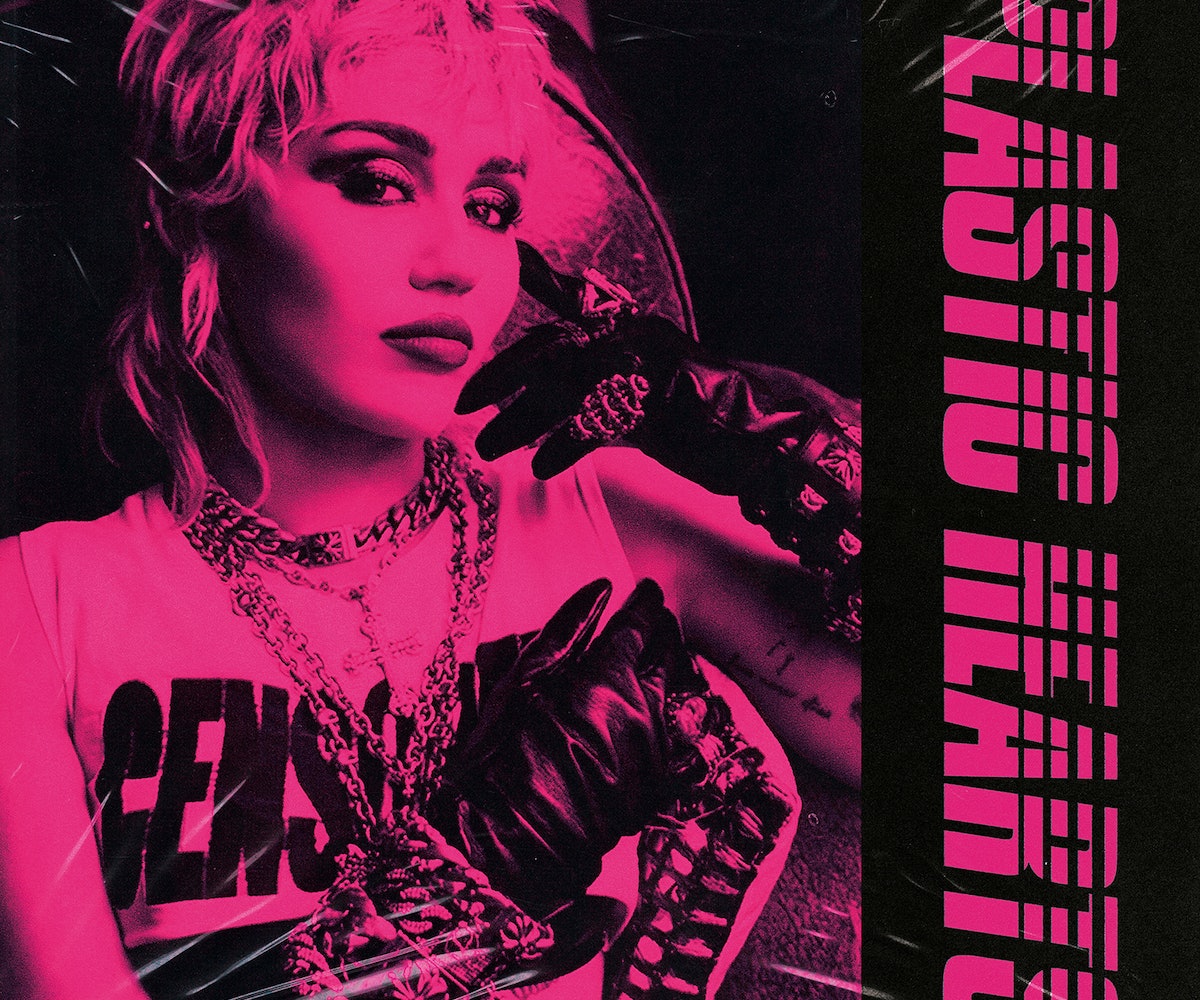 Miley Cyrus’s vibe has often been about wanting more. Since the end of her star-making Disney Channel show Hannah Montana — which itself was about a middle-schooler who harbored a second identity as a fireball pop singer — her music has indulged in genre spelunking. Sometimes that meant ersatz-twerking to Mike Will beats during her widely-critiqued Bangerz era, or experimental psychedelia collaborations with Flaming Lips’s Wayne Coyne, like on her album Miley Cyrus and Her Dead Petz.

Her latest and seventh studio album, Plastic Hearts, is another sonic turn, this time toward classic rock slicked in pop’s high gloss. It also feels like it was an inevitability — the grown-up version of early aughts, post-Hannah tracks like the light pop-punk “7 Things” and the emotional “The Climb,” the teen who got to sing “Bad Reputation” with Joan Jett on Oprah finally coming home to roost.

The pop star’s last full-length record, 2017’s part pop-rock and part country album Younger Now, was weakly produced and belied her range and the legacy of bold-hearted authenticity bequeathed to her by her godmother, Dolly Parton. Sterile lead single “Malibu” was a paean to her reconciliation with then-fiancé Liam Hemsworth and the SoCal coastal home they shared. But a lot has happened in the interim years. Their house was tragically destroyed in the 2018 Woolsey fire, and Cyrus and Hemsworth’s divorce was finalized in January of this year.

On Plastic Hearts, Cyrus isn’t rising from the literal ashes so much as she’s singing to them — in self-reflection of her wildness and in gratitude for feeling like herself and feeling creative in spite of it all. In other words: This time, she hasn’t settled. She turns to decades-aged rock tropes and brings along with her big-time contemporary collaborators Mark Ronson, Post Malone producer Louis Bell, and Dua Lipa, plus icons like Billy Idol and Joan Jett. It is a pop polyglot’s playground, one where she sounds comfortable and embodied — but there is no mistaking it's pop music. It may be more spirited than recent downcast trends in the genre, but aside from the excellent lead single “Midnight Sky” and Lipa duet “Prisoner,” a measured invocation of the Police and Miami Vice, it’s super-fun and super-cheese.

Opener “WTF Do I Know” is clear-throated invective of the fallout from her brief marriage to Hemsworth over power-pop-gleaned riffs. Miley intimates a relationship mired by nose drugs and threesomes with randos, capping it cheekily on the chorus: “What the f*ck do I know? I’m alone.” It’s an ample mission statement for an album that contemplates the past. Acoustic country track “High,” a standout, finds her craving memories that won’t come back, using her signature rasp to accentuate the longing.

What Miley does with her voice throughout the album is really its main attraction. On “Night Crawling,” she matches the same dark, singing-from-the-crotch range of her guest Billy Idol, while Jett’s and Cyrus’s voices meld into one on “Bad Karma,” which also features shreddy guitar from indie rock luminary Angel Olsen. Even on “Prisoner,” Miley complements the sumptuousness of Lipa’s voice by smoothing out the edges of her own.

It’s her most exciting record, if only because it's so all-in.

It’s a reminder that Miley has always been good at attracting people to work with her, a trait that has led to strange past missteps: a remix of Kanye West’s “Black Skinhead” and her former working relationship with Terry Richardson, who’s been accused by many women of sexual misconduct, to direct the video for “Wrecking Ball” and photograph her Bangerz era. With each new Miley moment, there is always the intrigue of her new sound, and what else she might add to the baggage of past mistakes — or things construed as mistakes — that never seems to go away.

What may be the most refreshing thing about Plastic Hearts is not how excited Miley sounds in the music, but that the only thing she’s really done wrong is revive ’80s soft-rock schmaltz, heard on mid-album cuts “Never Be Me” and “Angels Like You” and the odd lullaby of a closer, “Golden G String.”

Lyrically, “G String” is a tepid tongue-lashing about tabloid fodder in which you can almost hear her eyes rolling over the coverage of her own exploits: “There are layers to this body / Primal sex and primal shame / They told me I should cover it,” she sings. Sure, it must undoubtedly be exhausting to have your entire adolescence available for public dissection, but it’s also hard to feel empathy for Cyrus due to her money and access. Throughout the record, Cyrus challenges the public backlash to her naked body — a theme she’s tread since her back was exposed on the controversial 2008 Vanity Fair cover, shot by Annie Leibovitz. At 15, Miley was made to apologize for it. Ten years later, Miley retracted her sentiments, tweeting “IM [sic] NOT SORRY, F*ck YOU.” Given her history, it begs for more nuance, less repetition, and a closer look at how it feels to be scrutinized like that, and not just that she has.

However, impulse is Miley’s brand, and one could still hope that level of contemplation may yet still come. For now, she is fiery in her confessionals and has finally found the sound that makes it all snap together — her sweet spot. Even when things are a bit too saccharine on Plastic Hearts, she’s still all commitment. It’s her most exciting record, if only because it's so all-in.