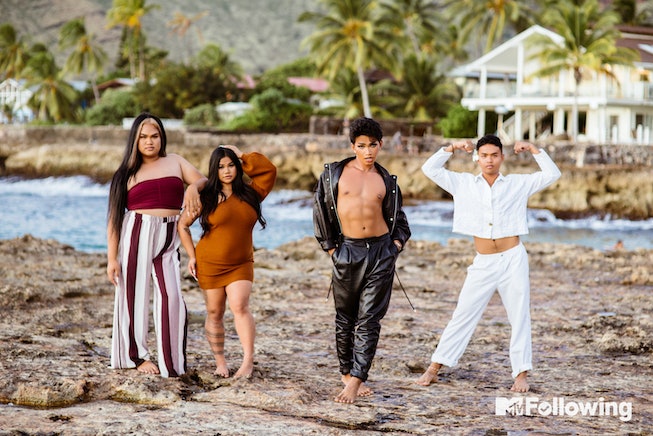 Following its filming announcement last year, the release of Bretman Rock's reality television show is finally happening. Premiering on February 8, "MTV's Following: Bretman Rock" gives an unfiltered look at what the 22-year-old Filipino-American creator's life actually looks like — and much like everything Rock puts out, the series doesn't showcase the typical influencer story.

Instead, it follows Rock's life in Hawaii — where he's lived since his family moved from the Philippines when the creator was just seven years old. There aren't any flashy parties, influencer collaborations or cameos; and for the most part, despite his beauty background, Rock isn't glammed up throughout the episodes. Instead, "MTV's Following" will take you on chaotically funny car rides with his very "regular degular" friends (their words, not ours), scuffles with his sister, emotional moments with his mother, and even the heavy aftermath of his dad's recent passing — all filmed both before and during the COVID-19 pandemic.

Rock has long had the ability to be one of the few influencers that feels like a friend through the screen, and in "MTV's Following," that feeling is evident. During a time when so many of his contemporaries continue to be called out on a weekly basis for wasting COVID tests for parties in Los Angeles and disregarding regulations, watching Rock live with and for his pod of loved ones, riding the wave of emotions life has thrown us on in the last calendar year, and making the most of life on his beautiful home island as genuinely refreshing as it is entertaining.

Ahead of the show's release, Rock spoke with NYLON over Zoom about filming, coming into his own power, and why he thinks the show is a mix of "The Osbournes" and Paris Hilton and Nicole Richie's "The Simple Life." Check out the trailer below, and read on for highlights from our conversation.

What reality shows did you grow up on that you were thinking about going into production?

To be honest, I kind of skipped over watching cartoons, and reality TV shows raised me. Literally, in fifth grade I ran home from school and watched "Jersey Shore" every Thursday, girl. So honestly, with MTV, I just wanted to kind of bring in my love for reality TV shows. I feel like my show is kind of like a mixture of "The Osbournes," the first family reality show, mixed with "The Simple Life" with Paris Hilton and Nicole Richie, with my sister and I. It's kind of all over the place.

I love that the show is based in Hawaii, when a lot of your contemporaries are in New York or LA. Why was it important for you to show your most authentic life, at home with your real friends and family?

Thank you so much for that point, by the way, because I feel like before my first meeting with MTV, I told them that I wanted the show in Hawaii. A lot of times when I told them that, it kind of got pushed back because of budgeting. Obviously, it's just harder to throw them on the Island, but I thought it was so important to capture what my real life is because there aren't many influencers in Hawaii — especially influencers that live the island life. People think that our lives here are the same as in LA and they're really not, and it's not because I have real friends.

I don't have internet friends, you know what I mean? My internet friends are not my real life friends. I just thought it was really important to be genuinely myself and I was not going to f*cking film that show in LA, girl. No way. F*ck that.

Before the pandemic, how much were you immersed in that coastal world?

I have an apartment in LA, so I was bicoastal pre-COVID. I still have my apartment there, but I was in LA pretty much a week out of every month. I was in LA the first week and then have Hawaii to myself for three weeks after that. So that's just how it was before COVID but now, thank God, I don't have to travel to LA that often anymore because I'm not a big fan of LA.

Has being home changed your perspective on how you see your life playing out for the next couple of years?

Yes and no at the same time. These [Zoom] press runs are kind of hard to do back home, but at the same time, I just notice how independent I am [during] COVID. I just feel like I don't need to be surrounded by so many other influencers to do collabs and to be popping. I could make my own content by myself with my friends and my family that actually live with me instead of having this fake lifestyle in LA with a bunch of people doing collabs, which is really not that cute, especially during COVID.

Last time we talked, you mentioned wanting to remove yourself a bit from the beauty influencer world. Are you hoping that this show helps your audience separate the two?

You know what? I hope so. To be honest, on the show, I barely wore makeup because, like I said, I wanted to capture what my life is, and I'm not in full glam right now.

I don't necessarily hope that my audience [stops] associating me with beauty because to be honest, I'll always be beautiful. I'll always be that beautiful boy. You know what I mean? I'll always be that makeup boy, but really, all I wanted to do was capture what my real life is and where I come from, why I am this way, because I feel like a lot of people question why I act the way I act. People don't realize that it's because I literally grew up differently than most people that you guys see online. I'm not the same as them. I didn't grow up the same as them.

Speaking of how you grew up, what was it like filming with your mother and some of the older folks in your family?

You've been in the game for so long now. If you were to split your career up into chapters, what would you call this new one and what are you hoping to get out of it — and give people as well?

Honestly, ever since this influencer life started for me, I feel like every year is a new chapter. I think this year I am just coming in. I would call this chapter Finding My Power, definitely, because I feel more powerful at this time, not just with my energy, but with what I want to do. I feel like I finally am coming into this Bretman Rock star that I always thought that I was. Even though I feel like I've always been stepping into it, now I just feel like, "Wow. I'm a f*cking star and it's my time to show the world, really."

MTV's Following: Bretman Rock premieres on February 8 at 4pm ET, with new episodes dropping on Mondays for six weeks on the MTV YouTube.