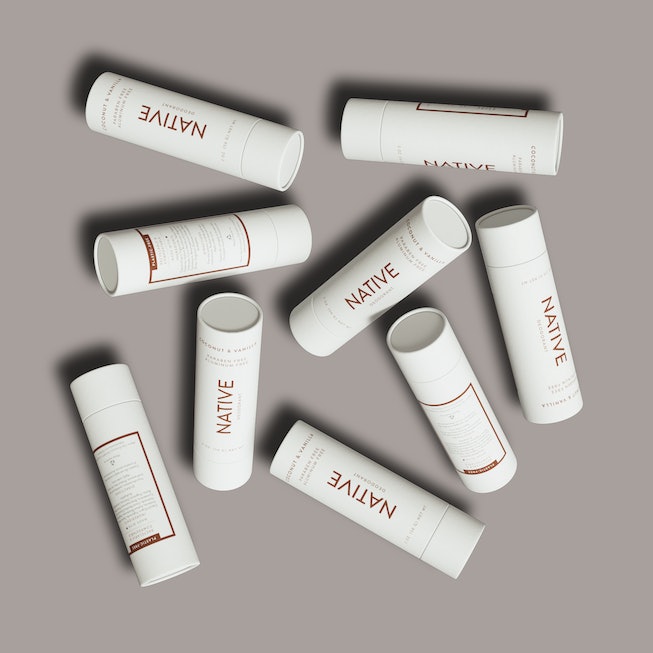 When carefully displayed on your shelf or quickly applied as part of a daily routine, it's easy to give only a passing glance to the packages your products come in From palettes to lipstick, many beauty staples come covered in plastic, and the eventual disposable of the material is contributing to major environmental issues. However, some companies are making a change, including Native, which just announced it intends to go entirely plastic-free by 2023.

Beginning today, June 23, Native unveiled a plastic free overhaul of its popular aluminum-free, natural deodorant. Five of its current scents — Coconut & Vanilla, Lavender & Rose, Cucumber & Mint, Charcoal and Citrus & Herbal Musk — will feature the new, environmentally friendly packaging, and each deodorant retail for $13. Plastic version of these scents will also remain for sale, the company noted in an Instagram comment.

In a press release, Native explained the plastic-free deodorant will be made of 100 percent paperboard and 0 percent plastic. The Plastic paperboard component is made from wood harvested from responsibly managed forests that provide environmental, social and economic benefits. Native now intends to switch all of its other products to plastic-free packaging by 2023. The brand also sells toothpaste, bar soap, and body wash.

As part of the company's plastic-free promise, Native also announced its giving one percent of the sales of its plastic-free deodorant to "benefit nonprofits focused on environmental stewardship." There's no word on a confirmed nonprofit, but the company said on Instagram that more was to come.

From packaging to components used in the creation of product, the beauty industry produced an estimated 76.8 billion plastic packaging units in 2017, Teen Vogue reported. Using plastic, and then eventually tossing it away, contributes to the death of certain sea animals and leads to negative environmental impacts, including carbon emissions.

Brands including Meow Meow Tweet, Plant Makeup, and 552M are among those joining Native in a reduction of plastic use. While some companies like Supermello and Australian Glow use recycled ocean waste plastic in their packaging, other brands like Lush and Tata Harper rely on zero-waste packaging or glass bottles.

NEXT UP
Beauty
September 2022’s Best Beauty Launches Will Keep You Cozy And Cute Throughout The Fall
Beauty
Two Gen-Z-loved Brands Have Collabed On an Otherworldly Fragrance
Beauty
30 Latinx-Owned Beauty Brands You Will Love
Beauty
My New Favorite Beauty Hack: Custom-Fit Whitening Trays Without The Dentist