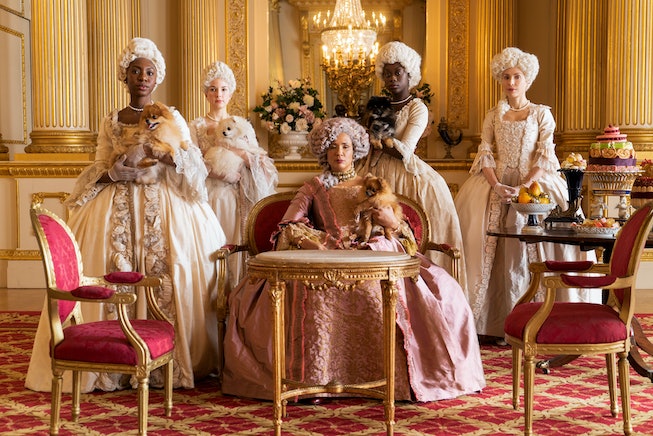 Netflix viewers have quickly fallen in love with the sex and scandals depicted of the streaming service's newest series, Bridgerton. Mere weeks after the period piece debuted, and social media is officially captivated, sharing their thoughts on every aspect of the series, including the glam.

As Pilcher explained to NYLON, he based the looks on books and paintings of the period, but also chose to incorporate more current influences. "I draw ideas from old movies that most people have never seen, I grew up watching Hollywood musicals and old black and white movies," he said. "I created my vision of the period, but to suit each character."

He acknowledged the importance of hair and makeup in telling the Bridgerton story, especially when it came to Daphne Bridgerton's simple, natural look. Basing her routine off Audrey Hepburn in War and Peace, Pilcher adapted the '50s styling to the Regency era. "Obviously I cheated a little, including Daphne's bangs these were not common in this period, but you can find evidence of them in paintings," he said. As for the show's makeup, including that worn by Daphne, Pilcher relied on straightforward looks, giving many characters the appearance of a peaches and cream complex.

Daphne, along with her sister Eloise and mother Violet, required unfussy, elegant looks, but when it came to the Cowper and Featherington family, Pilcher had a bit more fun, particularly with the appearance of Cressida Cowper.

The story of Cressida was told through her hair, Pilcher said. "The Cowper’s are the wealthiest of all the families, so I wanted to show this in the styling. I based Cressida on Nellie Olson, from Little House on the Prairie," he said. "All girly ringlets and sugary-sweet on the outside but mean and bitchy on the inside. I made flowers and bows of hair to build these sculpted creations, filling the basket weaves, like a horn of plenty, toped off with pretty ribbons."

At one point, Cressida's braids hinted at her intentions for Prince Friedrich. Pointing to a style worn by the character in episode three, Pilcher revealed that he sculpted the character's wire braids into the shape of a crown, which hinted at her desire to be the princess.

When it came to the Bridgerton character with the most intricate beauty routine, that honored belonged to Queen Charolette. "I am most proud of the Queen's wigs," Pilcher said. "They were the biggest challenge, mainly due to the time factor of having to create these monumental wigs, whilst filming at the same time." Pilcher told NYLON that in styling the Queen's hair, he had incorporated elements intended to celebrate her descent, including dreadlocks and an afro-inspired wig.

Creating the ready for Netflix looks required early morning call times for the actors, and those involved with hair and makeup tried to allow for 30 to 40 minutes to complete looks worn by the men, and one to two hours for styling the women of the series. Of the steps in the beauty preparation process, it was the wigs that came with a special set of challenges. "The Queen's wigs are all dressed in advance, so [they were] much quicker to apply, but with characters such as Phillipa and Daphne, the whole wig is required to be dressed on their heads using their own nape hair for reality. The lovely Harriet [Philippa Featherington] allowed us to dye her nape hair red for nine months, to help us. That's dedication," Pilcher said.

For now, there's no official word on whether viewers will be able to escape into a second season of the steamy period drama, but with all these new secrets and beauty moments to look for, a rewatch of the first season might just be in order.