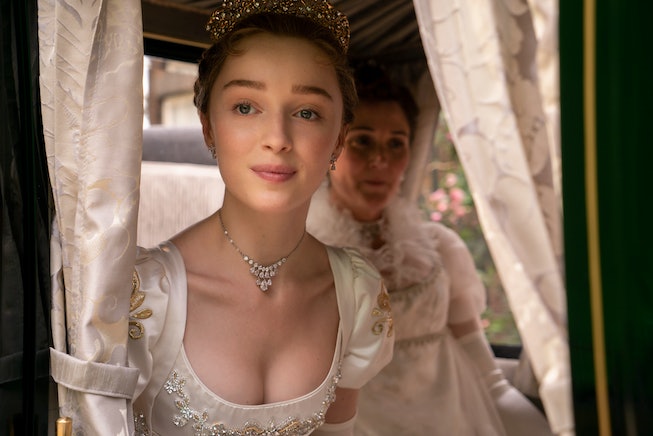 It's been over three years since ABC's beloved super-producer Shonda Rhimes (of Grey's Anatomy, Scandal, and How To Get Away With Murder fame) left the primetime network for greener pastures at the notoriously more producer-friendly house of Netflix, which gave her a whopping $150 million deal. But unlike Ryan Murphy, who signed a similar deal with Netflix before immediately rolling out new content, Rhimes has taken her time crafting her slate of original shows, the first of which, Bridgerton, finally received its first teaser trailer today.

Produced under Rhimes' famous Shondaland imprint and based on the bestselling novel series of the same name, Bridgerton is a period piece that follows "Daphne Bridgerton (Younger's Phoebe Dynevor), the eldest daughter of the powerful Bridgerton family, as she makes her debut onto Regency London’s competitive marriage market," according to a press release. "Hoping to follow in her parent’s footsteps and find a match sparked by true love, Daphne’s prospects initially seem to be unrivaled. But as her older brother begins to rule out her potential suitors, the high society scandal sheet written by the mysterious Lady Whistledown (voiced by Julie Andrews) casts aspersions on Daphne. Enter the highly desirable and rebellious Duke of Hastings (Roots' Regé-Jean Page), committed bachelor and the catch of the season for the debutantes’ mamas. Despite proclaiming that they want nothing the other has to offer, their attraction is undeniable and sparks fly as they find themselves engaged in an increasing battle of wits while navigating society’s expectations for their future."

Judging by the trailer, the resulting series is like "Gossip Girl but set in the 1800s," thanks to its focus on a group of messy, drama-addicted, over-privileged teens who find their worlds turned upside down by the arrival of an anonymous gossip columnist who starts obsessively tracking their lives. Additionally, like Gossip Girl's Kristen Bell, Julie Andrews, who voices the anonymous columnist, is only heard, never seen. The only thing separating the two shows, in a way, is Bridgerton's period setting, which is understandably a far cry from the ultra-modern decadence of The CW's wildly popular mid-aughts drama. Perhaps more importantly, though, Bridgerton separates itself from the pack by ignoring the common Hollywood idea that Black people don't belong in period pieces. People of all races appear throughout the 70-second teaser trailer, which is more than can be said about many similar period dramas.

Check out the spellbinding trailer below. Bridgerton premieres on Netflix on Christmas Day.