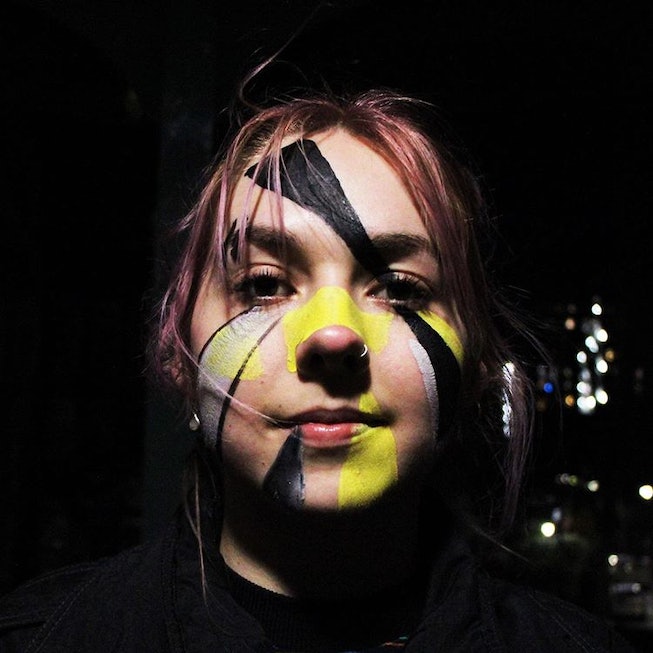 The global range of protests — sparked by the recent murders of George Floyd, Tony McDade, and Breonna Taylor, among many Black lives lost at the hands of the police — has amplified several important issues about systemic racism. Underlining the multiple discourses that challenge the unjust power of police and law enforcement is the issue of racial bias in surveillance tech.

Activists have taken it upon themselves to work against it, as images of spirited protestors with their faces artfully painted have shown up across social media. Known as the "anti-face," activists have devised makeup, face paint, and accessories that aim to thwart detection by the authorities.

“Facial recognition uses probe images that can come from CCTV, bystander videos, police body cams, or nearly any other sort of camera,” explains Albert Fox Cahn, Esq, executive director at S.T.O.P — a project that aims to end “discriminatory surveillance.” “It works by measuring key distances from fixed points on the face, creating a mathematical model of each of our faces. With anti-face, individuals use makeup, bangs, and other face coverings to defeat the facial recognition model. Some types of facial coverings, such as a full-face mask, would prevent the algorithm from even recognizing that a face was present, let alone making an accurate match.”

For years, police and law enforcement agencies have had access to advanced facial recognition tools that enable them to keep track of civilian activities, and arrest potential criminals, but the system isn’t exactly accurate. Just last year, an independent study found that four out of five people identified as suspects by the London Metropolitan Police’s facial recognition systems were actually innocent. The report further attested that the software is 81 percent inaccurate, and often matched faces of lawful citizens to those on a wanted list. The inaccuracies, however, exist beyond the errors of just one software, and with the evolution of AI, multiple methods are now being widely used (and abused) by local law enforcement agencies across the world.

But with zero actionable change in sight, the responsibility of fighting the injustice has fallen to the people. One of the most popular anti-face camouflages — that eventually became a breakthrough in anti-surveillance tech — was developed by artist Adam Harvey as part of his NYU thesis in 2010. “CV Dazzle” or computer vision dazzle as he calls it, is an open-source toolkit that facilitates techniques that use makeup, hair and accessories to create asymmetry that would obstruct the detection algorithms.

London-based The Dazzle Club — a partnership between AiR and artist duo Yoke Collective — combines this unique face painting technique with “silent walking.” The group now organizes monthly walks along with discussions that centre around how artists can come together to fight back against surveillance.

“The main aspect of CV dazzle is to throw off the kind of expected symmetry between the left and right side of your face. You do that by applying a mix of bold colors and geometric shapes,” say founders Georgina Rowlands and Evie Price. “The project was inspired by the dazzle ships used in World War [1 and 2] where warships would be painted with bolds — kind of black and white geometric shapes to obscure them out at sea. So we have the same kind of idea: hiding in plain sight with this kind of old graphic aesthetic.”

And now, as the #BlackLivesMatter protests rage on, so have inquiries from curious protestors asking about effective ways to use CV Dazzle. “We have had a lot of people sharing CV Dazzle looks and looks for their Instagram, asking us whether we think it's a good idea,” the duo say.

Sadly the technology isn’t as effective as it once was. “CV Dazzle was developed in 2010 and it was developed using primitive technologies that are unlikely to work on the current 2020 facial recognition algorithms, especially during the COVID pandemic," they say. “A lot of developers have really improved their systems so that it can recognize people just from their eyes if they're wearing a mask."

Still, it’s not completely futile and does work against your phone cameras. “It will protect you against photographs taken at the protests by people,” say Rowlands and Price. “The only thing is we advise that you do it as a group and you're not just one person wearing CV Dazzle because it could make you a target on the street. You're going to stand out against the crowd; so just be careful in that respect.”

The duo also suggest using sunglasses with LED lights (if you have access), along with a face mask, which should offer an adequate (albeit not complete) amount of protection.

And if that’s not enough, there are other effective methods in the making. California-based makeup artist Kel Robinson, for instance, has been working to fight a “12 point recognition system” — something she describes as “the process of opening our iPhones with six points on each side of your face: chin, corner of mouth, cheekbone, ears, eye brow, and eye shape.”

Each of these twelve points can be used to identify someone, but without at least four points, a positive identification is impossible. “The problem is that even while wearing PPE, up to half of these points are still visible,” she says. “To thwart a positive identification, ALWAYS keep your ears covered and use colorful eyeshadows to draw up the shape of your eyebrows. Create as much facial-information you want over your eyebrows to obscure any identifying points.”

While these artists are tirelessly working to create advanced technologies that will counter newer surveillance tactics, the pace at which the A.I.-enabled tech is evolving is unprecedented. For these artists and activists, however, it is a fight worth fighting.

“Anti-surveillance makeup is a potent reminder of how our own bodies have been turned into government tracking beacons,” says Cahn. "They are symbolically powerful, but I’m skeptical that they are practically effective. It’s difficult, if not impossible, to develop a design that can counter every form of facial recognition. Moreover, in a free society, we shouldn’t have to forsake our identity to walk the streets untracked. Instead, the only real solution to facial recognition [is the passing of] state, local, and (one day) federal laws that ban it. Not regulate it. Not reform it. But completely and categorically ban law enforcement use of the facial recognition. Until that date, anti-face can provide symbolic protection, but it won’t give protesters the robust privacy safeguards they need.”

NEXT UP
Beauty
Halloween Cat Makeup Ideas, From Easy to Inspired
Beauty
Tumblr’s Coquette Aesthetic Is Taking Over Beauty — How To Get The Look
Beauty
The Most Viral TikTok Beauty Products of 2022
Beauty
It’s Official, Y2K Beauty Trends Still Rule The Runway