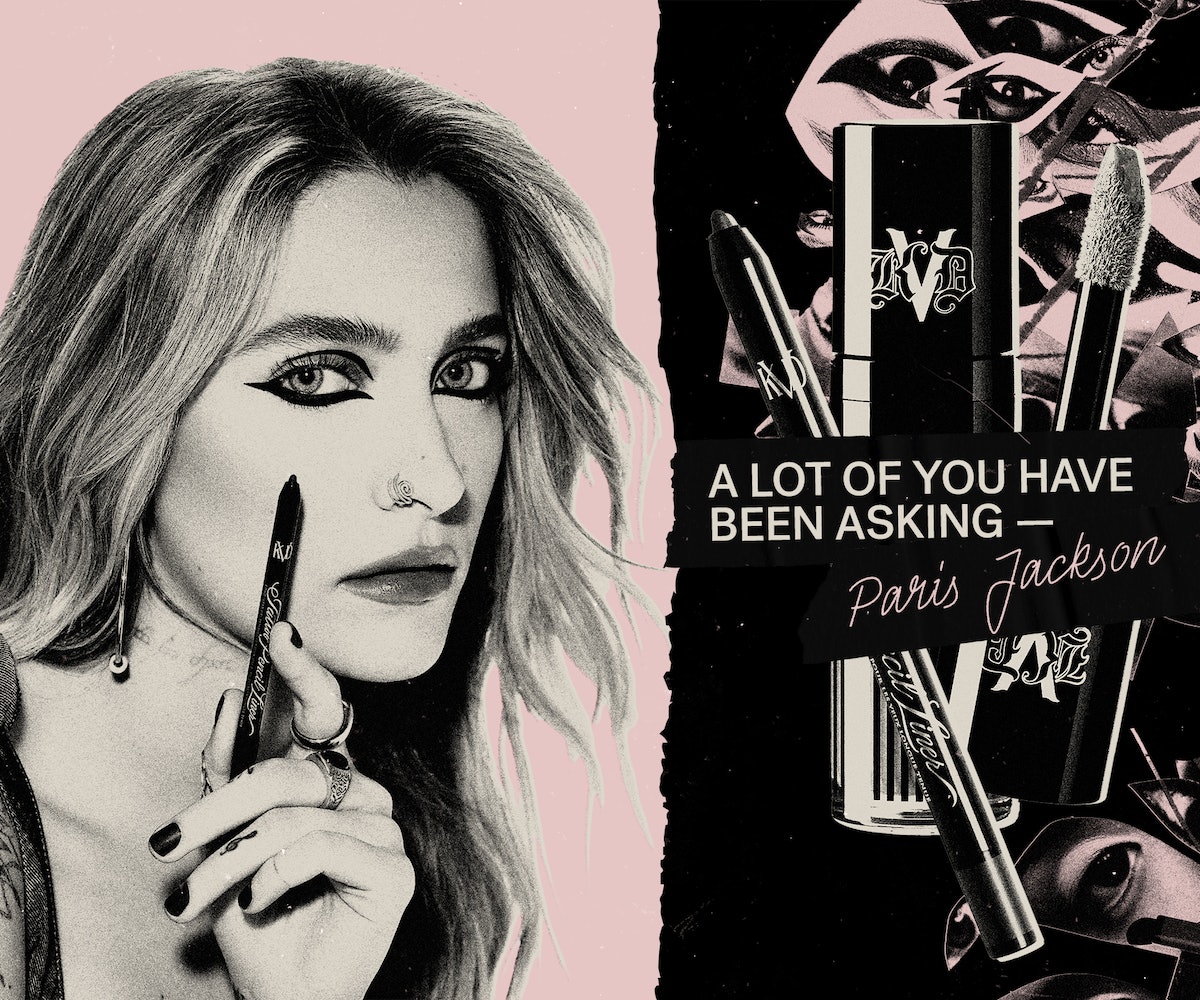 fb
tw
A Lot of You Have Been Asking

Wherever Paris Jackson goes, she makes a statement. Whether it’s hanging out at Fashion Week, touring her new music, and or attending the illustrious Vanity Fair Oscar After Party. she’s basically rock concert ready at all times, thanks to her defining look of messy blonde hair and heavy eyeliner.

So how fitting that her latest gig is working with KVD Beauty, the brand behind the car wreck-proof liquid eyeliner, as they set out to launch a brand new long-wear gel eyeliner formula (available on April 12)? About her new partnership, Jackson says it feels like a great fit for many reasons, but most evident is, “obviously, I'm covered in tattoos,” she says, “so that aesthetic is a perfect match.” It’s a time for newness for Jackson, who just turned 24 years old on April 3. She’s finding herself pushing out of her comfort zone when it comes to her fashions choices and her career: “I think I'm just evolving as a person, so I'm trying new things with everything,” she explains. “I'm trying a new sound for my music. I'm trying out for new roles that I normally wouldn't audition for...I'm kind of just exploring.” We can’t wait to see, and hear, what all comes next.

Below, Jackson talks to NYLON about her her new music, her favorite eyeliner tip, and working with KVD Beauty.

What is your earliest beauty memory?

I wasn't really allowed to wear like makeup in junior high, but my first memories were borrowing my friends' makeup at school and then like taking it off before I went home. I was always getting in trouble at school for what I was wearing and how I was doing my makeup, because I wore an excessive amount of eyeliner. I'd wear combat boots, which is a uniform violation. I was into all things grungy and punk from such a young age. I've kind of stuck with that since then.

How has your relationship with beauty changed as you've grown up?

I've just evolved in a sense. I don't think any of it matters unless you're a good person. If you're ugly on the inside, no amount of makeup can fix that.

As an artist, do you ever find yourself using makeup to express yourself?

I've been playing it safe the last few years and going for more natural looks and now I'm learning to have a lot more fun with it. When I went to the Givenchy show recently, I liked being able to look up different references and try things that normally I wouldn't wear day-to-day or on a carpet.

Is there a reason why you're more excited to have more fun with makeup now than before?

I think I'm just evolving as a person, so I'm trying new things with everything. I'm trying a new sound for my music. I'm trying out for new roles that I normally wouldn't audition for a few years ago with acting. I'm kind of just exploring. I find inspiration from everything, like love and pain and everything that goes down in between the two.

What made this feel like the right time to get into the beauty industry with your new partnership?

I think what's so perfect about working with KVD Beauty is it seems like our integrity and morals and the things that we appreciate all line up. When it comes to being environmentally friendly and cruelty free, celebrating artistry, diversity— it just lines up so well. Also, obviously I'm covered in tattoos, so that aesthetic is a perfect match.

How many tattoos do you have?

That is a good question. I have no idea.

When did you start getting tattoos?

Well, I was underage. I've always wanted them. Again, me with the uniform violations, I used to get in trouble all the time because I would be writing and drawing on my arms. So even at 13, I knew I wanted to be decked out in ink.

Is there a theme to your tattoos?

No, not even a little bit. It's all over the place and there's just a bunch of things that I love and appreciate that I feel have played a big part in me becoming who I am. But, there's also a bunch of silly, stupid ones that don't mean anything. They're all very special to me.

With you relationship to beauty constantly evolving, what makes you excited to try something new?

Everything. I mean, I get a little bit from cool music videos I've seen, or my friends and the makeup they wear. There's a lot of stuff that I've tried as a model that I normally would not usually wear, obviously, because it's couture. That's pushed me in a great way to explore new things and get comfortable outside of my comfort zone.

Is there a beauty tip you’ve picked up from a friend that you started using on your own?

One of my closest girlfriends and I had worn the cat eye for a long time. Then, she came over one day and I saw that instead of going up, the eyeliner was going down. She said it's called like, “the puppy eye”. And I thought, I kind of like that more than the cat eye. So, I’ve been doing that for a while now.

How are you liking the new KVD Beauty Tattoo Pencil Liner?

I have three favorite colors. I mainly wear the brown shades. Then when I'm on stage, I add Madder Red in there, too. I just think it looks cool. And unless you have a makeup wipe, that sh*t's not coming off. When the lights are like two inches from your face and you’re sweating bullets, that's super, super helpful.

Do you wear the same look on stage all the time?

Pretty much. I do a nice heavy eyeliner. Not too much on the face— I don't put too much concealer or foundation on my face. I just stick with the KVD Beauty ModCon Contour. That I wear every day, but I always turn it up in notch when I'm on stage. It takes me maybe 20 or 30 minutes to get ready. I don't do too much with my hair or anything, just throw some hairspray in there.

What’s your beauty routine like in your day-to-day life?

It’s just a little bit of top eyeliner, like a tiny wing. I like the the liner in the lighter brown, Axinite Brown, for that. Sometimes I'll draw freckles on and I put contour on, but that's mainly it.

Is there something you're really excited for people to hear in your new music?

I was in the studio with my hero, Andy Hull, and we were making this song called Adagio that was going to play in a very intense scene in a movie that Bella Thorne was in, called Habit. We knew that they were only going to use the first minute, so we were like okay, let's have fun with the second half. We ended up making the song six and a half minutes long, which is quite some time. The way the song was building, I felt like I should just try something. Then, the more I worked with him, the more I learned how to actually start yelling, not just project, but like screaming.

Do you feel there’s a relationship between being bolder in your look and your music?

It's all very synchronized. It all kind of just flows together.