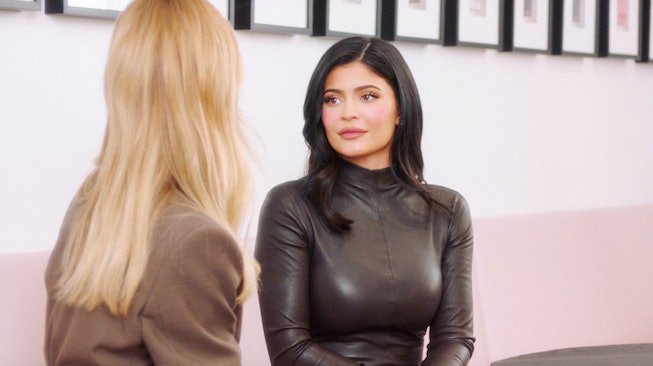 Thanks to the newest Quibi series, you can go behind the millennial pink packaging and lip kits that define some of today's top beauty brands. About Face, a series hosted and executive produced by Rosie Huntington-Whiteley, will spotlight some of the biggest names in beauty, including Emily Weiss of Glossier, Kylie Jenner of Kylie Cosmetics, and Huda Kattan of Huda Beauty.

Premiering on August 10, each episode of the series will focus on a different beauty icon or mogul. For this first season, Jenner, Weiss, Kattan are confirmed, along with Jen Atkin, PONY Syndrome, and Sir John. Described as being "beauty from the inside out," the series features Huntington-Whiteley engaging in in-depth seated conversations with her guests.

In the initial trailer, Kattan shares her secret to beauty success — "work your *ss off" — while Jenner discusses a fear of failure, and her makeup beginnings. Atkin also discussed how she got started, explaining that Ouai was initially constantly rejected by men that said she wasn't famous enough to have a brand.

For those new to the Quibi platform, the streaming service launched earlier this year, and features segments that run ten minutes or less. Made to watch on your phone, the service also features a number of other famous faces on its programming, including Dakota Fanning, Joe Jonas and Sophie Turner, along with Darren Criss.

Watch the first trailer for About Face, below.