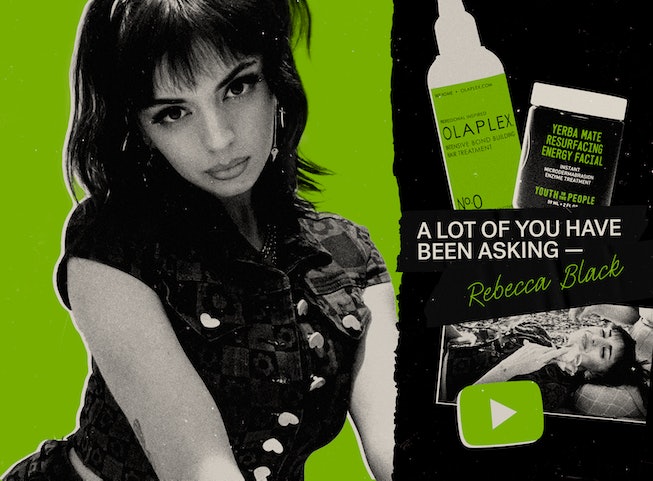 If you had internet access ten years ago, you likely know who Rebecca Black is, even if only as a deep core memory of the early World Wide Web. At the time, the now 23-year-old went viral for her infamous teen pop song "Friday" and its accompanying music video on YouTube. The reaction to the song — though notably iconic for a 13-year-old — introduced the young artist to some of the darkest parts and effects of living online. But like the rest of the world, Black has grown up, and she's ready to share again.

Following a reintroduction to social media at the start of 2020, the singer-songwriter has a new perspective on how she wants to be perceived, how she connects with her fans, and how she honors herself in not only her music but in her day-to-day. She's taking this new stage of her career as a chance to be vulnerable, and to be the artist she could've used back in 2011. She's been continuously vulnerable about her mental health on social media and came out publicly, releasing her first blatantly queer song, "Girlfriend," at the start of 2021. Simply put, she's not here to waste time.

"We have no idea how much time we have here," Black shared with NYLON over the phone. "I'm lucky enough to have the platform that I do, and to have this opportunity right now to re-introduce myself. Why not do it in like the way that I really, really, really want to, and in the way that it's the most honest, because it's so much easier to talk about."

Below, Black opens up about taking her agency back, controlling her own narrative, and making her new music as gay as she wants.

You grew up in front of the very early internet. How did that impact your relationship to beauty?

I was definitely a part of the generation that grew up as the beauty world, especially online, was building. Throughout that I was doing and what worked for me and what I felt really let me express myself. I think at first I was more focused on, how do I learn how any of this works? Because it was really something I learned on my own and not necessarily something that I had with my mom or anything like that, because she's quite a minimal person overall when it comes to beauty.

The other half of it was by having opportunities to work with makeup artists being so young. It's such a different world in that space, or at least it was ten years ago, where it was all about looking your best. There wasn't as much freedom to do what so many of us do now. So it's been interesting, but now, beauty and expressing myself through everything like my hair, and the way that I decide to portray myself, is always a very specific choice. Because I want it to explicitly reflect whatever I'm trying to express.

You reintroduced yourself in a pretty significant way last year, so when it comes to making specific choices about what you look like, how did you land on a look you felt representative of this new chapter?

I really have tried to ask myself what makes me wake up in the morning and look at myself and go like, "Oh yeah, that's Rebecca." To me, and not necessarily to anybody else. I think that has been a challenge over the years because it's so easy to get caught up in... Well, this is what people think that Rebecca Black should look like, or this is what I think that a young girl doing music looks like. Or I guess a girl in her twenties, or whatever it is. I've tried to let go of all of that and just ask myself, what do I really want to do?

And so, for example, when I decided to dye my hair blue, that could have been something that was discussed through teams and people, and almost felt like it had to go through approval. But it was something that I explicitly told nobody [about]. I wanted to do it myself and it's become one of my favorite things about myself. Funnily enough, I'm about to change up the blue. But now I just really have taken a lot of creative control over not only my music and my visuals and all of that, but really just the way that I get up and make myself feel like me is the most important thing.

When it comes to beauty, what are your go-to's?

I definitely have found that putting myself through my routine — even though majority of the time, I'm the only person that sees me — is really important for just remembering who I am. Because while makeup isn't everything, it's a really important part of the way that I love to express myself. I find a lot of joy in that itself and obviously with my hair and everything. I'm really into skincare, too. I love anything that's by Youth to the People. I think that they're a God-sent brand. For my hair, I get it done by Greg Lennon Jr. [using Good Dye Young and Olaplex]. He does my hair for every project and he is a wizard. There's nothing he can't do.

At the same time last year, you were — and continue to be — really candid about your mental health and sexuality. Why did that feel important for you to share with your fans?

I think the timing there was more coincidental. Because this has all been happening in my life at the same time and happening in a time where I'm becoming a lot more comfortable with who I am, and with letting myself be less afraid to try things out or take what some would either call a risk or some would call just living your life.

Last year forced everyone to really sit with themselves. Do you think that time helped you think through and navigate this next stage?

It's so funny how, when you take out the peanut gallery of thoughts that don't necessarily matter as much as your own. Especially things about the way you want to look and express yourself. It's so much easier to become so much more comfortable with yourself. I think that is the most important thing to me. So, especially in that first moment where everything shut down and we were all spending so much time on our own. I still am now, but I definitely feel a difference in just the way that I feel about myself. And I think in a way for the better.

Have your past experiences with social media, and the peanut gallery as you mention, changed the way you use it today?

It definitely has changed. I think, generally, social media and the way that we all view something like Instagram or TikTok or whatever the platform is, has changed a lot. I am so happy to see the overall shift of people being drawn, not necessarily to what is the most crafted, perfect, idealistic looking thing, and being so much more open to being relatable. You see so many more conversations about transparency and honesty and showing what your life really looks like, because I definitely have over the years, felt really overwhelmed by this pressure to portray myself as something that I think people want to see.

That definitely comes from my experience with "Friday" and being so young and having had so many stark opinions about me for a long time. But now, it's a process. I spend so much time on social media, I think there's so many amazing parts about it. It's not perfect at all by any means, but I try to put things in front of me and only follow people and things that really make me feel good and not make me feel less-than. I hope that's an overall trend for everyone.

Let's talk music! I know you have a bigger project in the works, but you recently released "Girlfriend," your first obviously queer song.

I love the song because it's straight into the point, basically. I really wanted to make a statement and be like, so this is where we're at now. This is what to expect. Thematically, I wanted to feel really free to create something as gay as I wanted, because I know that's something that I really love and is important to a lot of other people in my audience. And to do it in a way that you can celebrate this queer experience, and do it in a way that's just as fun as all of these other huge, beautiful, crazy, booming pop songs have, it just felt like the perfect... Not only re-introduction, I guess for myself, but just introduction to all this new stuff.

What did that release feel like after sitting on it throughout quarantine?