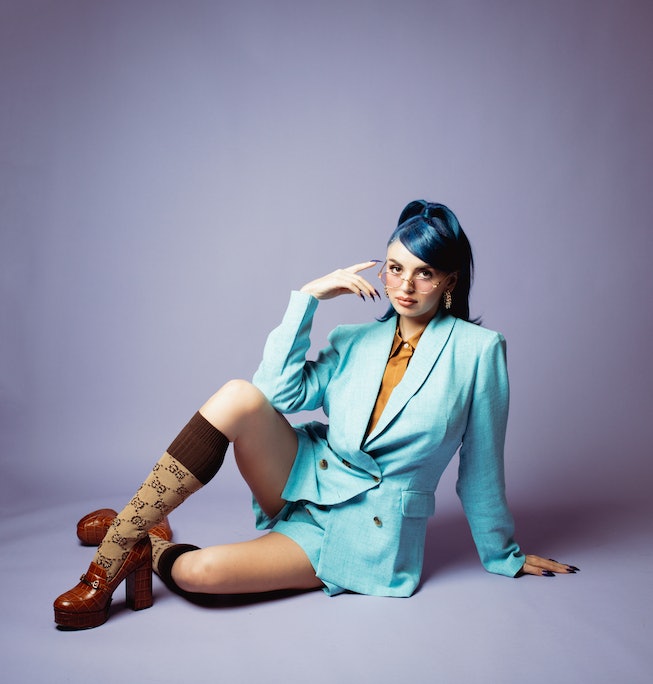 Do you hear that? It's the sound of our collective bones creaking as this Wednesday marks ten whole years since YouTube musical sensation Rebecca Black released her career-defining anthem, "Friday." Yes, ten years. Though it feels like it was just yesterday we were all wondering which seat in the car we should take, Black has since turned 23, come out as queer, and released a bunch of other music not about a day of the week. She's grown up, as we all have.

Now, Black has also done us all the great favor of reimagining what "Friday" might've sounded like if she released it today, sharing a brand new remix for its tenth birthday. The new version features Dorian Electra, Big Freedia, and early-Aughts throwback 3OH!3, and it's been revamped in the genre that's all the rage today: hyperpop. With boppy, glitched-out production by 100 gecs' Dylan Brady, the upbeat track opens with Big Freedia bellowing out the commencement of the weekend before an animatronic-version of Black chimes in with the lyrics that have haunted us since 2011: "Seven a.m. waking up in the morning..."

The song's new music video — which finds Black going through the song's same morning routine but now as a punked-out e-queen — is equal parts disorienting and great. Dare we say... it aged well? At the very least it makes for great un-ironic, ironic music.

Last year on February 10, nine years after the song dropped on YouTube, Black recounted the bullying and backlash she received when she first released the song.

"Above all things, I just wish I could go back and talk to my 13-year-old self who was terribly ashamed of herself and afraid of the world," Black wrote in a statement. "To my 15-year-old self who felt like she had nobody to talk to about the depression she faced. To my 17-year-old self who would get to school only to get food thrown at her and her friends. To my 19-year-old self who had almost every producer/songwriter tell me they'd never work with me [...] You are not defined by any one choice or thing. time heals and nothing is finite. it's a process that's never too late to begin."

Its safe to say that "Friday" now lives on as a much-beloved relic of a simpler time in internet history. Hear its new remix above, and check out a specially curated hyperpop playlist by Black on Spotify.