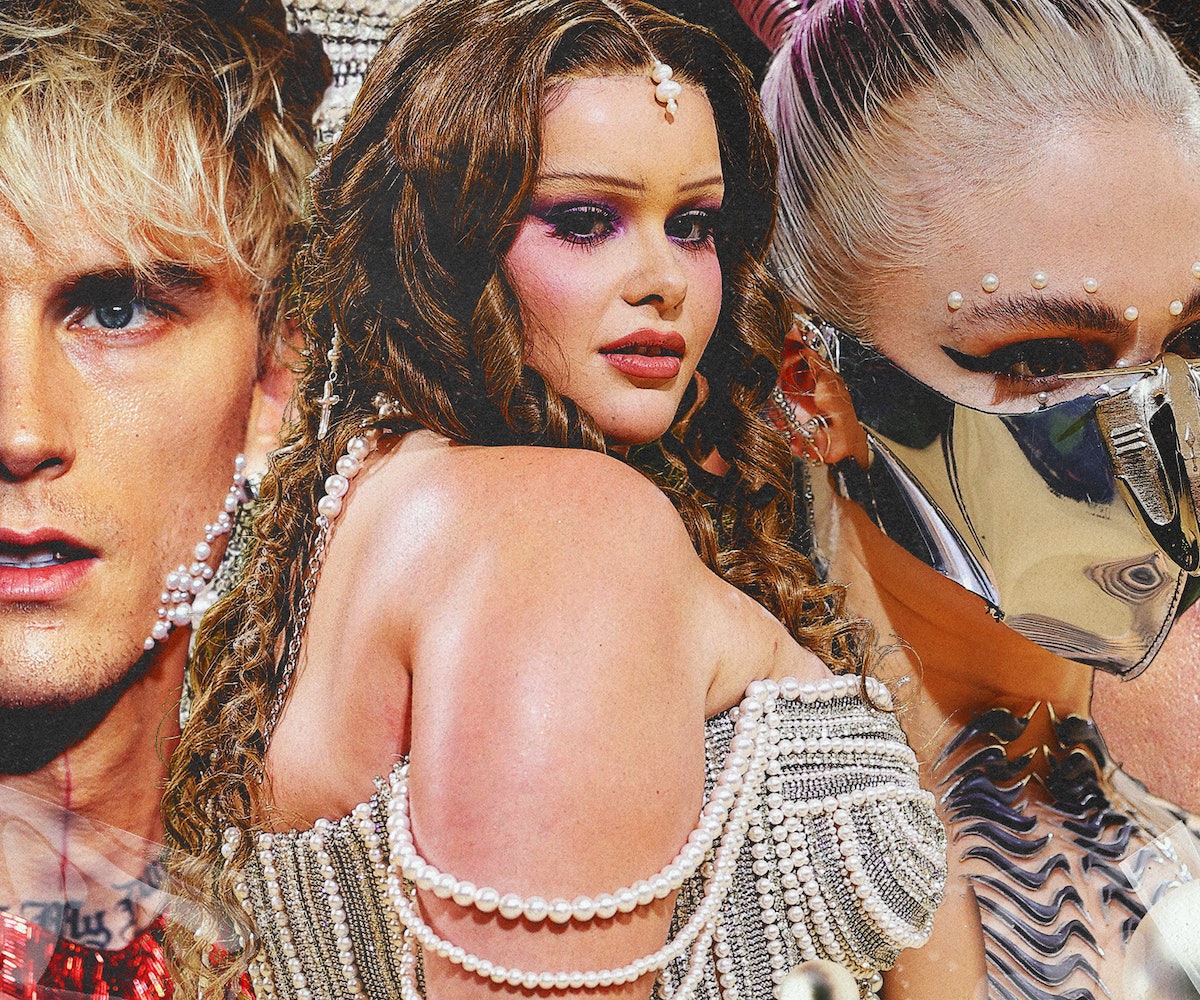 Pearls have always symbolized glamour and luxury, tracing back to their history as gifts for Chinese royalty as early as 2300 BC. Strands of pearls call to mind iconic images of Coco Chanel in her atelier and Audrey Hepburn enjoying her breakfast outside of the Tiffany’s store window. In the ’80s and ’90s, pearls seemed to be associated most closely with sweater sets and a collegiate lifestyle. So while pearls have different moments in the public consciousness, they have been long used as a signifier of wealth and social standing. Now, that is getting turned on its ear. Modern-day pearls have returned for a more playful and contemporary comeback.

In the last couple of years, pearl accessories have been reworked and rebranded, separating them from the ones in your grandmother’s jewelry box. Jewelry designers like Beepy Bella and Jiwinaia repackaged pearls for Gen Z, mixing them with colorful beads and even hand-painting them until they were inevitably novel and trending again.

While the comeback has largely propelled by jewelry, pearls have been slowly making an appearance in the beauty space, alongside the rise of stick-on face gems (thanks, Euphoria!). Ever since Alexa Demie’s character wore a floating pearl eyeliner look, the internet has been in a frenzy to recreate the stick-on pearl look. Now the beauty crossover is officially here. After making a mark on some of the biggest fashion events of the year from the MTV VMAs to the Met Gala, pearl designs in makeup (and even hair) have made the gem fall’s biggest beauty accessory.

At the 2021 MTV VMAs, Machine Gun Kelly broke the internet with girlfriend Megan Fox and their coordinated out-of-the sea ensembles. As an add-on to his very red and very sequined outfit he has a partially bedazzled face. Pearls in a range of sizes stuck onto his face, contouring the sides of his jawline, nose, and sideburns was essentially the rapper's first-ever makeup look.

The anxiously-awaited Met Gala delivered more surprising beauty moments, including Barbie Ferreira’s pearl dress. Since the countless number of pearls on her dress weren’t enough, the Euphoria star opted for a custom Mudd Pearl hairpiece that hung over her parting to the front of her face and wrapped all the way around to the back of her updo, with strings of pearls and across at her back.

“A pearl headpiece is such an old Hollywood classic, but for someone like Barbie who is so genuinely cool, I wanted to mess it up a bit—with some corroded pearls and DIY metalsmithing,” said Yasmin Moon, co-founder of Mudd Pearl, on the piece.

Grimes also delivered pearl face charms for her Met Gala look, hovering over and accentuating her extraterrestrial-looking eyebrows. She also had graduated pearls lining her ear, taking the traditional pearl earring idea and giving it a futuristic spin (the metal face mask also helps in that regard).

There was also SZA’s recent photo dump with the largest most chaotic pearl manicure we’ve ever seen. Her nail artist revealed that the manicure took over five hours and “many prayers”.

So there you have it, we officially all have red-carpet approval to get creative with pearls as a beauty accessory. As you look to add more pearls into your routine, and as stick-on pearls continue to sell out on Amazon, remember you can always wrap a classic pearl necklace through your hair, like Barbie. Get creative, with this trend the world is (quite literally) your oyster.

Check out even more pearl beauty inspiration, below.

NEXT UP
Beauty
The Best Beauty Looks From The 2023 Grammy Awards
Beauty
Charli D’Amelio and Landon Barker Wore His & Hers Goth Manis To The Grammys
Beauty
Dua Lipa’s ’90s Updo Is Hair Inspo For Your Next Night Out
Beauty
Megan Fox Is Completely Transformed By A New Blonde Bob
Style + Culture, delivered straight to your inbox.