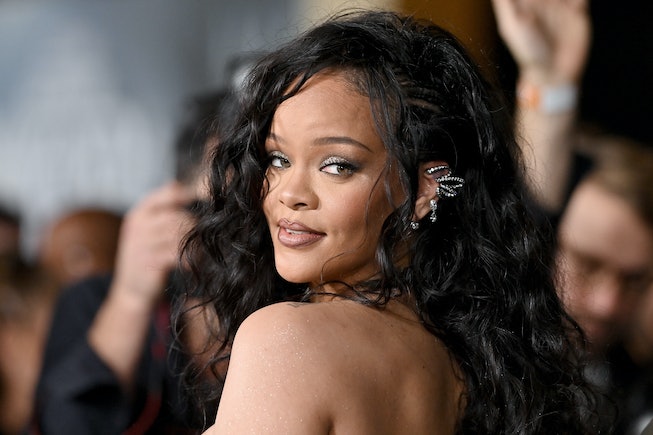 At last night’s Golden Globe Awards, Rihanna and ASAP Rocky skipped the red carpet and instead went straight into the Beverly Hilton for the start of the ceremony. Rihanna was nominated for Best Original Song for “Lift Me Up” from Black Panther: Wakanda Forever and despite missing the main photo moment of the night, her look will still go down in Golden Globes fashion history. Rihanna wore a custom black velvet Schiaparelli gown and her hair, styled by her longtime hairstylist Yusef Williams and Naphia White, was inspired by the volume of the dress itself and her I-woke-up-like-this pigtails. The result was something that Williams says Rihanna called “Princess-Leia-Meets-Hollywood-Meets-Wakanda”.

The gelled-back style features four long, twisted futuristic braids (very Star Wars) and a Hollywood face-framing curl. Williams used wires to add structure to the braids, before layering silky twisted lengths on top of the plaits, according to Vogue. “At first she was like, ‘Okay, I don’t wanna look like Princess Leia,’ but in the end, we were like, ‘but what’s wrong with Princess Leia; she was fucking fierce,’” Williams told Vogue. Williams posted the final result on Instagram, with the caption: “Another fun day at work with the Fam!!! @badgalriri you just Get It. @naphiisbeautifulhair we always make fetch Happen no Matter what!!! love you for always Holding it DOWN!!! My true partner in crime.”

Rihanna’s take on Princess Leia is already inspiring people to call it “the hair of the moment”. “If #Rihanna wears Princess Leia-esque hair, then by all means… that is THE hair of the moment! I love it,” Tweeted one fan. Her Golden Globes makeup, by Fenty Beauty Global Makeup Artist Priscilla Ono, was barely-there, rosy, and fresh. “We wanted to create a clean, refreshed beauty look using all rose gold hues as a soft juxtaposition to the dramatic structure of her gown. We kept the eye minimal and mixed different rose gold tones on her lips, cheeks and body for an all-over sheen,” says Ono.

Ono also shared the products behind the all-Fenty-Beauty look, which included Fenty Beauty Pro Filt’r Soft Matte Longwear Liquid Foundation in 330, Fenty Beauty Cheeks Out Freestyle Cream Blush in Strawberry Drip, Fenty Beauty Killawatt Freestyle Highlighter in Ginger Binge/Moscow Mule, and Fenty Beauty Gloss Bomb Universal Lip Luminizer in Fu$$y. While you can definitely recreate Rihanna’s Golden Globes makeup at home, your own take on Princess Leia may take longer to play around with. Just take a leaf out of RiRi’s book and start with your morning pigtails. The results might be as spaceship-chic as hers was.

NEXT UP
Beauty
The Best Beauty Looks From The 2023 Grammy Awards
Beauty
Charli D’Amelio and Landon Barker Wore His & Hers Goth Manis To The Grammys
Beauty
Dua Lipa’s ’90s Updo Is Hair Inspo For Your Next Night Out
Beauty
Megan Fox Is Completely Transformed By A New Blonde Bob
Style + Culture, delivered straight to your inbox.