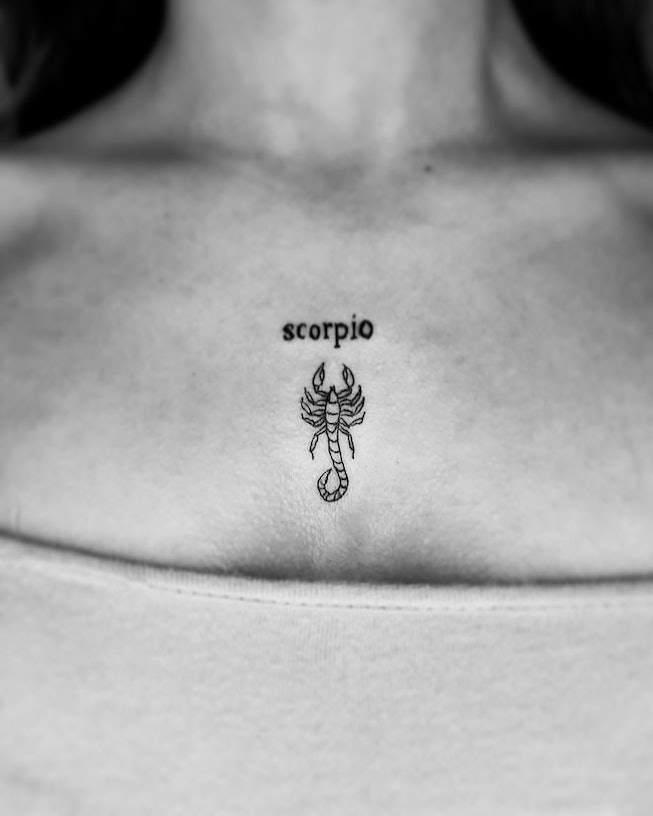 As we get deeper and deeper into the autumn season, we also stumble upon one of the most discussed, most controversial, (and let’s face it) most meme-able astrological signs: Scorpio. While every zodiac sign comes with their own unique traits, both good and bad, Scorpio always remains at the top of the list of signs that stir contentious opinions. Scorpios exude such power and intensity it makes them a sign people love to hate and hate to love. But, if you are a Scorpio or have a Scorpio in your life you know exactly how loyal and determined they can be, making them valuable and supportive they are to their inner circle. So when it comes to getting a tattoo you can also expect their choices to be pretty bad ass.

Not only are Scorpios loyal to the people they love, but they’re even more true to themselves. Those who identify strongly with the water sign identify wear it as a badge of honor. They are known for being brave and stubborn at times, and might be interested in the tough-looking tattoos to go with the attitude. Luckily, there are plenty of ways to honor the Pluto-ruled sign in ink. As small, but poisonous predators, scorpions are pretty cool animals that embody the traits of the sign, but if you’re not in love with the idea of having an arachnid live permanently on your body, there are a ton of other Scorpio-inspired tattoos to think about.

From bold zodiac symbols to geranium flowers to the very intriguing goddess of the sign, find the inspiration for your next tattoo. Below, we’ve gathered 21 tattoo ideas for Scorpios

The astrology symbol for Scorpio is truly unmistakable. Its notable shape means that you can put own personal spin on it without losing the design. You can use your favorite font or try swapping the arrow for a more meaningful symbol like a heart, whatever you want.

It’s not widely known that geraniums are the flower of Scorpios, but it makes perfect sense to think about. The crimson red flower speaks to the deep and passionate side of the romantic sign.

This is an obvious choice because nothing says “I’m a Scorpio” quite like its namesake scorpion. The hard-shelled creature can be seen as a metaphor for your tough exterior, but depending on how your artist draws it, your little scorpion can be intimidating or sweet.

The Scorpio constellation is such a fun tattoo choice because of its playful curvature. You can feel the essence of the scorpion without the full depiction.

Scorpio goddess, Kali, is the goddess of destruction which corresponds to some of the deeper, darker impulses of Scorpios. This is a more intense kind of tattoo, but that might be exactly what you’re looking for.

Although scorpions are obviously the animal most closely associated with Scorpios, snakes and eagles have also found their way into Scorpio cannon. These tough and in control animals carry some of the same prominent traits that speak to a true Scorpio. Eagles and snakes exude protectiveness and cunning, respectively.

NEXT UP
Beauty
10 Sagittarius-Inspired Nail Art Ideas For the Headstrong Season
Astrology
Your Natal Saturn Placement In Astrology, Explained
Astrology
Your December 2022 Horoscope Fuels The Reboot
Ask A Witch
Ask A Witch: How To Survive The Holidays With Hoodoo Magic