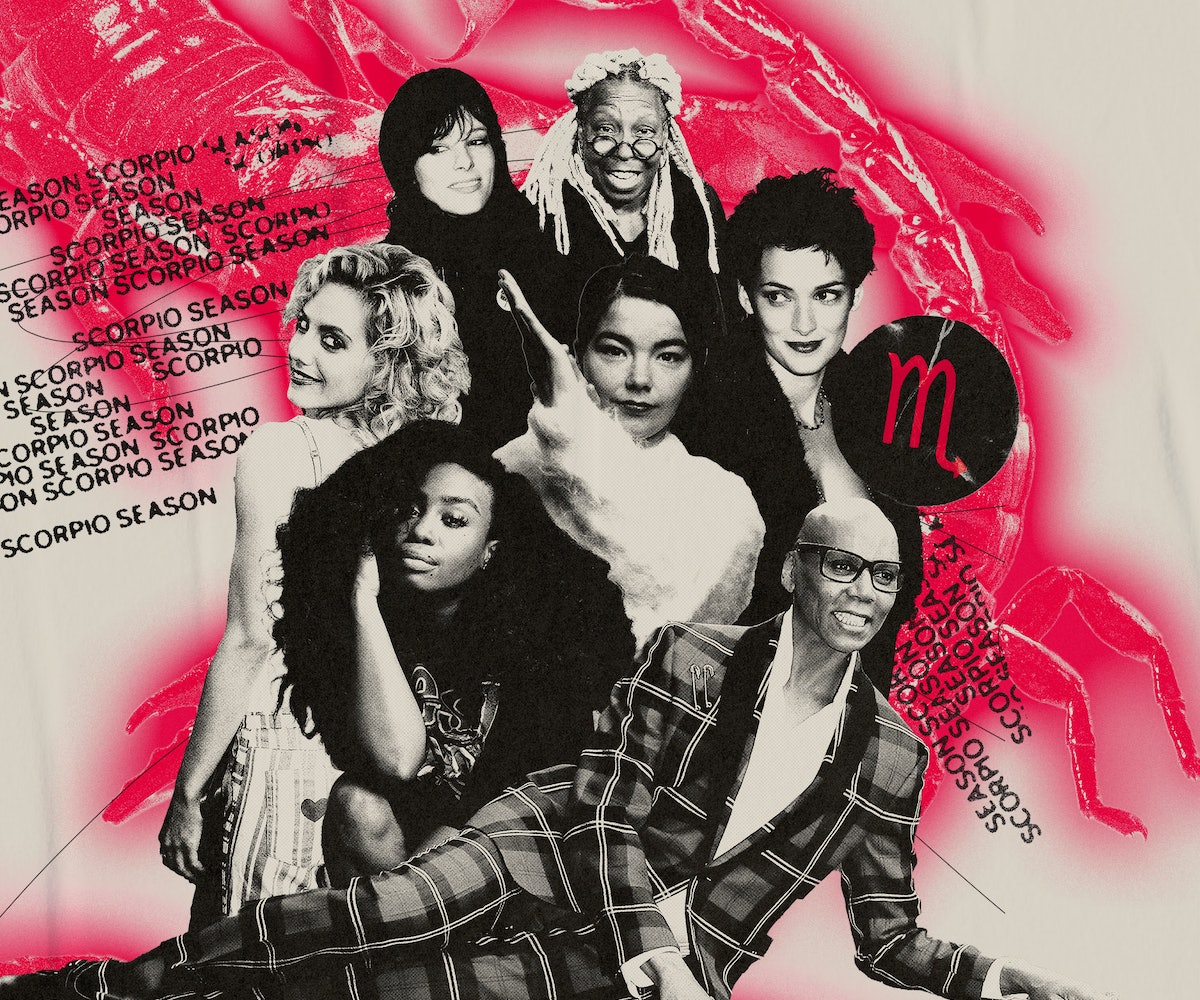 If Libra gets its way (and that’s a big if), then all the social climbing will have paid off: You’ll have secured the bag, the man, and the toppers on the wedding cake. But even if you make it to paradise, acting out your Adam and Eve fantasy of a happy ending, the serpent is bound to slither down the tree. If we’re to share this world with another, who exactly has the power? And how much of the Eden we’ve been promised — by our parents, our culture, and our gaslighters — has been a lie? The truth, whether you like it or not, may ruin you, wreck you, or liberate you, but no matter its outcome, you can count on a Scorpio to deliver it.

With the six rungs of personal evolution complete (Aries through Virgo), Libra introduced us to the second half of the zodiac, the relational domain, which promises influence and exposure to the rest of the human race. Before Sagittarius can fling us out into the world and Capricorn can enthrone us, Scorpio must make us into adults. Childhood ends here, in the sign of sex and death, as profound experiences reveal the truth of life to us.

Scorpio is ruled by Pluto, king of the underworld, the repository where our shame, shadows, and discarded selves lie in ruin. Beyond the veneer of socialization and stability, Pluto gives a home to the grief you can’t release, the loves you can’t shake, and the violations that have defined you forever. Down here, you can be a monster, a demon, a Slayer, or whatever life has made of you. On a constant roundtrip between the surface and the demimonde, Scorpio dredges up secrets and lies, and with them, buried treasure that could change the world. “What is the point if we don’t expose what needs to be exposed?” Thandiwe Newton said, when talking about her experiences of sexual abuse in Hollywood.

“The bleak, brutal truth is always on Scorpio’s mind, making uncomfortable the people who abuse sex, fear death, and deny their own mortality,” as Alan Oken describes them. That truth-telling spirit ensures the sign’s notoriety, as immortalized by its rogues gallery of confrontational, iconic women comedians: Whoopi Goldberg, Fran Lebowitz, Kathy Griffin, and Marcia Belsky. The major Scorpio players threaten the system because of what they dredge up with them from the depths. Björk, introducing the house and alternative sensibilities to the pop mainstream; Terence McKenna, awakening suburbia to psychedelics; and Larry Flynt, exposing the bourgeois contradictions in America’s relationship with porn, profanity, and free speech. Scorpios may not always be altruistic or even particularly intelligent, but they’re always tapped into the big picture. Pluto promises destruction, and in its wake a new reality, and its harbingers can be counted on to herald change. Caitlyn Jenner has, one way or another, forever shifted the conversation on trans identity. And who could have known, in 2013, that Jenny McCarthy’s stand against vaccines would portend our new world order?

“Scorpio’s drive for power, then, may be rooted in self-preservation. For all the ways Scorpios are said to control and corrupt, they are often the ones left behind, rendered enervated and exhausted, the discarded batteries of someone else’s regeneration. It’s only natural that they never want to let go.”

But as the ultimate agent of change, Scorpio’s impact is no less profound on the interpersonal level as on the global stage. Its home is the eighth house, the part of our chart concerned with death, inheritance, wills, and contracts, where our role must be redefined in relation to the people in our lives. When a parent dies, are you still a child? When you merge lives with another, what remains of your single self? Beyond family and lovers, the eighth is the home of doulas and therapists, those who intervene just as we are entering this world or crossing into the next, meant to set us off on our Sagittarian journey of psychedelic self-discovery.

But if you’re moving forward, that doesn’t mean Scorpio is ready to let you go. Love and death are one in their eyes, and if they’ve chosen you, you better plan on sharing a sarcophagus. When we are on the precipice of our power, Scorpio either helps us to realize it or hoards it for itself. “No one can be fully aware of another human being unless we love them,” Hannibal Lecter, as played by the Scorpio Mads Mikkelsen, tells his favorite, Will Graham, on his eponymous TV series. “By that love we see potential in our beloved. Through that love, we allow our beloved to see their potential. Expressing that love, our beloved’s potential comes true.” That Scorpio love may have been the one that led you to your first AA meeting or got you to write your novel. But just as often, it’s the wrong turn at Castle Dracula, the point when Lestat drinks your blood, paralyzes your growth, and steals your future forever.

Scorpio’s drive for power, then, may be rooted in self-preservation. For all the ways Scorpios are said to control and corrupt, they are often the ones left behind, rendered enervated and exhausted, the discarded batteries of someone else’s regeneration. It’s only natural that they never want to let go. And if you do move on, they will always represent the skin you’ve shed, and the old life you’ve long ago buried. Perhaps Scorpio’s stigma comes from what they reveal about ourselves, or, more bitingly, who we used to be. Once upon a time, you believed Hillary Clinton was the future, that RuPaul was a rebel, and that triple-Scorpio Ryan Murphy’s Glee was cutting edge. At first, those Scorpios brought an underworld to the surface, but inevitably, the fringe morphed into the mainstream, and they became the new operators of the matrix. Like the French revolutionaries coming for their Scorpio queen Marie Antoinette, we want to erase the proof of our own naïveté, and of the power we once ascribed to another. As we ascend to a more highbrow sensibility, we leave them beneath us in a new underworld, inevitably empowering them to rise from the past, more dangerous than ever. Or didn’t you see Roseanne Barr coming?

We love a makeover montage, as immortalized by the Scorpio movie star pantheon — Julia Roberts in Pretty Woman, Toni Collette in Muriel’s Wedding, and Brittany Murphy in Clueless. But once their images have been frozen in the public consciousness forever, like dragonflies in amber, do we allow these women to embrace the evolution their sign calls for? The only way out of the matrix, then, is through the embrace of annihilation. Sacrifice your old life to ensure your liberation. When her rom-com image soured with the public, Meg Ryan walked away from the industry. Lisa Bonet lost her role on The Cosby Show because she wouldn’t adhere to its star and creator’s so-called family friendly ideals. “I don’t need to say, ‘I told you so,’” she said, of the recent revelations around Bill Cosby. “I just leave all that to karma.”

The fire promises pain and the scorching of everything you once knew. What’s on the other side of this life is Scorpio’s main mystery, a new being of which you cannot conceive. “If you strike me down, I will become more powerful than you can possibly imagine,” Obi-Wan Kenobi reminds Darth Vader, before his death. By embracing your own transformation, you make yourself an engine for the world’s own awakening, a reverberator of infinite new futures. It’s likely that Colin Kaepernick may never play professional football again, a sacrifice that for him may always sting. But could anyone say that the sacrifice wasn’t worth it? When your old life is ash and cinder, what emerges in the smoke? What are you afraid of becoming?