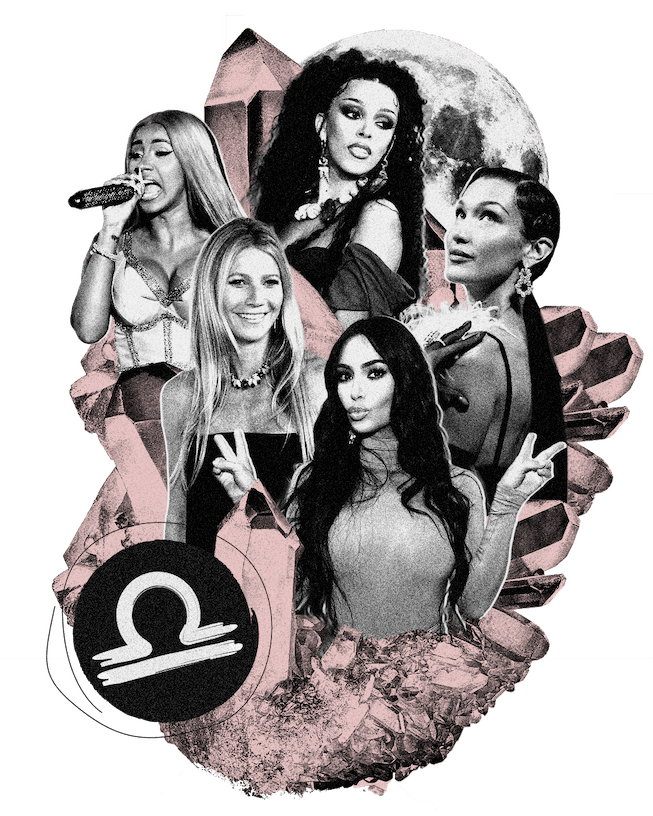 In 1998, Cate Blanchett snatched instant immortality playing the supreme Virgo Elizabeth I in Elizabeth. But come Oscar night, a different contender would steal Blanchett’s prize, one who knew that the film industry, like any scene, was a game to be rigged. Did Gwyneth Paltrow deserve to win an Academy Award for her role in Shakespeare in Love? Perhaps not. Did she look fabulous doing it? Absolutely. Sound like any Libras you know?

If the Virgos had their way, we’d all be cloistered in the tallest tower like Snow White, withering in private perfection, fearing exposure to a cruel world. But we can’t all be Michael Jackson, stagnating on Neverland Ranch. The first six signs — Aries through Virgo — represent the self. But to make it through Scorpio’s psychosexual mind games all the way through the Piscean cult collective, you’ll need some social graces. Libra reminds us that we need people — be they our lovers, our meal tickets, or someone to push down the stairs on our way up.

The social climb is Libra’s driving imperative; Alan Oken writes that early Greek and Arabian astrologers referred to the seventh sign as “the claws of the Scorpion.” Leo and Virgo awakened our inner talents; now it’s up to Libra to align our outside circumstances with the inner vision. Ruled by Venus, the goddess of beauty and artistry, Libra demands to be received like Cinderella at the ball — or like Marion Cotillard winning an Academy Award. Virgo is driven by a perfection of the self within, which Libra manifests in the external: the house, the husband, the trophies.

Cardi B worked her way up from the stripclub. Doja Cat slept on her bedroom floor, cutting songs together after dropping out of high school. Halsey snatched superstardom after living in homeless shelters. “So high the climb,” belts the Libra Gwen Stefani, “I can’t turn back now.” Libras fix their gaze on the very top of the scales, above the fluctuating weights below; their claim is objective perfection, the top of Mount Olympus, the freshest fruit in the Garden of Eden. Often defining the American success story, Libras hold fast to what others describe as a fantasy, and ride it until they’ve attained it.

And with the rise, comes the backlash. Libras reflect what others want to see in themselves...and the mirror has two faces. When a Libra leaves the sticks for the big city, battling their way up to achieve their dreams, we cheer for them. But when they reflect the ruthless materialism and individuality involved in such an ascent, we bray in revulsion. Escaping the clutches of Harvey Weinstein and the film industry, Paltrow remade herself as the emissary of wellness, bringing GOOP to a value of over $250 million. Stefani traded her ska rebel aesthetic and unfaithful husband for a seat at Blake Shelton’s throne in Trump’s America. Unabashed, unashamed, and unwilling to shrink their successes to more palatable, wholesome terms, Libras flaunt what they have. You can hate them, but you can’t say they’ve been disingenuous. You paid for this, didn’t you? Come for Susan Sarandon if you want to, but do you really think you can go a thousand rounds with Thelma?

That grit to strive has armed Alexandria Ocasio-Cortez with iron cojones, ensuring survival amid a circus of corruption and cancellation. And it’s what ensured Oscar Wilde his dignity, after his public presence, once acclaimed, led to imprisonment for so-called indecency. Libras know, intimately, that public approval can flip on a dime. Like its fellow air signs Gemini and Aquarius, Libra has little interest in bourgeois moralism or sentimentality. Why compromise when objective perfection is at hand? “Man is something that shall be overcome,” Friedrich Nietzche wrote, in his contemplations of the coming übermensch, or Superman. “Become who you are!”

For Libras, the highest self is something to be seen to be believed, indicating a lifetime of self-definition in the eye of the beholder. Among Libra’s catalogue are some of the great beauties, including: Brigitte Bardot, Ciara, A$AP Rocky, Viggo Mortensen, and Rosalia. The supermodel Bella Hadid, meanwhile, has fulfilled Nietzche’s heroic labor, and made herself into something superhuman. But perfection, once attained, must be appreciated. True love promises not just a cinematic reward for all Libra’s efforts, but a chance to see themselves reflected back as they truly are. Libra needs to feel loved unconditionally and consistently at any stage of their lifelong ascent, making the search for a lifelong soulmate critical. John Lennon, a Libra who had attained a celebrity verging on godhood, found in Yoko Ono a fellow air sign who could reflect his mirror image without distortion.

Though Libras may claw their way over anyone to reach paradise, that doesn’t mean they want to be alone in Eden. Motivated by the possibility of an ideal world, Libras imagine a just one, where everyone can share in what they’ve attained. Against any expectations, Kardashian persuaded President Trump — a fellow air sign — to grant clemency to Alice Marie Johnson and Cyntoia Brown, two women who were wrongfully penalized, playing a critical role in the passage of the First Step prison reform act. Hadid advocates for Palestinian rights and smiles through any retribution sent her way. And while the rest of us had largely dissociated by the time of the 2019 government shutdown, a Libra like Cardi B wasn’t having it. “I feel really bad for these people that gotta go to f*cking work to not get motherf*cking paid.” By the end of the year, she’d be known as “one of Bernie’s most powerful allies.” In a world of false platitudes and disposable sentiments, it may take a ruthless objectivity — or a naive positivity — to enact change.

This fixation on a perfect world can inspire a reconfiguring of justice for all, but, without compromise, a Libra’s rigid vision can yield to vast abuses of power: Heinrich Himmler, a chief architect of the Holocaust, took Nietzche’s ideas too far in his fantasy of a master race. Margaret Thatcher — and Putin after her — were willing to sacrifice too much for the possibility of remaking their nations in their image. The Hollywood system, a steroidal conveyer belt of impossible standards, has been warped by a Libran ideal from the start; no wonder that Carrie Fisher, a Libra born to golden age A-listers, would define her wit in contrast to the rampant delusion of the industry. In opening up about her plights, Fisher acted as a force of balance to Tinseltown’s sterilized veneer.

Those with Libra placements fear their inherent duality: Will they be a cold hardass like their sister, Judge Judy, unswayed by base emotions, bound to their non-negotiables? Or do they overcompensate, leaping from the top into the arms of someone far beneath them? Under the weight of a false pedestal, built for another, the scales become a see-saw, hurling me above or below you, but never at your level. One lover asks: “Where do you want to eat tonight?” Fearing conflict, or the truth of who’s really running the show, the Libra responds, meekly: “Wherever you want.” Only through Scorpio’s outright embrace of power — in all its honest savagery — can an equitable relationship be realized.

And yet. No matter if it results in self-abnegation, fantastical delusion, or manipulation, the love of another is Libra’s purest currency. In the end, we’re all we’ve got. The three greatest stars of James Cameron’s oeuvre are played by Libras: Sigourney Weaver, as Ripley in Aliens; Linda Hamilton, as Sarah Connor in Terminator 2; and Kate Winslet, as Rose in Titanic. In her first showdown with the Terminator, Sarah Connor’s own life was at stake. But when a cyborg assassin shows up for her son? Watch out for the shotgun, and the apotheosis of Final Girl to warrior legend. People can worship you or terminate you, act as pawns in your ascent or gatekeepers along the way. But Libras have the cold wisdom to know: when a real one comes along, you’ve found a life raft that will save you until the very moment you have to let go.

This article was originally published on Sep. 17, 2021