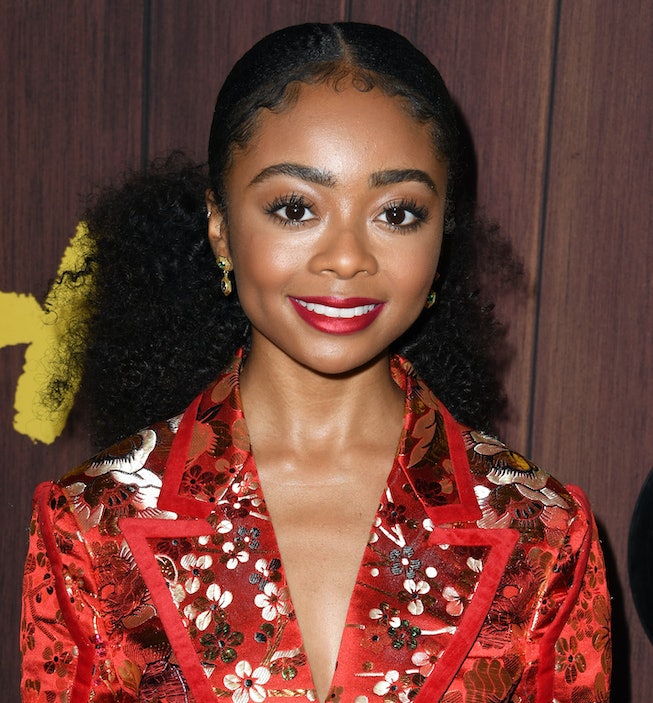 For those days when you don't have a spare moment to spend on what you put on your face, Skai Jackson has arrived, sharing a 10-minute natural makeup routine. Unlike the glamour that's so often required of her red carpet appearances or a starring role in the latest video from Lil Nas X, Jackson's daily look is easy to achieve, and features the use of many Black-owned beauty brands.

For the tutorial, Jackson begins with a wet BeautyBlender that she dabs with Pat McGrath foundation. She shared that it's great for creating a "dewy look," and she uses only two pumps of the product, applying it carefully to much of her skin.

She follows her foundation up with concealer, and then moves to her brows, working to better define them. She's quick to note that for those following along at home, she's a self-taught brow and makeup expert, learning mainly from YouTube. Applying a clear dose of brow gel, Jackson assures viewers that after using eyebrow gel, your hair is definitely staying in place.

Moving onto the shadow, Jackson uses two shades from the UOMA Carnival Color palette, creating a natural look. "I'm scared to experiment and try all those crazy shades," said. "When you're doing a neutral or natural shade, you just can't mess it up." To fully complete the look, she adds highlights to the center of her lids, adding an extra pop. Completing the eyeshadow routine, she adds a touch of mascara.

From there, she moves to her favorite step — contouring. Creating a "glowy, bright" face she applies bronzer to her nose, cheeks, and forehead. Adding a "tiny dot" of highlighter on the center and bridge of her nose, she admires the "amazing" results before mixing two blushes together for a blended look.

Finishing her face, Jackson adds NYX Lip Liner for a contrast, before adding some Dior Lip Gloss and Fenty Lip Gloss. And to ensure the epic look won't fade, she applies some finishing spray. Closing the video, Jackson hints at a possible future in beauty blogging, saying that although the featured look relied on natural colors, she does want to start experimenting.

Take notes and watch the routine for yourself, below. Plus, keep scrolling for the products used by Jackson in the clip.