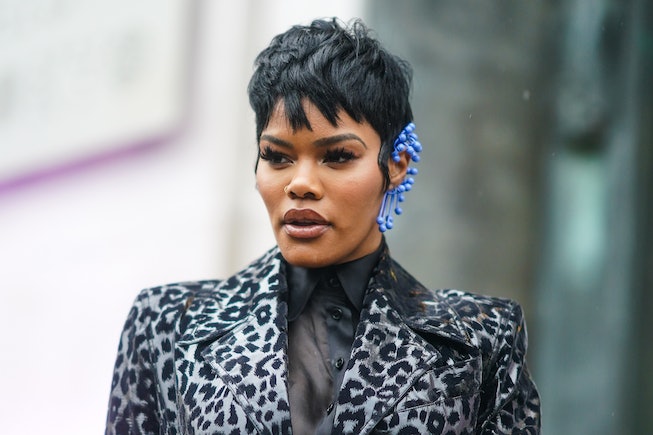 In an emotional Instagram post that touched on a childhood dream come true, Teyana Taylor revealed that she created a capsule collection for M.A.C. Cosmetics. The collab, which M.A.C. reports was a year in the making, was unveiled via Instagram, and featured Taylor giving 'gram followers a sneak peek at the beauty goodies.

An exact release date for the capsule collection, due out July 2020, hasn't yet been announced, and M.A.C. has not shared a look at any of the products, but Taylor did confirm she created the lipstick she's wearing in her campaign imagery. Her social media announcement featured the multi-talented star donning an all-yellow outfit, and her lips are swathed in a dark, velvety shade of red that's dripping in gloss.

Along with news of the impending capsule collection, Taylor shared what the new role meant to her. "I remember walking by the Mac store on 125th street coming from school, amazed at all the dope campaign ads spread across floor to ceiling windows & on other major department stores," she wrote. "MAC Cosmetics really inspired me because they were one of the first mainstream companies to fearlessly and unapologetically embrace woman of color and the LGBTQ Community. That was big for me being a young black girl from Harlem."

Continuing, she noted that she has specifics intentions with the collection. "I’m hoping to inspire other young black women that anything and everything is possible & that our black is STUNNING," she captioned the photo.

News of the M.A.C. collection isn't the only exciting thing happening in Taylor's life. As CNN reports, she confirmed her pregnancy in a new music video. She's also scheduled to release her new album, titled The Album this month.

See the Instagram announcement from M.A.C. and Taylor, below.