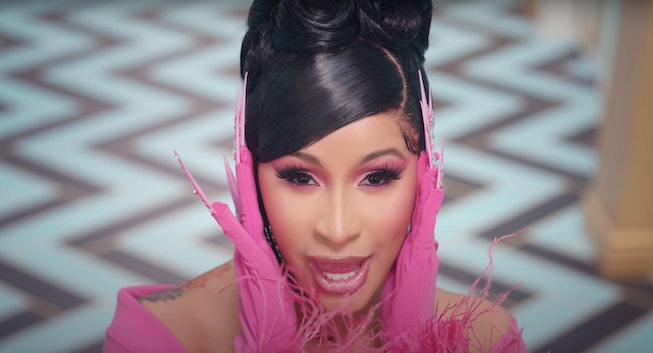 There are few things in 2020 that draw the attention of the entire internet, but Cardi B and Megan Thee Stallion's joint "WAP" video was certainly one of them. There's so much to love about the video — set design! theatrics! costumes! celebrity cameos! — that even Twitter had a hard time busting out its takes and screenshots, so it was understandable that one of its best features didn't get it's fair shine: the over the top, sculptural nail art.

Like most of the beauty in the video, the manicures were dramatic, and there was no shortage of style switch-ups throughout its four-minute-and-12-second run time, seeing Cardi B with a total of five ornate nail sets, and Megan with two (that you could see, given her use of gloves in much of the video).

From matte leopard pattern to blinged-out pink, yellow, and black styles, every extremely long press-on was shared by Cardi's go-to nail artist Jenny Bui via Instagram, where she noted the designs were all sponsored by Swarovski and Dreamtime Creations. She also shared that fans keen on the manicures will be able to get ahold of them soon enough, revealing that the long press on styles will soon be available online for purchase.

"Really want to say thank you @iamcardib for all the opportunities she has given me to be part of history in the making and watch her grow," Bui wrote in the caption. "It has been an amazing amazing journey and I can't wait to see what the future has in stored [sic] for us."

For Megan, her longtime nail artist Coca Michelle opted for shorter (though, to be fair, still very long) square-shaped nails in two looks — one in solid pastel yellow, and the other in a glimmering, glitter silver shade. The video's many cameos didn't disappoint on the nail front either, and how could they when resident nail art connoisseur Rosalia was involved? The Spanish singer showed up to set with perhaps the most intricate manicure, with an array of literal gold earrings fastened into the tips of bold red nails, done by LA-based artist Britney Tokyo.

Below, finally get your up close look at the nail art from Cardi B and Megan Thee Stallion's "WAP" video.