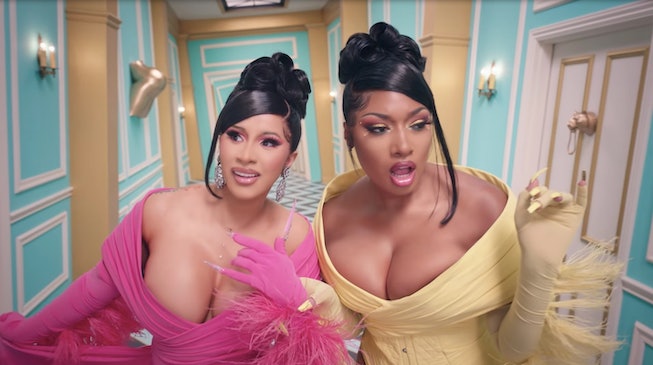 The wait is finally over — Cardi B and Megan Thee Stallion's highly anticipated collaboration has arrived — and it's nothing less than one would expect. "WAP" — which stands for "wet ass p*ssy" and finds the two rappers gushing about their assets (pun intended) — is produced by Ayo and Keyz, and marks Cardi B's first release since 2019's "Press." The Colin Tilley-directed video is filled with more surprises, including guest cameos from Normani, Rosalía, Mulatto, Sukihana, Rubi Rose, and Kylie Jenner.

The track's minimal and spare production — just a beat, hi-hats, and the looping phrase "there's some whores in this house" — allows for Cardi B and Megan Thee Stallion's witty one-liners to truly shine, of which there are many. An early one courtesy of Cardi finds her bragging: "I don't cook, I don't clean, but let me tell you how I got this ring."

In the video, the duo cycle through incredible look after incredible look — one of them being a custom matching pair of lime green and purple Mugler catsuits — as they wonder through a massive and ornate fun house. Doors open into snake-filled rooms and introduce new characters. A glimpse inside Normani's room finds the pop star in a black-and-white checkered fit, breaking it down a la the 2019 Savage x Fenty show.

"I wanted a lot of different females, not just female rappers. I wanted different... A lot of different people. And y'all going to see it on the music video as well, from models to influencers and everything. And I really wanted the video to be very sexy, very clean, very nice, very cut," Cardi B said about the song and video in an interview with Zane Lowe on Friday.

Cardi also revealed that releasing this song was a huge moment for her, "cause I haven't put out a song in a long time. So I feel like I'm re-birthing myself or something." Welcome back, Cardi.