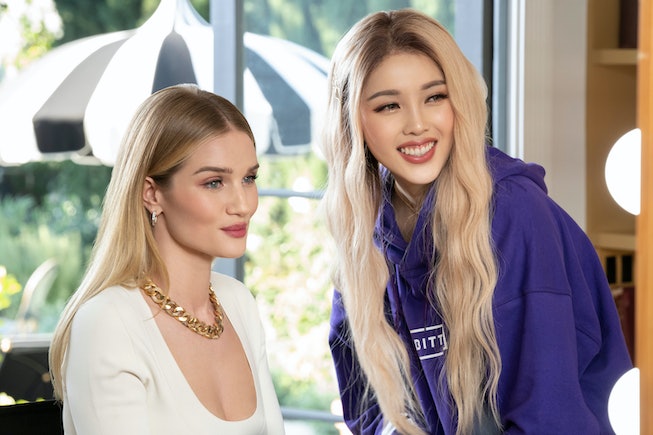 In a new interview on About Face, the Quibi series interviewing celebrated members of the beauty industry, viral superstar PONY shared the secrets behind her celebrity transformations. Sitting down for a chat with About Face host, Rosie Huntington-Whitely, PONY detailed how she uses makeup to temporarily become another person.

The full interview appears on the weekly Quibi series, but as a new clip from PONY's episode shows, her makeover process is quite extensive, and begins with some serious research. Speaking particularly about the popular Jenner and Swift videos — which have racked up over 7.3 million and 22 million views respectively — PONY said that she always starts her process by securing a front-facing photo of herself. She then compares the photo to an image of the celebrity she plans to replicate, seeing where the differences in appearance are.

From there, she begins to think about what tools will help her make the transformation. "I'll practice this up to six times before I go ahead with the full transformation," she said.

As for why she decided on Swift, PONY explained that even though her jawline differed from Swift's, she was able to use makeup to make the transition seem more seamless. And based on PONY's continued success, and her more than 5-million subscribers, it appears that YouTube thinks her process is pretty spot on, too.

Through the rest of the episode Huntington-Whitely speaks with PONY about how she got into the beauty world, the pressure of introducing so many Western brands to the Korean market. Bonus? PONY also ends up doing Huntington-Whitely's makeup.

Take an exclusive peek at PONY's About Face appearance, before the episode premieres on Quibi on August 13, below.