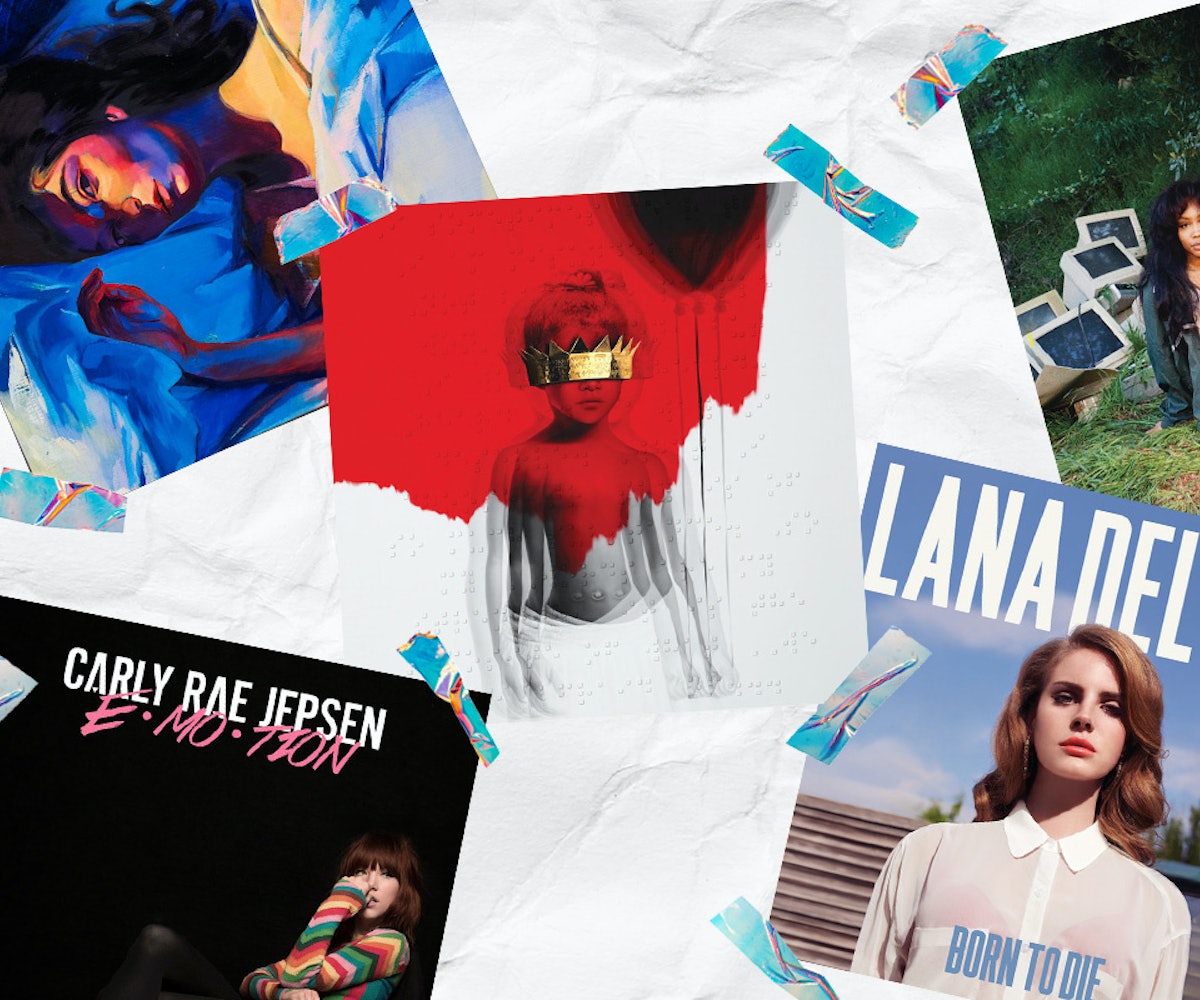 The 2010s were chock-full of albums that became the soundtracks of our lives, all the while changing the shape of the music industry as we know it. We experienced a cinema-worthy arc of Kanye West's artistry — from critically heralded My Beautiful Dark Twisted Fantasy in 2010 to the perpetual work in progress The Life of Pablo, to his recent pivot to gospel with JESUS IS KING — and saw Rihanna transform from reggae-infused R&B baddie on-the-rise into the wealthiest female musician in the world. Beyoncé taught us the many manifestations of self-love, with Lemonade's storied nuance and Beyoncé's addictive vanity, and Lana Del Rey helped to define the disassociated sad girl identity of a generation.

It would be futile to rank all of the albums that came into fruition over the past 10 years, but as 2019 comes to a close, we would be remiss to pass up the opportunity to look back at the music that personally claimed the top place in each of our hearts. Below, NYLON staffers offer up their favorite albums of the 2010s, including Carly Rae Jepsen, SZA, Frank Ocean, and more.

As far as international celebrity goes, Rihanna's star rose to unbelievable heights over the course of the 2010s. Aside from launching a set of inclusive, industry-disrupting brands — Fenty Beauty cosmetics, Savage X Fenty lingerie, luxury label Fenty in partnership with LVMH — and dominating red carpets with her fearless fashion sense, she dropped Anti in early 2016, which has been in heavy rotation ever since. It's a body of work that boasts one memorable anthem after another, and with its themes of empowerment and independence (paired with its genre-defying sound), we anticipate it dominating dance floors for generations to come. Rihanna stans are surely heading into the next decade with only one question on their minds — where's the album? — but if she spends the rest of her career focused on building her fashion and beauty empire, at least she left the world with what will likely go down in history as her magnum opus.

Beyoncé's self-titled 2013 album changed not only the way we encounter modern music releases, but Beyoncé herself. By dropping an entire album — and corresponding videos — overnight, Beyoncé led us by the hand into the streaming era with grace, making the signing (and keeping) of surely hundreds of NDAs look effortless. In taking us on one of the expertly-executed emotional journeys we've come to expect from the queen of Houston — marital bliss and diss tracks ("Drunk In Love," "Jealousy"), bluesy R&B ballads ("Rocket"), freakum' dress getting-ready-with-your-girls anthems ("Yonce," "Partition,"), and songs examining vulnerability from multiple perspectives ("Mine," "Pretty Hurts"), Beyoncé did what she always does and made us fall in love with her all over again. But it was the sprinkling in of her Chimamanda Ngozi Adichie-sampling track, "Flawless," that altered the way we view both Bey and her pop star peers. By proudly declaring herself a feminist at a time when women of all stripes were still shying away from the word, she asked us to reevaluate the social and political responsibilities of an artist with a platform. While we'd spend the next decade debating whether feminism still counts if it's dripped in capitalist aspirations, the artist beckoned us to follow her lead into a new era.

Honorable mention: How Big, How Blue, How Beautiful, Florence + the Machine; The Idler Wheel Is Wiser Than The Driver Of The Screw And Whipping Cords Will Serve You More Than Ropes Will Ever Do, Fiona Apple; Pure Heroine, Lorde

Only Lana Del Rey can take something as mundane as drinking and turn it into poetic lyrics — e.g. "My pussy tastes like Pepsi cola" and "Drinkin' cherry schnapps in the velvet night" — that you want to repeat to yourself over and over again. Her 2012 album, Born to Die, is full of such visceral assertions, words that transport you to another sonic landscape that only Lana is part of, with songs like "Blue Jeans," "Video Games," and "Summertime Sadness." Like the Diet Mountain Dew that she sings about that lingers on your lips after you drain it on a hot summer day, Born to Die stays with you long after the last song — even almost a decade later.

It was quite a decade for the sad, gay, and horny in music; even better if you were (and still are) all three. Masseduction checks every box. Annie Clark's most personal work presents lust and self-loathing in their most twisted forms; using sexual role-play on "Savior" to depict a partner's self-destruction, to wishing for her own violent demise on "Smoking Section." Though albums sometimes lose their spark as they're remixed and repackaged over and over again, that was not the case as Masseduction became Masseducation just one year later. Stripped of synths and thumping bass, Clark's sexy, cynical electropop album openly bleeds over piano, a masochistic testimony filled with yearning and grief. Clark has built the ultimate musical dichotomy: an album to fuck to and an album to drown your sorrows in, identical in lyrical and melodic content, but complementary to one another in the emotions they evoke.

Carly Rae Jepsen's 2015 album E*mo*tion is, simply put, the ultimate pop album. At the time of its release, E*mo*tion underperformed on the charts but received the critical acclaim that 2012's Kiss was (unfairly) denied. I've listened to this album all the way through a staggering amount of times, with each listen convincing me of a new favorite track. On first listen, it's the glittering, '80s synth influenced ballad, "All That" produced Dev Hynes and Ariel Rechtshaid; the next it's the ROSTAM-produced, sexy, dark, pulsing "Warm Blood." Each song exists outside a singular narrative, careening between feelings of the highest of highs and lowest of lows. One minute I'm on top of the world with "Making The Most of The Nigh," and the next I'm sobbing to "Your Type" for the hundredth time. E*mo*tion is less about Jepsen and more about you, and the nights you've danced, cried and loved before crying some more.

Honorable Mention: The Suburbs, Arcade Fire; Are We There, Sharon van Etten; Be the Cowboy, Mitski

When I look back at the music I listened to the most this decade as a whole, most of it fits under the broad category I like to call "sad girl music" — which is exactly what it sounds like: sad music made by women. (Think Phoebe Bridgers, Soccer Mommy, Snail Mail, Fiona Apple, Lucy Dacus, etc., who all put out suburban-themed albums this decade —and yes I am cheating by listing them here.) The album that kicked off this decade-long genre binge for me, and has perhaps stuck around the longest, is Beach House's 2010 Teen Dream. Perhaps more wistful than sad, and wholly dreamy, it's 10 perfect songs that I come back to as a whole over and over again.

SZA's debut album Ctrl reminded me why, as a teen, I fell in love with R&B in the first place. For a long time, I wasn't really keeping up with the musical genre, but thankfully, SZA changed that. I played this album nonstop upon its release through the summer and fall, and recently, I listened to it again after a while of having it sit idly in my music library. As cheesy as it sounds, I still get all of the feels during every track because of SZA's genuinely raw and gritty vulnerability.

Favorite Album: When We All Fall Asleep, Where Do We Go?, Billie Eilish

No other album has changed the music landscape quite like When We All Fall Asleep, Where Do We Go? 17-year-old Eilish has not only managed to break record after record (quite literally) with her debut album, but has continued to use her platform to speak up about climate change and inspire teenagers to be whoever they want. The success of the album is not only a testament to the ways in which Gen Z will continue to challenge the pop-landscape, but proof that being yourself is the most powerful way to make actual change.