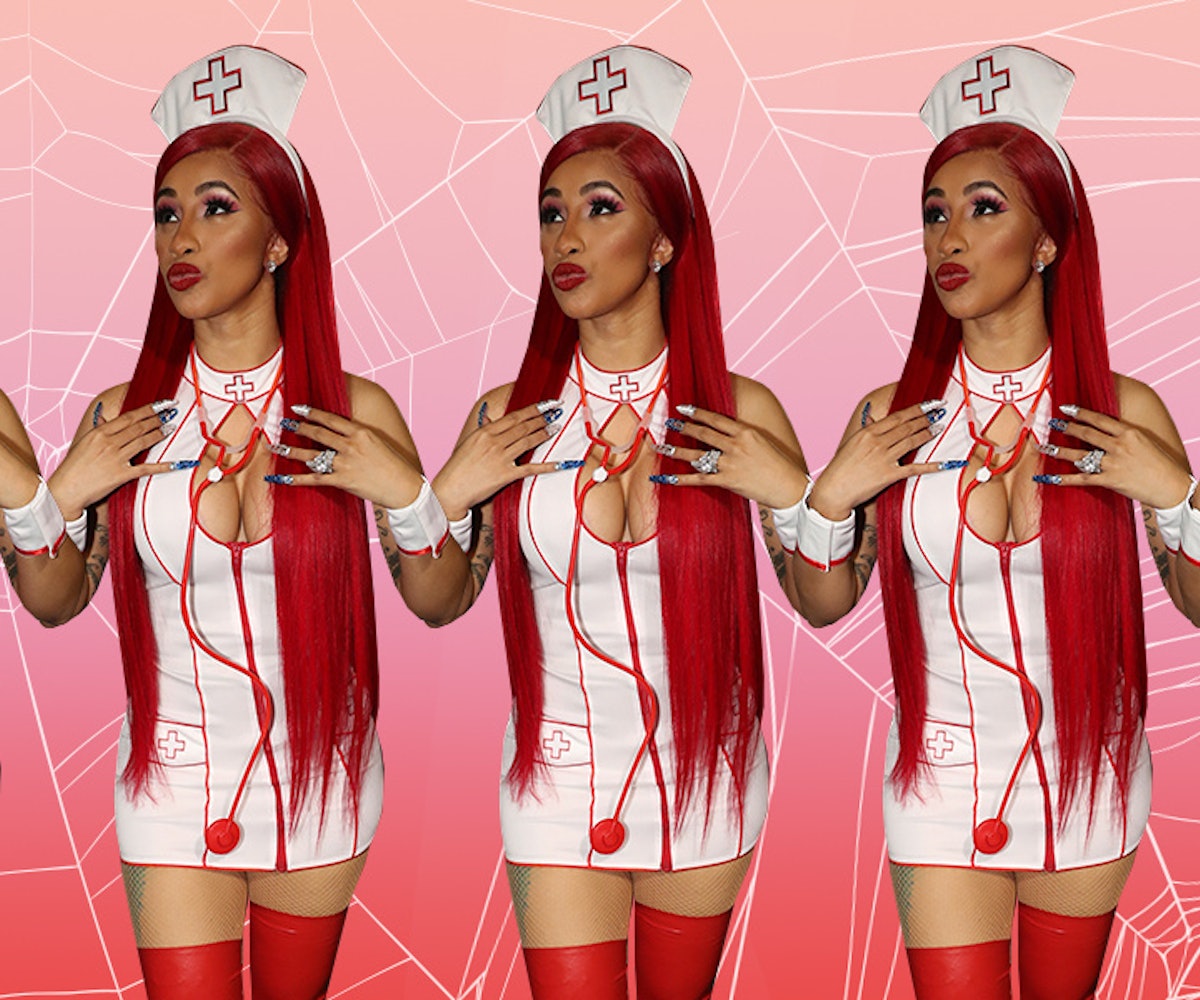 Though Halloween has yet to officially arrive, celebrities have already started showing off their most creative costumes for you to pull last-minute inspiration from (or just scroll past in awe). Some have already shown they take Halloween very seriously; Halsey, Nina Dobrev, Demi Lovato, and more have been spotted wearing jaw-dropping costumes on multiple nights now. Cardi B chose to keep it traditional by dressing up as a (Latex-clad) nurse, while Camila Mendes somehow found a way to make Rick and Morty's Pickle Rick fashion-forward.

Below, we've rounded up the best celebrity Halloween costumes of 2019. Stay tuned as the list continues to grow throughout Halloween week.

Camila Mendes, aka probably the only person who could pull off "Sexy Rick."

My soul left my body when I saw how well Liza Koshy transformed into Vogue's Anna Wintour.

Evan Peters and Halsey as Sonny and Cher

A sure way to make a relationship official in 2019 is with a well-done couple's costume.

I would like to never run into this group costume in real life, but it looks incredible a safe distance away on the internet.

Paris Jackson and Gabriel Glenn as Scooby Doo and Shaggy

Thank you, Paris Jackson, for deciding my costume for this year.

This costume has me as obsessed with Jhené Aiko as I once was with Pokemon.

Kiernan Shipka and Luke Cook as The Devil and Sabrina Spellman

Freaky Friday, but with their Chilling Adventures of Sabrina roles.

Probably the easiest last-minute group costume I could think of, but with great results for the 'gram.

This costume doubles as an excuse to sing louder than everyone else once the party starts going.

Nats Getty and Gigi Gorgeous as Jack Skellington and Sally

Cardi B as a nurse

An oldie but a goodie.

Gabrielle Union as Herself in 'Bring It On'

Gabrielle Union really "brought it" when she dressed up with her daughter as her Bring It On character.

Paloma Elsesser as an elf

Can Maleficent become the new all-black-plus-a-headband costume for the next few years?

The Von Dutch bag really takes me back.

The caption makes this costume even better, if you ask me.

Again... not a costume I'd like to run into in real life, but I have to hand it to Demi for killing her Pennywise look.

Kylie Jenner and Anastasia Karanikolaou as Madonna and Britney Spears

Kylie and Stassi recreated one of the most iconic moments from music history.

Kate Beckinsale as Audrey Hepburn in 'Breakfast at Tiffany's'

Kate Beckinsale bringing Tiffany's to 7-Eleven. Can we also talk about her friend's spot-on Elton John?

Petition for Nicki Minaj to star in a Suicide Squad film.

Picking your Halloween wardrobe based on whether or not it's the reason Google Images was invented is always a good choice.

Using your costume as an opportunity to make fun of your boyfriend's previous Ramen-noodle shaped haircut is also a very good choice.

Ciara and Russell Wilson as Beyoncé and Jay-Z

Where do I get this neon green bodysuit? I'm ready to be a slime playgirl!

The Aladdin remake we deserve!

Tess Holliday as The Kool-Aid Man

Heidi Klum as Something From Our Nightmares

I'm guessing she's a cross between an alien, Frankenstein's monster, and a skinned corpse.

Ok but, I'm kind of really into Jaden Smith as a blonde

Cardi B as Poison Ivy

So what's the sitch?

This looks is a classic for a reason.