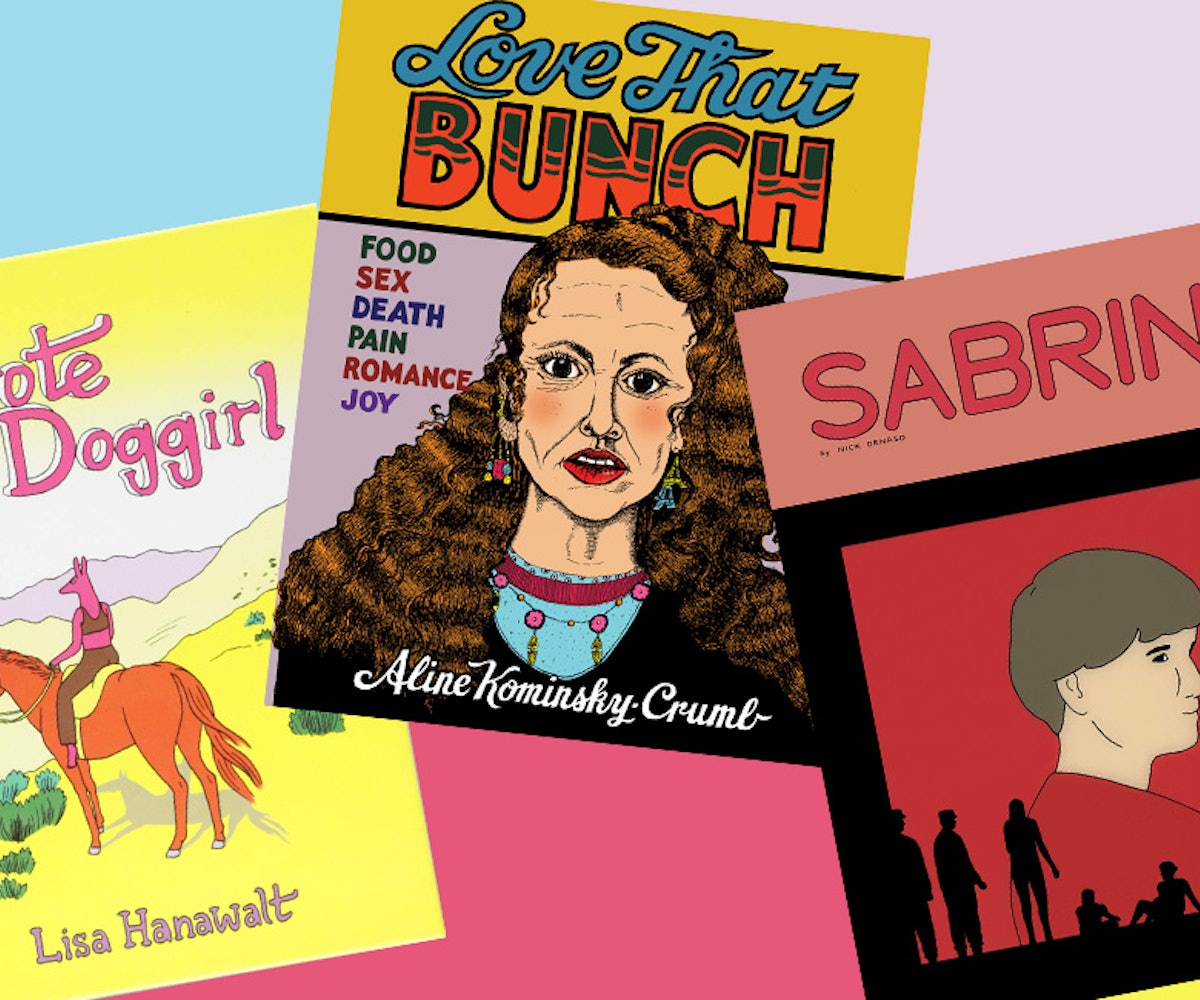 One of the perils of compiling Best Of lists lies in the inherent absurdity of attempting to fit often radically disparate works of art into one reductive category. (Another of the perils is in thinking, even for a moment, that Best Of means anything other than Personal Favorites, but what can you do.) Even when a category feels like it makes sense as a discrete entity, you still wind up with a list comprising wildly different things, which make you feel wildly different ways. But, actually, that's kind of great, isn't it?

And perhaps there's no better example of this than the following list of the year's best illustrated books. Some of them are memoirs, some are fiction; some are dense with expository text, others are far more spare, and one doesn't even use real words to get its message across. But all of these are beautiful examples of the ways in which graphic art and the written word can work in harmony together, complementing the other, making for a whole that is both visually and intellectually arresting, sometimes hilarious, other times full of despair, but always, always worth spending time with and savoring.

Here are our favorite illustrated books of the year.

"Once upon a time, I lost something. Let's call it my 'shadow.'" So begins Liana Finck's strange, beautiful, pathos- and joy-filled graphic memoir, in which she explores what it means to be an artist, a daughter, a woman, a human; to be alive and to be yourself. It's a coming-of-age story and creation myth all wrapped up into one, and Finck fills it with moments that feel quietly miraculous, sublime in the manner of a lightning storm seen in the distance.

Read my interview with Finck, here.

For anyone who wants to feel fully eviscerated by the fiction they consume, Sabrina is undoubtedly the graphic novel for you. It is filled with contemporary horrors; everything from incel-dominated chat rooms to the numbing terror of living in a country perpetually at war to the daily realities of living in a society where violence against women is the norm, are represented here. Drnaso expertly shows the ways in which modern America is a twisted house of horrors, and how it's encouraged the flourishing of wild conspiracy theories, because reality is too difficult to understand on its surface. This book will haunt you in the most profound way possible, staying with you long after you turn its final page.

Raucous and raunchy and filled with examples of how a young woman's sexual desires often conflict with her politics, Love That Bunch is an exhilarating ride, taking readers from New York City in the '60s, when Kominsky-Crumb was figuring out who she wanted to be in this world, to years later, when she'd grown up, had children, and was still figuring things out. This book comprises many of Kominsky-Crumb's best early comics, as well as a new story, "Dream House," which also visits her childhood but from a perspective of 40 years in the future. This is a perfect book to give to any woman, of any age, in your life.

Part of It: Comics and Confessions by Ariel Schrag (available here)

Do you ever read a book and love it so much that you desperately wish it had been around for you at other times in your life? Times when you felt like nobody understood what it was you were going through? Times when you just felt so alone? Well, this is one of those books. In Part of It, Ariel Schrag documents different points in her life, dating from childhood and up through her early 20s, when she grappled with the concept of connection, what it means to be a part of something, how that can feel liberating and isolating all at once. Part of It is consistently hilarious, but Schrag never shies away from uncomfortable memories, those times that are truly cringe-worthy upon reflection and are therefore all the more important to revisit and understand. This is a perfect coming-of-age book—smart and honest and unafraid of visiting the points in our lives when we didn't yet know who we wanted to be, or who we already were.

Read my interview with Schrag, here.

This gorgeous book, filled with watery yellows and pinks, is a specifically strange, beautiful, sad story about a girl and her horse, and about the expansiveness of love and the unlimited possibilities present once we allow ourselves to be less alone. And it's even further proof of Hanawalt's peculiar genius, her ability to access difficult truths in the most absurd ways possible.

Read my interview with Hanawalt, here.

Can you imagine a world with no men? Don't worry if you can't; Aminder Dhaliwal does it for you in this smart, funny look at a dystopia (men have been wiped out by a birth defect) that actually kind of resembles something verging on utopian, as women are able to live free of the constraints of anything resembling the patriarchy, and can tell their own stories, make their own rules, and determine for themselves what it means to be happy, to be human, to be alive.

Read my interview with Dhaliwal, here.

A pure pleasure to explore, this wittily illustrated book is an homage to William Steig and an incredibly fun adventure for anyone who loves word games, New York City, and jaunty drawings of rats. That's everyone, right? Truly, though, Avillez and Young have created a real conversation piece with this wondrous book, which will have readers guessing the meanings of seemingly inscrutable letter combinations (hint: sound things out, and you'll have an easier time understanding) and delighting in seeing the city they love come to life on the page. This is the kind of treasure you keep and pass down to your kids one day.

Read my interview and watch a video with Avillez and Young, here.

Minding the Store: A Big Story about a Small Business by Julie Gaines and Ben Lenovitz (available here)

Another consummately New York illustrated book, Minding the Store tells the story of the conception of Fishs Eddy, an iconic New York institution for home goods. It's the kind of place that is hard to imagine someone opening anymore, particularly as a storefront in Manhattan, so inundated is this borough with the kind of big box stores that feel better suited to an exurban strip mall than a cosmopolitan center. Anyway. What you get reading this book is not just a stab of nostalgia for a bygone New York, but also an appreciation of the ways in which this city has long offered opportunities for dreamers of all kinds. It also will have you thinking about what it's like for someone to be able to switch back-and-forth between a Southern and Staten Island accent.