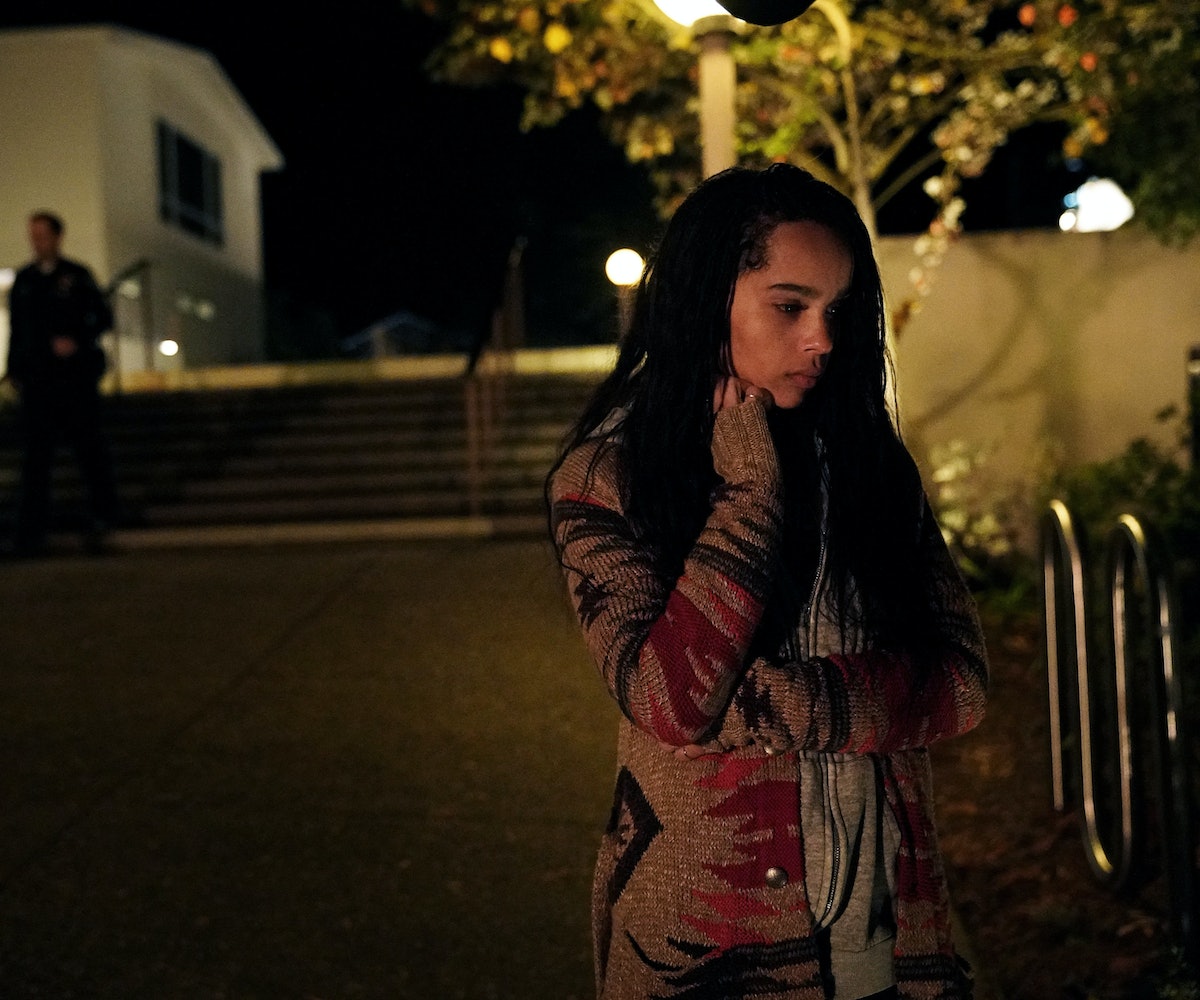 Finally, Big Little Lies has returned to fulfill my deep desire to voyeuristically judge rich white people. This season, they've given me another delicious morsel by casting Meryl Streep as the overbearing, mother-in-law version of Bran Stark in the final season of Game of Thrones: suspicious, creepily ever-present, and not afraid to share some harsh truths. Of which there are many, because Big Little Lies is a show about white women transgressing the boundaries of suburban domesticity—and in the case of Madeline (Reese Witherspoon), basic human dignity—and I love it. What I don't love, though, is what this means for the singular Black woman in their world: Bonnie (Zoë Kravitz). She's become a sacrificial lamb, caught in their web of lies.

For what it's worth, Bonnie never really stood a chance at completely fitting in anywhere Madeline is present (which is most places, because Madeline can't ever mind her own business). As the new, younger wife of Madeline's ex-husband Nathan (James Tupper), with whom she's started a new family, Bonnie is always going to provoke Madeline's ire. More than that, though, Madeline is judgmental and often condescending toward people who get in her way (she's so rude to crossing guards!), so it's not at all surprising that Bonnie has been permanently positioned as an outsider, at best, and a foe, at worst, when Madeline is feeling particularly prickly. That Bonnie is a free-spirited yoga instructor only exacerbates these circumstances, but it's the fact that she's Black that makes her even more of an anomaly; even though no one else in Monterey ever mentions her race, it's definitely one of the things that marks Bonnie as "other." She also didn't have much of a story line in the first season; Bonnie was often overlooked until its final moments, when she pushed the abusive rapist Perry (Alexander Skarsgård) to his death, solving one problem, and, it now seems, creating another.

It didn't go over my head that amongst a group of white women, Bonnie was the one to put an end to the tyranny of an abusive man, and it's clear that it further marked her as being different. But we could only guess at how much more isolated Bonnie would be. Season 2's premiere makes clear that as Madeline, Renata (Laura Dern), Jane (Shailene Woodley), and Perry's widow, Celeste (Nicole Kidman), are laser-focused on resuming their lives, Bonnie is struggling deeply with the repercussions of that night. She's depressed and actively separates herself from people, including her child and husband. She's racked with guilt about taking a life and upset that she has to keep it a secret, because Madeline lied to the police that Perry slipped and fell, and the rest of the women corroborated Madeline's lie. And so we see Bonnie outside the police station, torn about whether or not to confess what really happened to the police, weighing the effect a confession will have on her family and everyone else involved. As tends to happen, an unfair proportion of the collective burden falls on the shoulders of a Black woman, and she must figure out how to move forward on her own.

Perhaps this would be less egregious if Bonnie wasn't already so marginalized within the series, with most of her personality comprised upon physical traits, with an overwhelming amount of attention placed on her body, whether by seeing her dance more freely at a kid's birthday party, or focusing on her sensuality and Zenned-out temperament during her yoga practice. She's the antithesis to Madeline's neuroticism, so, of course, Nathan and the teenage daughter he shares with Madeline are more drawn to her. But none of that made for much depth or insight into who she is as a character, which is why it's so disappointing to see how she's positioned at the start of the new season.

last year that she pushed for race to be more of a "story point" for Bonnie, but that her she wasn't "heard." So despite

her insistence in Rolling Stone

, that Season 2 will see Bonnie having her own story and not being used to tell someone else's, it seems like that will happen—if it happens—further into the season.