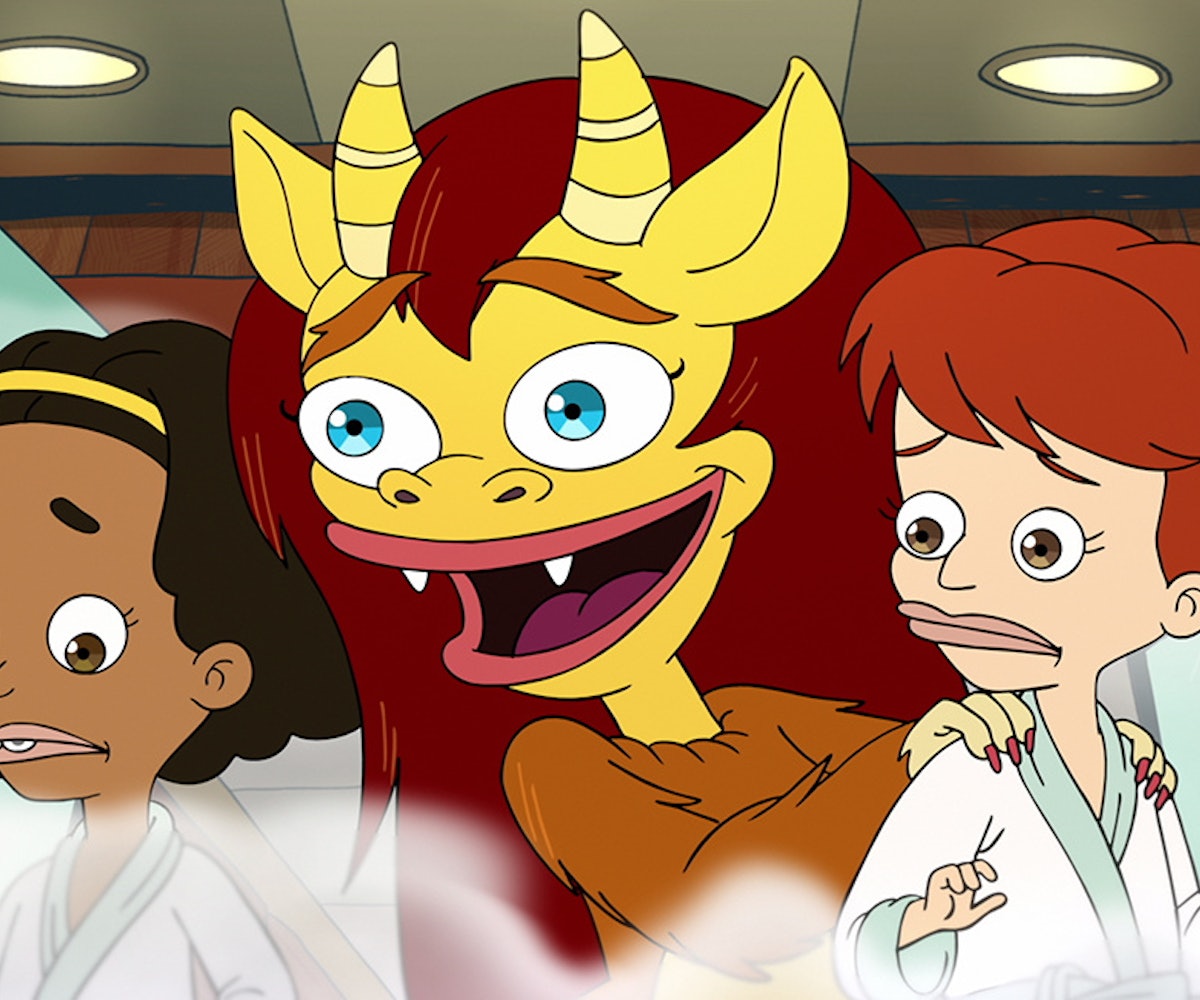 For most of my teenage years, I was absolutely mortified by the fact I had periods. For some of the excruciating shame I felt during this dark time, I blame my uptight Catholic school, where they treated sex education as a minor inconvenience and were remarkably unhelpful in giving any guidance to their young, frequently bewildered charges. The rest I can only assume was due to the unrealistic expectations of "womanhood" bestowed upon me by pop culture, from Cosmo's terrifying sex tutorials to the glossy ingenues of Gossip Girl. The teenage girls reflected back at me were world-wise sex kittens with cool parents. There was no mention of periods, or all-consuming physical and mental insecurities, or how extremely gross puberty is. I would have killed for a little guidance; some sense that my gross body was, yes, gross, but not totally worthless. I never thought I'd find catharsis as an adult watching a cartoon show, but I have found exactly that with Big Mouth, the animated comedy created by Nick Kroll and Andrew Goldberg. And I guess, given how weird and messed-up puberty is, it kind of makes sense that the show to best depict it is weird and messed-up, too.

Comedy helps us to confront our worst fears and most personal demons, and, within the genre, the subset of animation has always proven a bedrock for visualizing that which conventional live-action cannot. Cartoon staples Beavis and Butthead, King of the Hill, and South Park set the precedent for doing so years ago; but, more recently, the likes of BoJack Horseman and Rick and Morty have proven playgrounds for innovative storytelling that confronts complicated, private hells, covering some of our most personal demons, from addiction and mental illness to familial abuse and toxic relationships. It seems fitting then that Big Mouth looks to the gross-out humor of its predecessors to confront the anxieties of puberty, but also to illustrate the undeniable comedy that comes with your body rapid-cycling through a series of progressively more alarming physical and emotional changes. (It's no accident that the show's theme song is Charles Bradley's cover of the Black Sabbath classic of the same name.)

In the show's second episode, Jessi (Jessi Klein) gets her first period while on a class trip to the Statue of Liberty. In a time when even tampon and sanitary napkin commercials still opt to show blue liquid rather than blood, it's noteworthy that Big Mouth shows Jessi's bloody underwear, and doesn't shy away from the trauma of a young woman's body going through a process for which she feels totally unprepared.

I had a similarly traumatic experience to Jessi (albeit I got my first period on a school trip to a local market town, which feels decidedly less glamorous), and can still recall with horror the little pamphlets which proclaimed the sudden bleeding from my genitals was a "monthly gift." That's the last thing you want to hear when you're 12—really, you just want someone to agree with you that being a teenage girl kind of sucks.

But being a teenage boy kind of sucks too. For Nick (Kroll) and Andrew (John Mulaney), the two best friends at the center of the story, the humiliation of being perpetually horny and extremely embarrassed about it sits right at the forefront of Big Mouth. Enter the antagonist of the show's second season, voiced by British thespian David Thewlis (best known to a generation as Harry Potter's Remus Lupin), The Shame Wizard. If The Hormone Monster is the cartoon embodiment of pubescent carnage, The Shame Wizard is every dirty thought, every cursory exploration, every time you looked in the mirror as a kid and hated what you saw. It's that little voice that tells you: You're disgusting and everyone hates you. And sometimes, it doesn't disappear when puberty does. It feels important that Kroll, Goldberg, and their co-creators Mark Levin and Jennifer Flackett, highlight the male experience, but they don't pretend that The Shame Monster is a uniquely male phenomenon.

In fact, in the second episode of Season 2, "What Is It About Boobs?", the subject of breasts proves a source of fascination for the male teenage protagonists while generating newfound stress in their female friends. While newcomer Gina Alvarez (Gina Rodriguez) feels uncomfortable with the male attention her newfound breasts attract, neurotic Missy (patron saint of horniness, Jenny Slate) is shamed about her lack of chest by sardonic classmates. A later trip to a Korean spa ends in a naked song and dance number performed by Maya Rudolph's Connie the Hormone Monstress, with the refrain, "I love my body, I love it all, every wrinkle every dimple big or small." It's a simplification of the societal anxieties around womanhood that largely stem from the patriarchal nature of mass media, but it's a message I would have killed to see on television when I was a 12-year-old.

Seemingly aware of its potential as a form of education as well as entertainment, the fifth episode of the second season, "The Planned Parenthood Show," sees a sex-ed class devolving into a series of skits about the vital work of this American institution. Exploring birth control options through a parody of The Bachelor, and ovarian cysts through a Star Trek riff, the show willingly tests the limits of its deceptively simplistic form, and acknowledges as much, breaking the fourth wall when at the end the incompetent teacher, Coach Steve (also Kroll), thanks "the liberal elite," by saying, "You convinced us to do an episode on Planned Parenthood, even though so many people are gonna be furious at us for doing it!" But with Planned Parenthood under seemingly constant threat from the Trump administration, it's more important than ever that shows like Big Mouth acknowledge its necessity in keeping so many people—particularly young people—safe and with access to and information about reproductive health care

Kroll and co aren't afraid to ditch the comedy when necessary too, notably in exploring Jessi's anger and subsequent depression regarding her parents' divorce. Envisioning these complexities as a sly malevolent beast named the Depression Kitty, Jessi quite literally ends up crying for help—and in the end, she's saved by her friends. "We didn't realize you were depressed, and that's on us," Andrew says. "But also on you. You should have said something."

The comment vibrates with the slightly insensitive irritation of a teenage boy, but through this confrontation, Jessi is finally able to admit to her friends (and to her mother) that she's not okay and needs help. That's a hard thing to do when you're an adult—let alone as a teenager.

such a constant delight. As a society, we might not be ready for mass full-frontal nudity, but 2-D animation is able to get away with more than live-action due to its naive renderings—particularly in the case of the primary color-heavy palette of

. This exaggeration of puberty

stretches to the point of absurdity while still managing to get at the heart of its serious subject matter and laying bare the reality of adolescence with the kind of maniacal glee that only comes from the relief that you survived the trauma of growing up. Rather than pretending that this time is anything less than biological warfare, Big Mouth's juxtaposition of crudeness and compassion captures everything that's awful and great about navigating your teenage years, disembodied cartoon dicks and all.