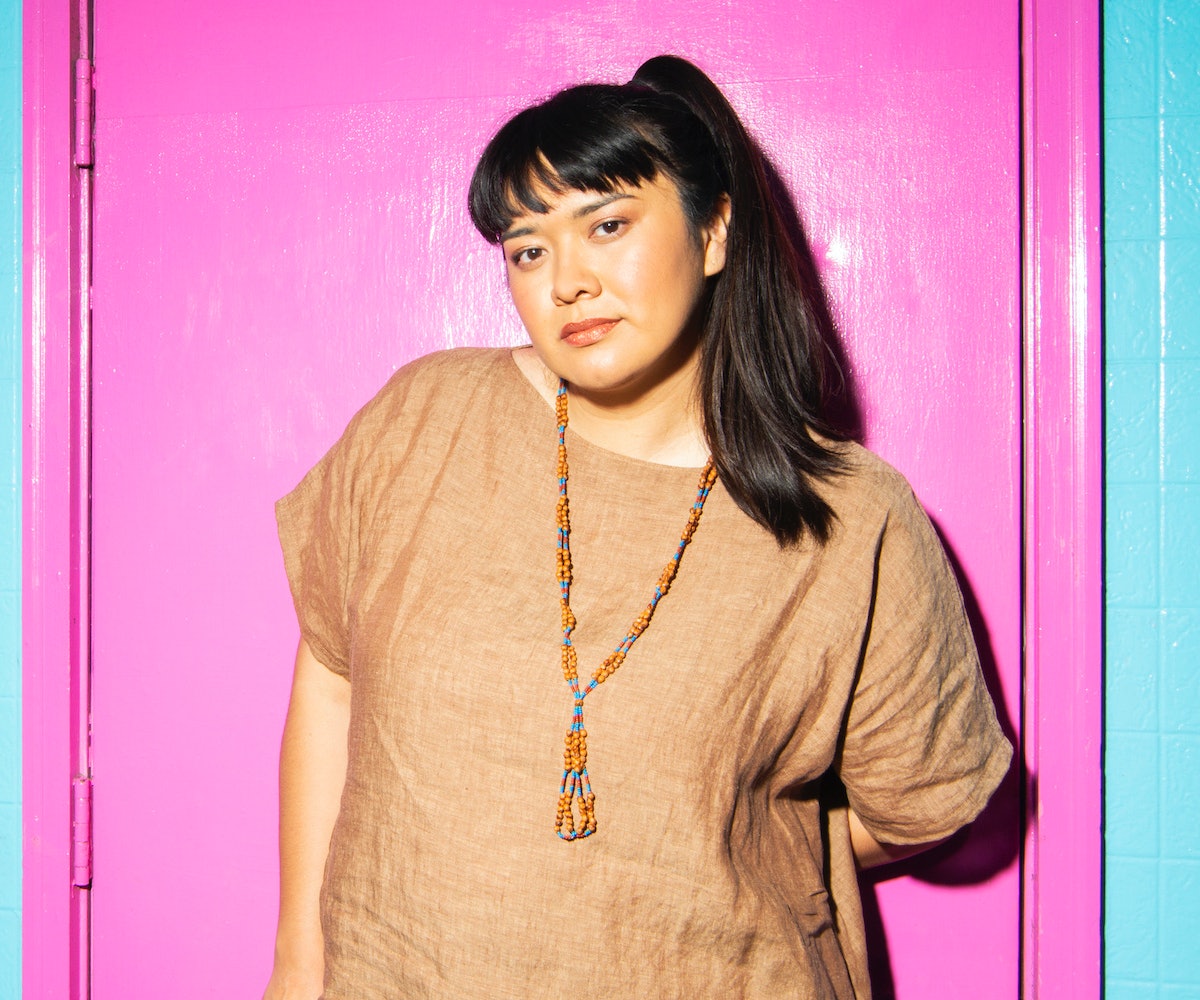 Katherine Paul opens up her sophomore album with a simple mantra: "We will always sing." It's the chorus to the lead track on At the Party With My Brown Friends, and it serves as a perfect introduction for what you will find in the music that follows. "I feel like there's this voice that people of color have, that they're always going to [say], You can knock us down, you can do this, but we'll always sing," she says. "We'll always stand up for ourselves. We'll always try and do good for the world, and support one another. And you—you, meaning the government, white supremacy, all that bad shit—you won't silence us. We will always sing."

Paul, who goes by KP, isn't quite sure she's ready for people to hear her new album. Nevertheless, At the Party With My Brown Friends, the sophomore project from her band Black Belt Eagle Scout, is now out in the world. "It feels like this whole release snuck up on me all of a sudden," KP tells me. Earlier this week, I sat down with the singer-songwriter for coffee in the backyard of a café in Brooklyn to talk about the album and everything that brought her to this moment

KP hails from the small town of La Conner, Washington—or, rather, the Swinomish reservation just over the bridge from the town—which attracts tourists for its annual tulip festival. Her father's family hails from Swinomish; her mother, a native Alaskan, moved to La Conner and was eventually set up with KP's father by his mother, in the ultimate matchmaking move.

KP's family, she tells me, "is pretty musical... My family had this drum group called Skagit Valley Singers." She grew up attending pow wows and organizing big musical events, which immersed KP in her culture's musical tradition. So, she says, "I guess it wasn't until I was in middle school that I started being interested in other types of music, primarily rock or punk."

The Pacific Northwest has a rich tradition of rock, obviously, with grunge and Riot Grrl roots digging deep. And KP was influenced enough by another local musician—Kurt Cobain—to want a Jag-Stang (a hybrid of Fender's Jaguar and Mustang guitars). The road to getting it, though, she tells me, was a little bumpy. "I had been going to the local music shop and seeing it and playing it and then having them put it back," she says. On the day her dad took her to finally purchase it, he'd also gotten KP her first car. "We parked [the car] in the back lot of the music shop, go in, and purchase the guitar. We're there for probably half an hour," she says. "We come out, and my car is gone." Although this would devastate pretty much anyone, KP's perspective on the whole thing is refreshingly bright: "The funny thing about that is, though, he got me a stick shift. I had been trying to learn how to drive it, but I wasn't really good at driving it... The car went away, and then I never had to learn [to drive stick]."

KP clearly has the knack for storytelling; it's present in her music, and in her passion for anthropology, which she studied in school. Initially, she grew interested in the topic through her mother, a lawyer. "[Studying anthropology] gave me an opportunity to learn more about native culture, from a bigger perspective. Not just Coast Salish, where I'm from, but all over. I've never really studied that—it was just sort of a thing that I had lived," she says. Although she jokes that a degree in anthropology isn't something that you can just immediately find a job with after graduation, she says, "I feel like it really opened up my perspective on how people interact with one another and how relationships work," both societal and personal. "It just makes it easy to write about."

KP's writing process is fluid, and her work is a reflection of her life around her. On her debut, Mother of My Children, she wrote from a place of alienation, she tells me. She was living in Portland where "there are way more white people than there are people of color." And she says, "It can be isolating… you don't see anybody who looks like you." But once she "processed all these emotions" through her first album, she says she needed to figure out what to do next with her music. "I have this nice, healthy life right now. I'm not sad as much, and it's because of these people in my life," KP says. So, At the Party With My Brown Friends is quite a literal title: "It naturally happened that a bunch of these songs ended up being about friendship and love and relationships."

With so much inspiration happening all around her, KP finds that words and melodies burst forth spontaneously—she's not the type to keep a meticulous notebook full of ideas. For the album's track, "At the Party," she'd figured out the guitar line and melody, when the opening lyrics, "How is it real when you don't even notice it," came out of her mouth while driving. She pulls out her phone to show me voice memos on her phone—hundreds of them—fuzzy demos ranging in length, pieces of songs that fit together like puzzle pieces.

These demos and bursts of creativity in mundane moments are all KP had to work with for At the Party With My Brown Friends—from lyrics to bass and everything in between, she did everything for herself other than hitting record outside the sound booth. "The album took a really long time to make because of that," she says. "Sometimes it feels lonesome, but also when you're doing it [yourself], it feels really empowering. This is all me. This is what I did."

And although it's difficult, KP says that her driving force remains the same: "I always have the intention of trying to get my music to indigenous people and to people that may not normally hear music like mine." She continues, "When I was growing up, I didn't have an indigenous indie music person that I could look to and the fact that I have this small ability to maybe be that for somebody and to maybe have that voice for them, that means the world to me."

At the Party With My Brown Friends is out now.