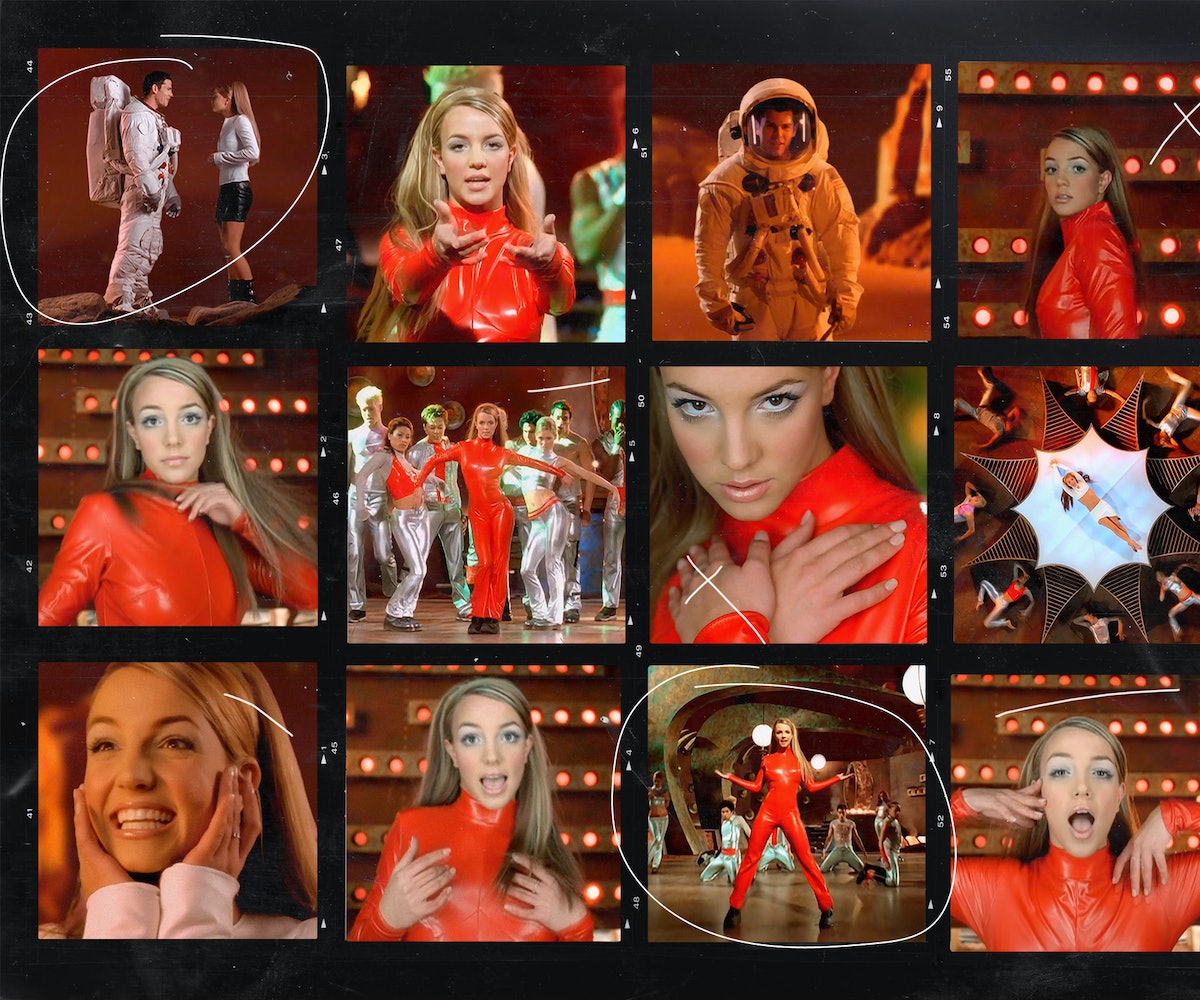 It was exactly 20 years ago to this day (April 10) when MTV's Making The Video aired a behind-the-scenes episode on filming Britney Spears' "Oops… I Did It Again" music video. The then-19-year-old pop star was gearing up to drop her sophomore album, an edgier follow up to her debut release "...Baby One More Time." To solidify this new era, the video for her first single — one that would top the Billboard charts and garner its own Grammy nomination — was a risky rendition of a space-age romance between an all-American astronaut and Spears as a Mars-based alien vixen with a penchant for red latex jumpsuits.

The iconic ensemble has become a pop culture staple, referenced at Halloween for the past two decades and quite possibly one of the most recognizable looks from a time when music videos were at their peak in the early aughts. Miley Cyrus even wore her own homage to the catsuit for her "Mother's Daughter" music video in 2019. According to Bustle, the red outfit was one of Spears' top requests for "Oops… I Did It Again."

"The night before the shoot, I was informed that Britney had hired a guy who did wardrobe for Michael Jackson to come up with a suit that she was going to wear on the day," says director Nigel Dick. "So, she rejected our suit. One's plans of having this gorgeous outfit all put together, which really had some style, I felt, were just chucked out the window and we went with a rubber suit basically." Plus, the black shoes that finished her look happened to be what she wore to set that day, since the original (red) pair was rejected.

"This jumpsuit made me very nervous because it was latex and I knew how much she had to dance," stylist Estee Stanley tells NYLON over the phone. "I knew that that would be really hard for her because, obviously, latex holds in all of your sweat." After the first take, Stanley remembers unzipping Spears' jumpsuit and "literally a bucket of water poured out of it."

"That was the most intense part, keeping her cooled down. She got really overheated when she would have to dance because something like that really traps heat in. But it was what she really thought would be the best look for [the video]," recalls Stanley. "Doing it in spandex or anything else didn't give the same effect that latex did. We really wanted it to feel Space Age and not too out-of-control sex pot, which I think added with the flared leg and the mock turtleneck."

A high neckline also appeared in Spears' second all-white look in the video, made up of an asymmetrical skirt and a matching crop top with elongated sleeves, which she wore while laying down on a web-shaped platform stage surrounded by her backup dancers, all dressed in similarly styled silver-and-red ensembles.

"That outfit went the sexier route, and almost everything was custom-made for this video," notes Stanley. "First, we did fittings with other pieces that we thought would be great and I don't think she really thought it was as good as it could get. She really wanted to have something that was very specific and original for her, and not just bought in a store."

But her last look, which appears when she meets her doting astronaut, takes on a more casual, early-aughts aesthetic: a black mini skirt, a fitted white long-sleeve top, and black buckled boots. "Because the red jumpsuit was so strong, we wanted her to still be sexy but a bit more subtle," explains Stanley. The final outfit change didn't last for long, though, as the video cuts to Spears' beloved red jumpsuit for the hit song's outro.

"It blew my mind how much of an impact one outfit would make in the world," says Stanley thinking back. "Sometimes people make a joke that it's just clothes, but it's actually not just clothes. It's a real statement. When you see something like Britney's video and everyone is dressing up as her for Halloween and people are wearing red and latex, she made an impact. It's not just by accident."

NEXT UP
Culture
Mowalola Teams Up With Bratz For A Daring, High Fashion Collection
Fashion
Jimmy Choo’s Collab With Timberland Gives The Classic Boot A Glam Makeover
Fashion
Kim Petras Wore An All-Denim Homage To Britney Spears At The 2022 AMAs
The Art Issue 2022
The Most Interesting Fashion Designers Right Now? Artists.