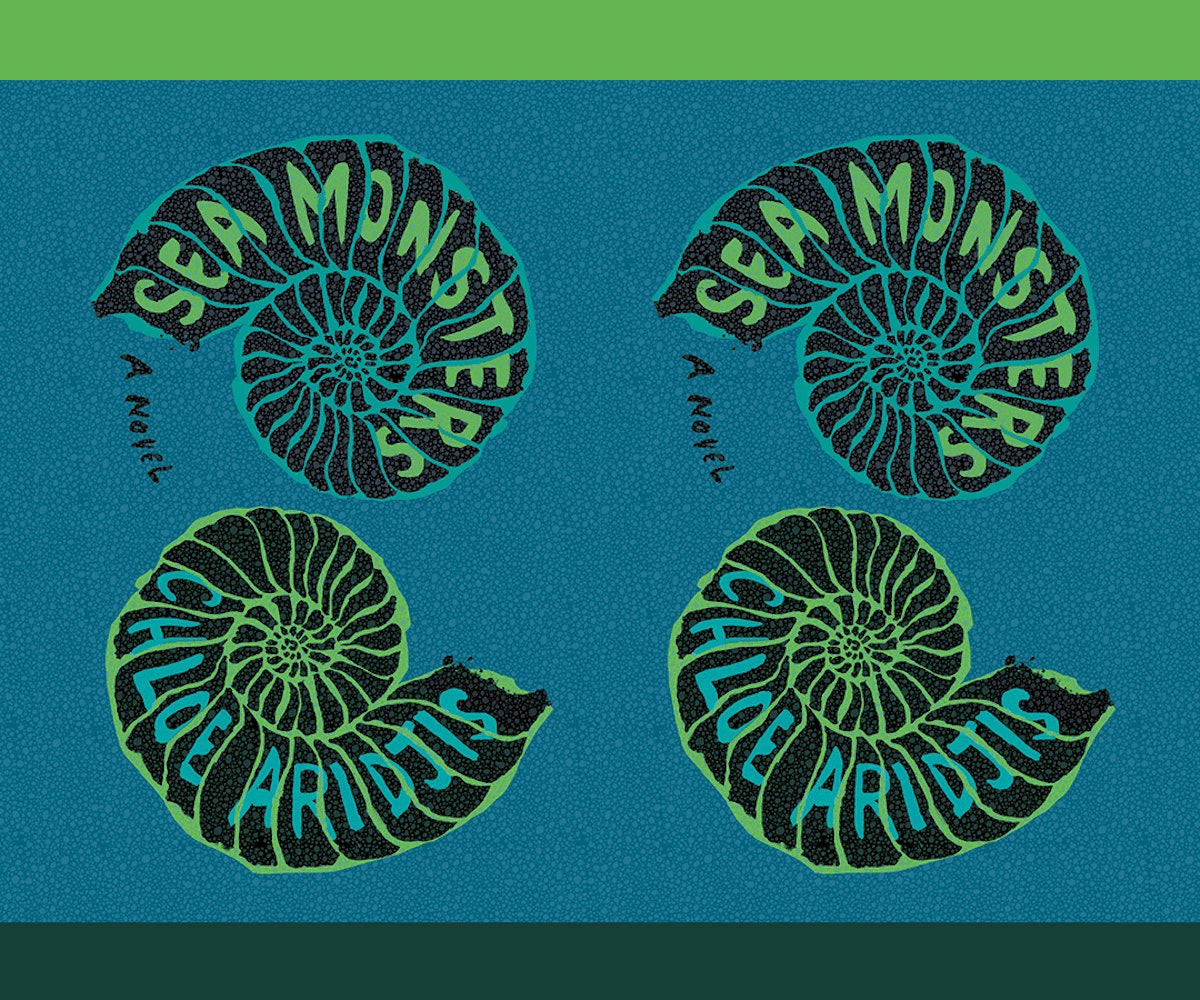 There is a feeling of disorientation specific to being in the water, one in which you simultaneously feel at home and on another planet, one which, of course, feels reminiscent of being in the womb—if only that were a feeling that was possible to remember. And if there's ever a time of conscious life that could best be described as womb-like, or at least pre-birth, it's those teenage years when you are just on the verge of adulthood, but your survival is still very much tethered to the lives of your parents. It is a time of tenuous independence, when irrational impulses feel like the only rational responses to a world that makes no sense.

That disorienting feeling, that feeling of swimming into the unknown, is one that permeates Sea Monsters, the dreamy new novel by Chloe Aridjis. In it, 17-year-old Luisa runs away from her home in Mexico City, heading to Zipolite, a beach in Oaxaca. She goes with a boy, but she goes for herself. It's a testament to that time of life when everything is on the cusp, and just coming into being.

Below, I talk with Aridjis about the inspiration for Sea Monsters, the strange pleasures of being a teenager, and if she ever has the impulse to run away from it all.

What the inspiration was for this book, and what made Luisa's story a story you wanted to tell?

It's based on a real episode from my own adolescence. When I was 16, a year younger than she was in the book, I did run away with a boy I liked—at the time. My father came searching for me. It was a quite shocking experience for my parents; I surprised myself with my actions. I always knew I was going to return to it, and write about it, but the question was when. For some reason, it took nearly 30 years to revisit that moment, to feel ready to return to it and to write about it.

What do you think made now the right time to do it?

When I finished my last novel, I thought, Okay, Chloe, now is the moment to return to Mexico. You've written two novels set in Europe. My imagination began drifting in that direction suddenly; it almost became historical fiction. It really felt like going back in time and relying mostly on memory. The big challenge was taking that one episode that really happened in my life and weaving stories around it, inventing new characters, and taking it as far as I wanted into the realm of fiction. In the beginning, I wasn't sure I wanted to make it too autobiographical. I kept that episode and many of the details, and then my father's search—he kept a notebook at the time, so many of the details of the father's search at the end of the book are actually based on my father's own chronicle. The story of the dwarves [came from] an article we found in the paper one day. There was never any follow-up, so it was always a big mystery what had happened to them. I always knew I'd somehow incorporate that into my book even though it had nothing to do with my running away.

One thing that I really loved is the combination of specificity and dreaminess that pervades Luisa's perspective. I feel like that's really emblematic of what it's like to be a teenager and both be so compelled toward the dreamy side of things, always internally philosophizing, but then to also obsess over certain objects or people or ideas. What do you think it is about that age in a young woman's life that feels so magical and wavy, but then also so rooted in a sensory reality where everything is so vivid?

Adolescence is this antechamber where you're trying out different selves, and it's a time when you identify with all different kinds of people. As you get older, you may still have high levels of passion, empathy, and interest in others, but you identify with fewer people and have a stronger sense of self. At that age [as a teenager], you see someone and you project, whether it's romantic or friendly; it's very easy to have a friendship or fantasies about a certain person. That dreaminess or state of daydream is quite mobile and can move from one person or idea to the next without too much trouble. I suppose male adolescence is full of daydream, too.

When I was growing up in Mexico, there was perhaps less of a sense of urgency, you stay within the daydream but don't necessarily act on it. In earlier drafts, it was the boy who said, "Let's run off to the beach." And in real life, it was the boy. I would never in my life suggest or think of doing such a thing. But in the book, I wanted this young girl to have a stronger sense of agency and her own restlessness to act upon it and not remain in that state of daydream, which most adolescents do.

There's such an interesting myth around the idea of the teenage runaway, and it's nice to have an alternative version of it where there's still some sort of fairytale qualities, but has a different kind of pulse to it.

I also loved that the parents weren't really present; it really reminded me of what I was like when I was 16, 17, and how even though my parents were constantly worrying about me, I didn't have that parallel worry about them. But then, at the end, we're brought into the father's mind and his fears.

I thought it was very important for Luisa to leave her inner world, and say, "While you've been running around, this is actually what's been happening," and suddenly see the awareness of everything that her actions triggered in the city, and within the two most important people in her life. Of course, as a teenager, I had an extremely close relationship with my parents and always have had, it was never a question of running away from anything at home that was upsetting or difficult, but very much just about teen infatuation, and not thinking at all of the consequences. I thought that it was very important to bring the father in at some point, not even as a reality check, but just this parallel narrative at the end of the book. While she's been floating from one state to the next, there was something very concrete in the search.

Have you ever had any sort of resurgent impulse to run away again?

No, absolutely not. A year later, I went to university in the States and have never lived full time in Mexico again. I'm geographically farther from my parents, but still closer than ever to them. I still surprise myself that I did that at the time.

The ability to write fiction is its own ability to escape, maybe. It's kind of an amazing thing to be able to look back on something from 30 years ago and recognize yourself and your actions, but not fully understand your decision-making process. Which is probably for the best, right? If we were still in our 30s and 40s making the same kinds of decisions we were making as teenagers… that would indicate something not too positive.

The only thing that hasn't changed at all was my musical taste.

While you were writing, did you listen to New Wave music? Did you keep up the '80s soundtrack present in the book?

When I'm actually writing, I listen to a lot of classical music. Other moments in the day, I would definitely listen to many of those songs just to contribute to a certain atmosphere. Sometimes, some songs would give me an idea for a character or bring me back to those years.

As you were writing, did anything surprise you? Did your writing take you anywhere you hadn't anticipated?

Definitely. The merman, that character is completely invented and just appeared one day while I was writing, wandering into the beach bar in my head. The fantasy moves on to something else, and acquires a new form. He was definitely something invented and not included in an earlier version, and one day popped into my head. Same thing with Luisa's best friend; he was a completely invented character and halfway through writing the book, just appeared. The merman took me by surprise because I intended just writing the story about running off to the beach and the fantasy and that's that, not moving on to someone else.

Did finishing the novel offer any resolution to that time in your life? Not that you necessarily needed it, but did it feel like you got a fuller understanding of yourself from back then that you didn't have before?

Possibly, but I'm still asking myself that. I'm still not certain.

If you'd like to make a difference in the protection of our planet's oceans, Aridjis suggests donating to Sea Shepherd Conservation Society, an international nonprofit organization that helps marine wildlife, and all things oceanic.