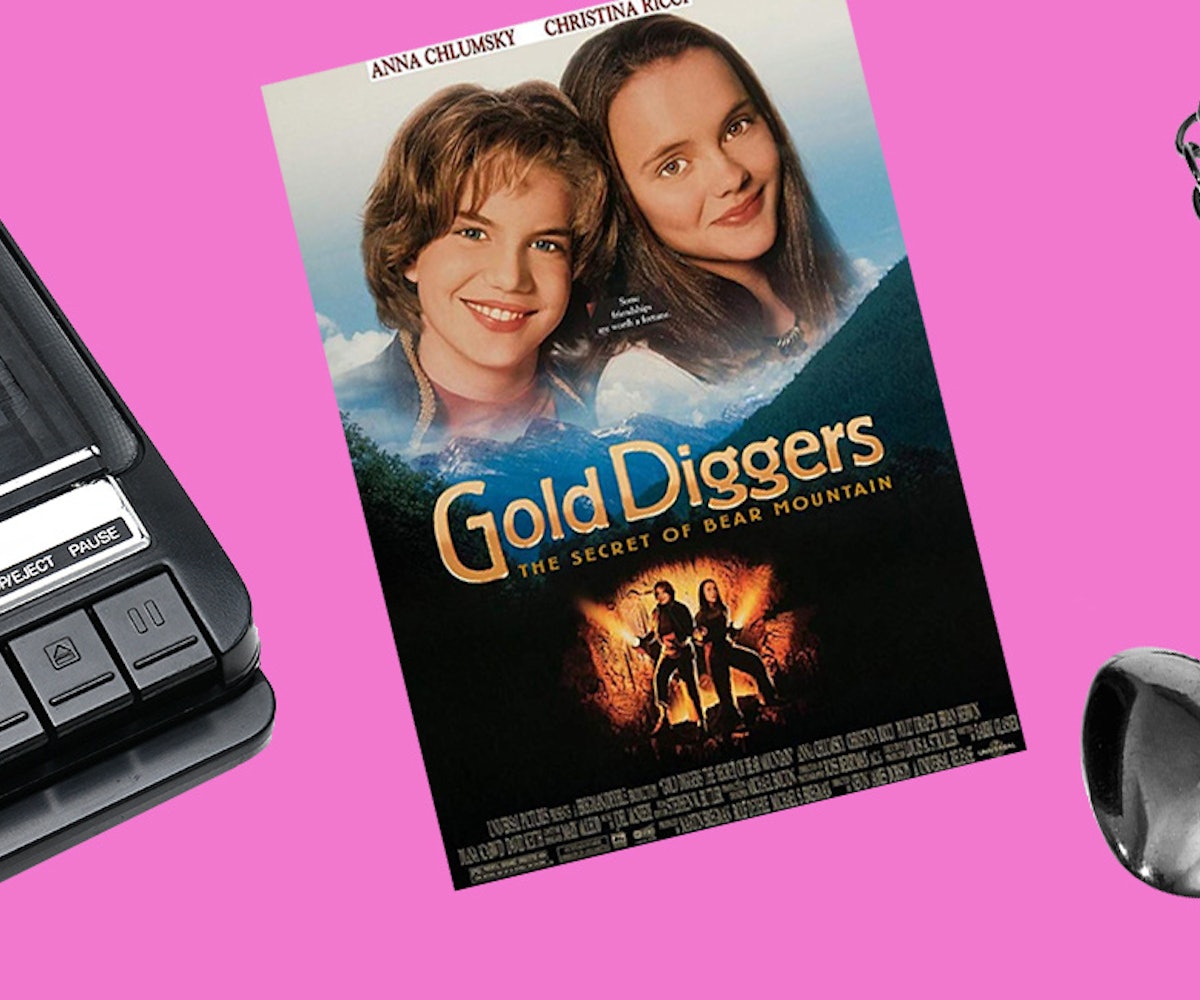 Before I knew that "coup de foudre" signified a lightning bolt, a meteorological jolt from above, I learned, thanks to my French vocabulary workbook, its metaphorical connotation: the electric experience of falling in love at first sight. I was captivated by this concept, a jolt of the heart and senses instead of a sky-dwelling phenomenon. And yet, the first coup de foudre I ever witnessed was, according to dominant narratives, a misinterpretation. Ten years old, I was settled in the butter-saturated dark of a movie theater, eagerly watching Christina Ricci—I was always, whenever possible, eagerly watching Christina Ricci—in her oft-overlooked turn in 1995's Gold Diggers: The Secret of Bear Mountain.

I was watching her, or rather her character, fall in love. The setup is this: It's the summer of 1980, and, in the wake of her father's death, adolescent Beth Easton (Ricci) and her mother have moved from Los Angeles to a quaint and socially claustrophobic town in northern Washington. A reluctant transplant, Beth rides her bicycle into town, surveying the provincial sights with an uncharitable eye. Her sullen ruminations are interrupted by the brief commotion of a scuffle between two teenagers, both short-haired and dressed in vaguely boyish attire: one participant is identified as male, and it seems more than safe to assume the other is, as well.

Then, Jody Saleno (Anna Chlumsky) turns around, and the camera decelerates into slow-motion, as if to accommodate both our surprise—it was 1995, remember, so this binaristic gender reveal was meant to startle us—and Beth's admiration. And yet, adult Beth's accompanying voiceover elides any suggestion that she was concerned over Jody's identity or presentation; on the contrary, it is a quick but wistful comment affirming a long, loving intimacy between two women—an intimacy that, for Beth, seemingly began with this headrush of instant attraction. "That was my first glimpse of Jody," Beth fondly recalls, "the finest woman I know."

I was a naive 10-year-old, but I was also lavishly romantic. Before my thoughts could self-correct—could recalibrate to accommodate the truth I was supposed to rely upon and trust—the word "love" glowed inside my head, red and warm. I felt it, and I saw it, as if it hung before my eyes, sultry and fluorescent. I had read about love at first sight: In D'Aulaires Book of Greek Myths, the gods and goddesses always pursued beautiful creatures they had only just spied from the clouds. I knew, too, that Romeo and Juliet's catastrophe unfurled because their love—sparked at a glance during a party—was forbidden by their families' blood feud. Literature, the template for my callow life, had instructed in me this much, and the flutter at the bottom of my stomach whispered the rest: Beth had just fallen in love with Jody.

I wish that this realization had been clarifying, that it had laced together the stray tendrils of my own fledgling romantic experience. Perhaps it would have called to mind the girl in my Girl Scout troop whose proximity, since approximately second grade, had condemned me to dizzy solicitude; my eyes scanned for her in the hallways, during gym class, and at lunch there was a barbed, but ever-diligent, patrol. When I didn't see her, my stomach collapsed in a mélange of relief and dejection, an alchemy familiar to me now, but one that bewildered me at the time. I dreamed of our becoming inseparable, when in truth we were, at most, friendly acquaintances, and the prospect of meeting her gaze made me panic, as if I were being asked to stare directly into the sun. My diary entries from elementary school run wild with anxious speculation. Why can't I face her? I wondered, as I grappled for an answer that always eluded the nib of my pen. Once, as if to further exemplify my predicament, I sketched two little girls: one smiling and waving at the other—me—whose back was turned to her, a rudimentary but clearly pained expression on her crudely drawn face. "Hi!" read the thought bubble ballooning from the other girl's mouth. In response, I said nothing.

Of course, I had a crush on that girl. Probably it was the first crush ever to take root in my anxious, fledgling heart. But the continental expanse of decades and de-familiarity—my family moved away, and because we were not really friends, she and I never spoke again—scuffed out her memory until a couple of years ago, when I was rereading my diaries for (rather torturous) book research. I had only recently come out as bisexual. Re-encountering my scribbles, desperate and searching, and the doodle—that sad doodle of a terrified, besotted little girl—my eyes widened. "Oh my gosh!" I cried. "I liked her." What could possibly have been more evident?

But in the '90s, I only understood queerness in the abstract, and as something that "happened" to other people, mysterious types ensconced far away, people I would surely never know. Classmates tossed around the word "gay" with that enthusiastic impishness born from naiveté, and eventually, I learned its relationship to the clinical term "homosexuality." To say I vaguely understood it would be generous: It was something inchoate, detached from identity. At the time, I never considered—I lacked the conceptual scaffolding to consider—that gayness could be at all relevant to me (I did not learn the term "bisexuality" until sometime later in junior high). And because I have always been a neurotic sort, inclined to fixations, I must have assumed that my preoccupation with this girl was merely another indication of my fundamental oddness, an index of my inability to commingle with people my own age, with the charm and ease I envied in others. For that same reason, Beth's first sight of Jody— rough-and-tumble, fierce, fluid—presented in Gold Diggers as one of the definitive experiences of her emotional life, registered as a conundrum to be summarily and tidily explained. The scene had only looked like a coup de foudre: I was romanticizing, as I was wont to do, and exaggerating something meant to be important, but not seismic.

Recently, I rewatched the film to indulge my piqued curiosity. After unearthing these memories of a childhood crush that had both plagued and baffled me, I was curious to know what else I might have pushed aside, what flickers of longing I had misperceived and tucked away into an archive of unexamined relics of sexual awakening. Mostly, I remembered Christina Ricci, and how seeing her films was one of my most pressing imperatives. I recalled her doll's face, her insouciant grin, and the glossy brunette hair that made my fingers prickle with a yen to brush and smooth and braid. I recollected the scene in Now and Then when her character, dismayed by puberty's insistence, taped her breasts down to prevent them from growing, and I felt envy and pleasure fuse in a queasy synthesis: Teenage Christina had never met a T-shirt or oversized flannel she couldn't cozen to her advantage. I remembered thinking something similar about a friend in ninth grade, and wondering why, when she came out to me as bisexual—by then I had gleaned some sense of the word—I experienced no shock, but rather, elation—until, of course, she emphasized that I need not worry about her coming onto me. I couldn't explain to either to her or to myself why, on the contrary, I was worried that she wouldn't.

I ordered a copy of Gold Diggers, grimacing at the title, which, like so many '90s artifacts, has aged as well as yogurt. And if I force myself through the heady cloud of nostalgia, I can admit that the film isn't especially memorable. I'm weary of narratives where sudden wealth acts as a deus ex machina, even when its recipients—especially, in this case, Jody—are deserving and female. At its base, Gold Diggers is a pleasant but unremarkable film in which two white girls, one deeply impoverished, search for legendary gold, surmounting some not inconsiderable obstacles—a vicious subplot of domestic abuse is woven into the narrative—and cultivating a keen friendship along the way. It was the friendship that enchanted me; it seemed more remarkable, and more rare, than buried treasure.

Female friendships are romances all their own, of this I am certain. But authorial intention be damned, Beth and Jody offered me the possibility of imagining something else. After Beth first spies Jody mid-tussle, the pair have roughly two more meet-cutes, one in which Jody, ensconced in the branches of a tree, teasingly throws berries at Beth, and their subsequent banter waltzes into a joint recitation of Winnie the Pooh. Dependant upon the most conventional narrative tropes, Jody is, from the start, marked as the tomboy from the wrong side of the tracks, and Beth is admonished against spending time with someone who is "trash." But Beth scoffs at this small-town snobbery, remarking to her mother that there is "something about [Jody]"—an ineffable allure that cinches their intimacy after the briefest acquaintance. And when, after a brush with mortal peril, Beth's mother demands that she no longer see Jody, her daughter declares in love-steeped outrage, "Nothing you say will ever change the way I feel about her."

Perhaps this line of dialogue is yet another example of dear old '90s earnestness, spoken with the confidence that only comes from youth's unscarred vision. Perhaps. But Beth Easton and Jody Salerno—they could have been my something else. They could have my first encounter with queer romance, if that had been what I wanted from them. If only I had known that was precisely what I was yearning for, and that I had already begun searching, my object obscure, but no less beloved.

NEXT UP
Life
Paul Mescal Is A Single Dad In Emotional Aftersun Trailer
Life
A Studio Ghibli-Inspired Cookbook Is Coming To A Kitchen Near You
Life
Julia Fox Calls Ye “The Most Lit Rebound Ever”
Life
Joseph Osmundson on Virology, Monkeypox, Queer Intimacy