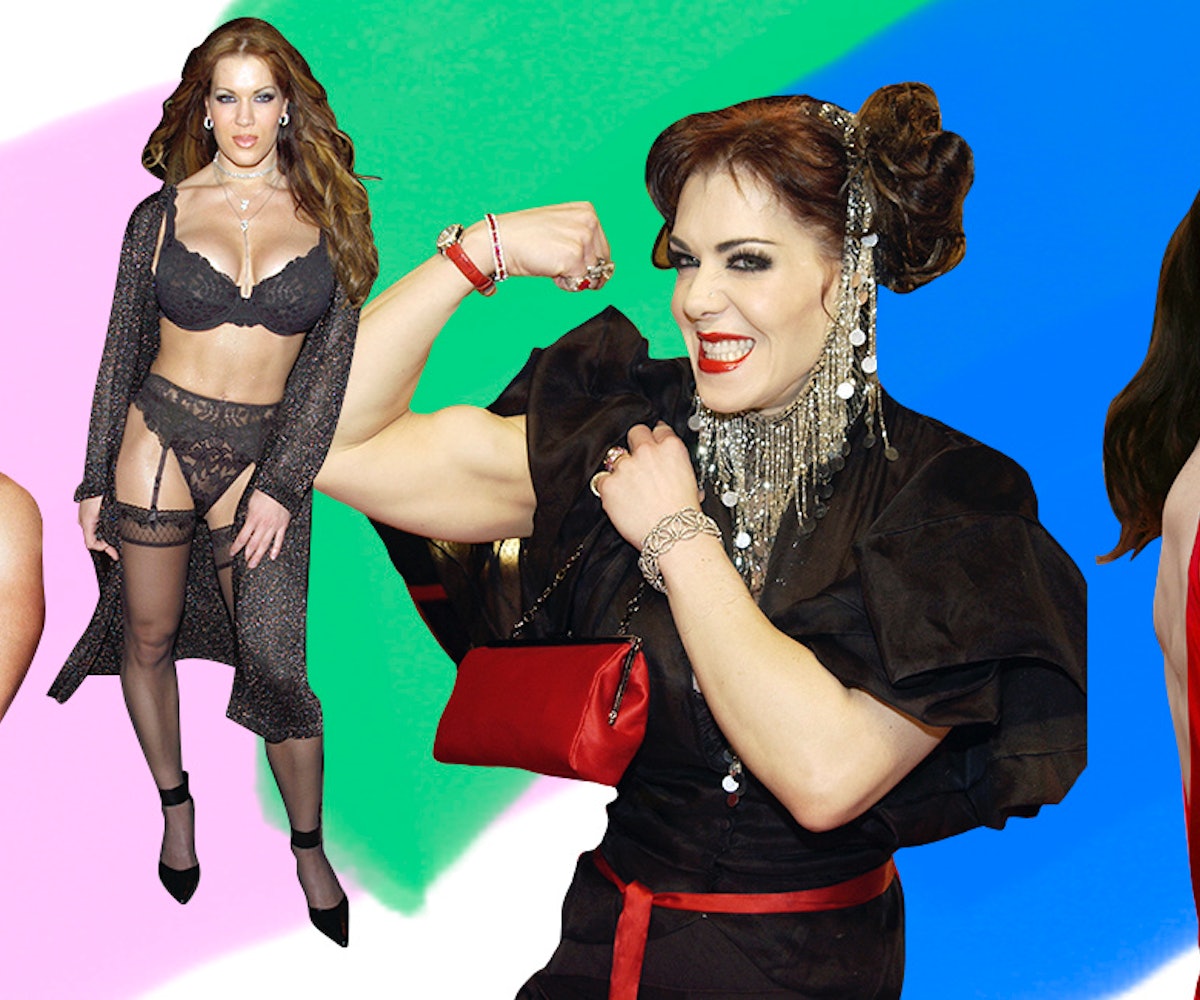 Although waves of fashionable nostalgia have millennials remembering the late-'90s and early-'00s as a time of optimistic girl power, the culture at the turn of the century was undeniably misogynistic. Women like Lorena Bobbitt, Monica Lewinsky, and Tonya Harding were excoriated in public, victimized by both the men in their lives, and by the media who made them the subjects of never-ending cruel jokes. In the pro-wrestling world during that time, the suffering and objectification of women was readily on display for chauvinist entertainment; with few exceptions (including notable feuds between groundbreaking stars like Lita and Trish Stratus), women's matches were often written more as softcore porn than as legitimate competitions.

Exempt from this kind of treatment was Chyna who, after years of training with the legendary Killer Kowalski and working on the independent scene, was introduced to the WWF audience at the In Your House: Final Four pay-per-view, held in February of 1997. Joanie Laurer—later known as the 9th Wonder of the World—made her debut during a match with Hunter Hearst Helmsley aka Triple H—then portrayed as a cocky Connecticut aristocrat—with whom she later became romantically involved in real life. The fight was against Goldust (a queer-coded, glammed-up babyface), who at the time was accompanied to the ring by Marlena (gender-subverting, cigar-smoking femme fatale). Chyna suddenly appeared at the conclusion of the match, grabbing Marlena's head in her massive arms and ragdolling the petit coquette until the two were separated by security.

"When Chyna debuted, everyone was stunned," says Val Capone, a roller derby competitor and pro-wrestling ring announcer based out of Chicago. "Because at the time, women were not really portrayed as athletes—they were more like arm candy. So seeing her as Hunter's bodyguard totally blew my mind. Instantly, I was like, 'She's my hero!' She was brutal, she was badass, and yet she was beautiful."

More confused than fans at the moment were the announcers. The first sentence ever spoken about Chyna on a WWF mic was: "Is that a woman?"

Although she was always portrayed as both strong and impossibly gorgeous, Chyna was frequently turned into a sort of transphobic punch line both in and out of "kayfabe." In her New York Times bestselling book, If They Only Knew, Laurer describes the immense pain she felt when misgendered, and the physical and verbal abuse she suffered at the hands of fans and colleagues who couldn't tolerate her gender presentation.

[But] there was plenty to bawl about. The slights, getting passed on for a SmackDown!, or working and having people spitting on you, the exotic beer shampoos, people asking to see your dick, little kids calling you a cunt, the aches, the pains, the foam-rubber motel pillows, the big, dark shadow of my estranged family (of course!), the loneliness. Especially in the beginning, when I first joined the WWF—lotta swallowed tears. I wanted to be a perceived as someone who could handle all of it, not as the high-maintenance, hormonal, sniffly problem. I guess if I had any real designs on competing with the guys, I had to act like one. Damnedest thing, isn't it?

But it was Chyna's gargantuan size and Amazonian strength that allowed the higher-ups at the WWF to put her in a unique position in the company, eventually garnering her adoration: Regularly scheduled in matches against both women and men, Chyna was the first female enforcer character, the first woman to ever enter the Royal Rumble, the first woman to enter King of the Ring tournament, the first female number one contender for the heavyweight title, an undefeated women's champion, and the first (and only!) woman to win the Intercontinental title, in a so-called good housekeeping match that overtly played on feminist themes, with Chyna trouncing the misogynistic Jeff Jarrett using household objects regularly associated with female servitude as weapons. When Chyna posed for Playboy in 2000, within the WWF's story line, she even battled a stable of censor-happy conservatives over her right to be sexy in public.

In what now reads as a devastating passage from her book, Chyna explains how she finally came to accept her own body after a lifetime of what we now might describe as dysphoria:

Muscle definition leading up to places undeniably feminine, like a lit-up runway for planes to land on. I have Big Jessica Rabbit Beauty covering a heart that won't stop longing for the little things. Smooth and hard, tall as a flagpole, and I am flying my freak flag high … So there it is in the full-length mirror when I wake, there it is in the eyes of admirers and detractors, there it is splashed across the pages of Talk magazine in chronological cells—a history of conspicuousness. Half feminine, half power bomb. Me and my body, Joanie and Chyna. A load, isn't it? It's that car with all the fins, the skyscraper among the high-rises, the wineglass when everyone else is drinking out of mugs—and I wouldn't have it any other way.

"She was always an outsider," says Rob Potylo, a close friend of Chyna's who has been at the helm of a social media campaign to have her officially recognized in the WWE Hall of Fame. "She was the Amy Winehouse of the wrestling industry. She was Janis Joplin. She got there by sheer will and talent. She came out of nowhere being a 'freak' and clawed her way to the top. But because she was an outsider, she didn't have too many friends, especially other women. With the way she was in the ring, showing everyone how she can dominate women—I don't blame them. But Chyna's story is bigger than all of that."

Off-camera, Laurer struggled deeply with mental illness and addiction, some of which could be spotted in plain sight in her frequent reality TV appearances on shows like The Surreal Life and Celebrity Rehab, where both her endearing sweetness and frightening bouts of mania are depicted quite plainly. Her issues had caused significant problems in her wrestling career, leading to feuds with CEO Vince McMahon and Triple H, who—in a melodramatic turn of events reflected in WWE story lines—had fallen in love with Vince's daughter. (Much later in life, Chyna would go on to make a series of accusations about the two, accusing them of sexual misconduct, physical abuse, andpedophilia.) She was let go from WWF—by fax, she claimed—in 2001.

"She was completely scorned," said Potylo. "What happened was so Shakespearean, nobody could control it. Hunter legitimately fell in love with Stephanie [McMahon]—and Joanie, she made mistakes. Because she didn't have a lot of friends and family around her. So when she fell from grace with wrestling, you had all these scavengers and sycophants coming out of the woodwork and giving her the worst advice on earth. And it's just a shame, because when her head is on, she's great. She wanted to do everything in her power to get back into the good graces of the WWF. She realized how much her legacy meant… She cared so much about it. She wanted to atone."

Following her departure from the WWF amidst several scandals, Chyna embarked on a career in the adult entertainment industry, further establishing her as both a desirable sex symbol and tabloid fodder for magazines who saw her as a cheap, salacious headline. Her anatomy, again, became the subject of transphobic derision.

"Unfortunately for Chyna, when you're the trailblazer, sometimes you're the one that gets burnt," says Capone. "If you don't look like a perfect Barbie-doll vision of what male-dominated society thinks women should be, then you get treated like garbage. They see you as less than a woman if you can bench press more than the guys."

Chyna briefly re-entered the wrestling world in Japan in 2002 for a series of stunning, yet difficult-to-find matches with male Japanese wrestling legends like Hiroshi Tanahashi and Kensuke Sasaki—and again in 2011 for TNA, a smaller federation with a devoted audience.

Then, amidst a long and public battle with addiction, on April 20 of 2016, Chyna was found dead in her apartment in California. She was 46 years old. Although her passing garnered some sympathetic coverage, it was quickly overshadowed in the news on the same day by the passing away of another gender-subverting icon: Prince.

The WWF (now the WWE) has struggled with its historically poor treatment of women throughout its contemporary efforts to elevate female talent, which (for the most part) have been largely successful. Deeply revisionist and often outright inaccurate in its retelling of its own mythos, Chyna's legacy within the WWE had been underplayed or ignored completely. Many speculated that with the WWE's turn toward PG entertainment in the mid-2000s, executives feared Chyna's participation in the porn industry would sully their family-friendly aesthetic, while others believed that it was Chyna's disparaging comments about the company's figureheads that forced them to relegate her to a relatively minor position in their pantheon. Similarly, after an attempt at reviving intergender wrestling in WWE this year was canceled (supposedly after sponsor pushback), WWE may be reluctant to highlight the star best known for that style of fight, knowing bouts between men and women are often criticized as encouraging domestic violence. Nonetheless, this year Chyna has finally been posthumously inducted into the WWE Hall of Fame—not as a solo performer, but as a member of D-Generation X, the faction with which she debuted.

Meanwhile, in 2019, women will have finally achieved the greatest honor in wrestling: Becky Lynch, Charlotte Flair, and Ronda Rousey main-evented Wrestlemania, impressing the wrestling world and perhaps forever changing the destiny of all female wrestlers in the future. On the indies, intergender matches are a regular feature of many events and are treated mostly with both dignity and adoration.

"She inspired a lot of female talent," says pro-wrestler Stan Stylez, best known for his Intergender Bonanza series of events, in which all matches on every card are totally gender-inclusive. "You're seeing a lot more intergender matches nowadays, especially on the West Coast … but it was Chyna—hell yeah—that's who started it. And the fans and wrestlers are all so excited about it."

If changing social attitudes around the treatment of women have allowed us to re-evaluate the cultural climate in which someone like Chyna existed, then it seems high time for us to reconsider Joanie Laurer not as a bizarre anomaly or helpless victim—but as a groundbreaking hero.

"I hope above and beyond everything else that when we finally evolve from this awful desire for evil heels that take the dirty deal and move toward dorks and anime lovers and whimsical dreamers getting titles, we're going to look back at people like Chyna who were martyrs and we're going to realize how much she paved the way," concludes Potylo.