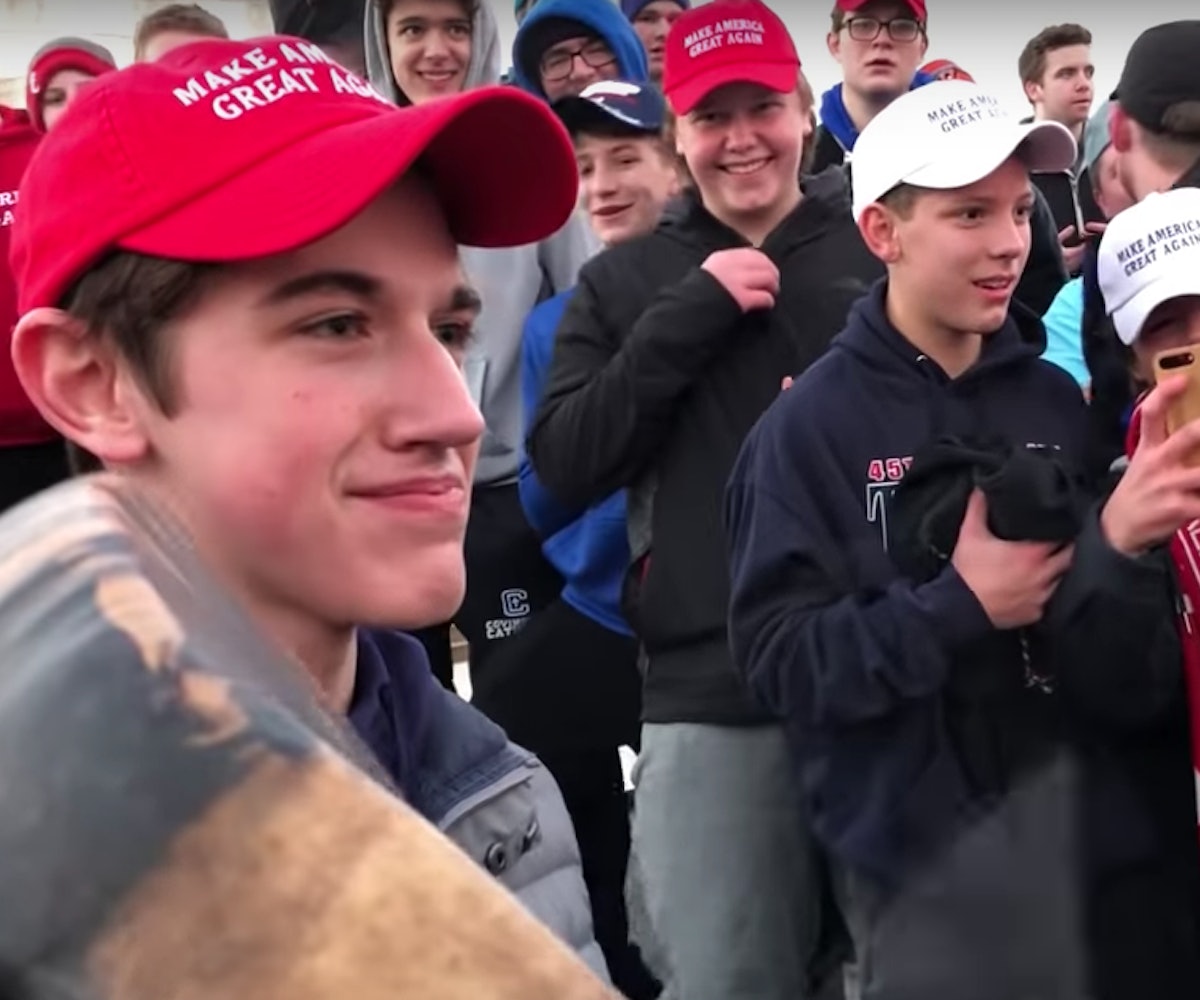 On January 18, the day before the third Women's March and two days before the second anniversary of Donald Trump's inauguration as the 45th President of the United States of America, Washington, D.C., played host to two other public rallies: the Indigenous Peoples' March and the anti-abortion-focused March for Life. That same day, a video was posted online which showed participants from both events, engaging in what appeared to be a confrontation; on one side was a mob of white teenage boys, many wearing Make America Great Again hats and other paraphernalia; on the other, a Native American drummer, much older than the scores of boys whom he faced, and stoic in the face of their frenzy.

The video soon went viral, with most people immediately expressing outrage at the way these teenagers taunted and mocked the drummer, who was soon identified as an Omaha elder and Vietnam veteran named Nathan Phillips. The teens were similarly identified as anti-abortion protestors, there for the March for Life, and students at Covington Catholic, an elite all-boys school in northern Kentucky, just outside Cincinnati, Ohio. One still from the video was particularly haunting: an image of a smirking white boy surrounded by his peers, standing face-to-face with a man who was his elder, but to whom he clearly accorded no respect. It visually encapsulated everything nauseating about white supremacy: its utter lack of respect for other people's humanity, its reliance on mob violence and intimidation tactics, its security in its own power, its knowledge that it still controls the system because it is the system.

But just as quickly as the video surfaced and the boys within it were condemned, so too did a defense emerge, with the smirking student at the center of the video—now identified as Nick Sandmann—even issuing a statement about his involvement in the day's events, denying that he was mocking Phillips, claiming that he was trying to defuse the situation. Immediately, people on Twitter started issuing apologies, saying that they hadn't realized the "full story" of what had happened; media organizations like Bustle and The Atlantic and HuffPost now made clear that they thought there were "different angles" to the recorded events. And once again it was proven that, in America, all too many people think it's a graver crime to call someone a racist than it is actually to be a racist.

Because let's make no mistake: By virtue of wearing MAGA hats, those teens are demonstrating that they embrace racist ideology. Furthermore, the video clearly shows them miming tomahawk chops and mimicking Phillips's chanting in a way that could only be construed as mockery. And then too, it seems that Covington Catholic High School has a documented history of racism, including, per the New York Daily News, condoning students wearing blackface at basketball games and shouting at and "verbally abusing" black players on opposing teams.

This video shows clearly what it looks like when white supremacy is wielded by a mob: It is ugly and brutish. But also, it is impossible not to consider what it was that those students were doing in Washington in the first place. They were not there to protest the presence of the indigenous people. Rather, they were there to protest women's right to have autonomy over their own bodies. Much in the same way that mass shooters almost always have a history of domestic violence, white supremacy and misogyny go hand in hand too.

The values that Trump and his followers esteem are ones that espouse a white-led patriarchy, and emphasize the ultimate supremacy of the white man. There is a reason, then, that dozens of white boys from a Kentucky high school would pay a reported $130 to travel to the nation's capital: They wanted to assert their dominance over women, and make clear who it is that will have the final say over women's bodies—them.

And so the notable thing about this viral video isn't just that these smirking boys, wearing hats in a shade best described as "white supremacy red," can clearly be seen engaging in provocative, racist behavior, it is that they make clear that their hate is intersectional—it encompasses everyone who doesn't exist within their ideological parameters. Although the furor over this video has started to die down, aided by people falling all over themselves to apologize for believing what they saw with their own two eyes, it is important to stay furious over it, to stay aware. This isn't just about a single incident of abhorrent behavior by a horde of smirking MAGA trolls, this is about the culture in which they are raised and which they thrive. It is a culture that denies the humanity of anyone who isn't a white male, a culture that seeks to take away the rights of women, a culture that mocks the traditions of indigenous people, a culture that is so used to getting away with murder that its current leader has bragged about being able to do just that.

Growing up in a culture like that, it's no wonder that a teenager feels entitled to wear a smirk on his face while his friends jeer in the background. It's pathetic, really, and could be empathy-inducing, the fact that these young men are being raised so poorly. But it's not, because the stakes are too high, the number of people who are hurt by the system that these boys seek to perpetuate is too overwhelming. But they will learn someday, that their way, the way they've been taught, is doomed. They're dinosaurs. And when they find out, that's when the smirks will be wiped right off their faces. And not a moment too soon.