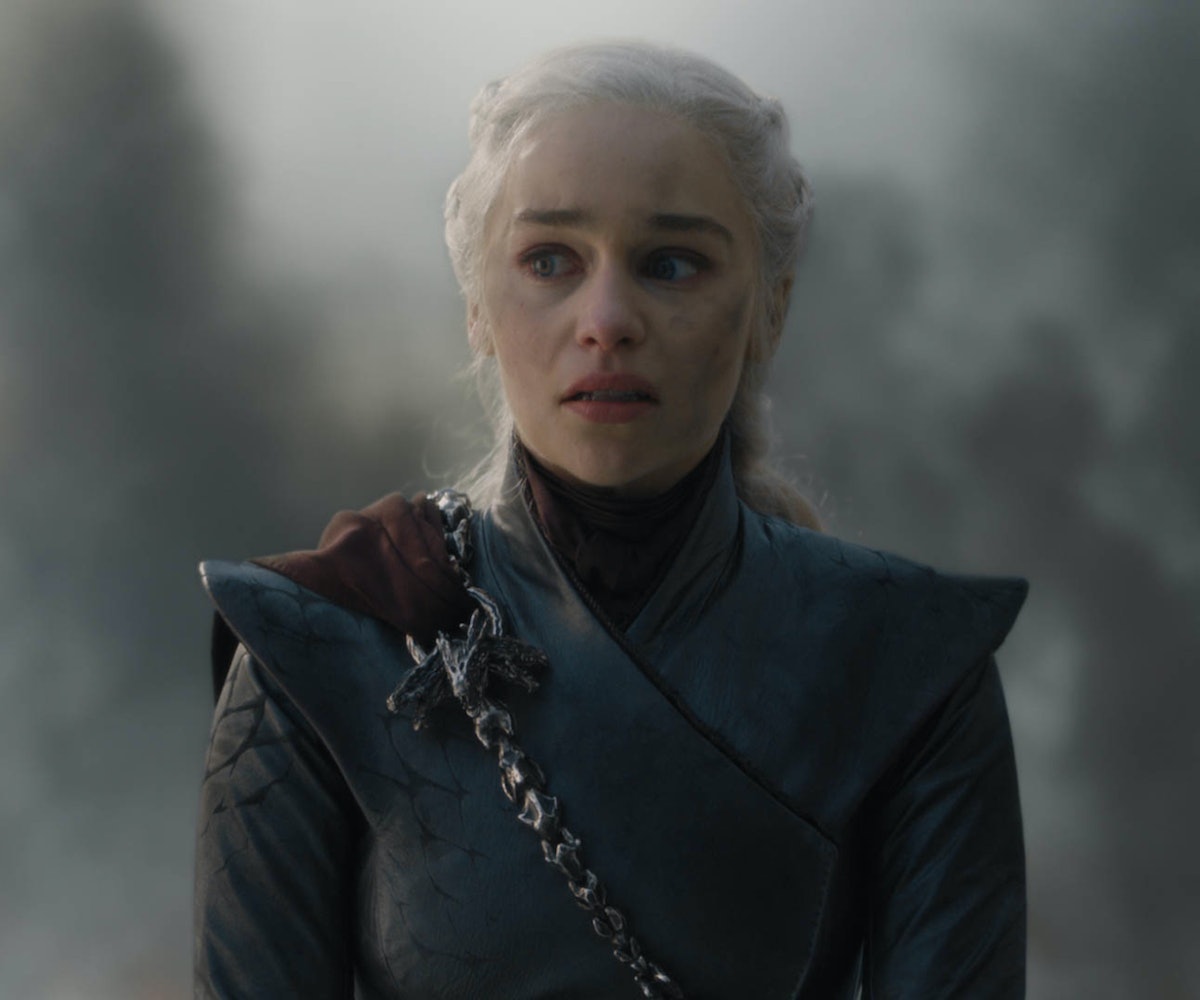 Spoilers for Game of Thrones season eight, episode five, "The Bells," ahead.

In 2018, "Khaleesi," the honorary title given to Game of Thrones character Daenerys Targaryen when she became queen of a Dothraki horde, became the 549th most popular name for baby girls in America. In an article in the New York Times, parents explained they chose the name because, to them, the word "Khaleesi," and the character of Daenerys, signified "strength." As one mother put it about the Dragon Queen: "She's definitely a woman who knows her power, knows what she wants."

And, as could be seen by last night's penultimate episode of Game of Thrones, what Daenerys Targaryen had always wanted—to vanquish her oppressors through the use of "fire and blood"—became exactly what Daenerys Targaryen got; the Khaleesi is now the Queen—albeit the type of monarch she'd once said she didn't intend to be: Queen of the Ashes.

After Daenerys swooped into King's Landing on the back of Drogon, her last remaining dragon, destroying not only the Iron Fleet and the mercenary Golden Company, but also every single last one of the dragon-killing scorpions that lined the city's crenellated walls, the sound of pealing bells within the city signaled to Daenerys that she had won. The people had surrendered; the throne was hers. But that was not enough for the Mother of Dragons, who had lost so much in her march toward reclaiming what she is sure is hers alone. So rather than simply turning Drogon toward the Red Keep, where Cersei Lannister stood, awaiting her fiery doom, Daenerys proceeded to fire-bomb the city's civilians, wreaking hellish havoc on men, women, and children, and demonstrating that Khaleesi had meant what she'd said at the beginning of the episode: Since she did not have the people's love, she would rule them through fear, through fire and blood.

For those viewers who counted Daenerys Targaryen amongst their Game of Thrones heroes, for those parents who saw nothing uncomplicated about naming their child after a colonizer with a raging savior complex who was fully committed to the idea of the divine right of absolute monarchy, the spectacle (and, it was a spectacle; the fiery rampage was easily one of the most harrowing, compelling battle episodes in television history) was hard to bear. Here was a powerful woman, whose long-stated goal was the liberation of the oppressed and the cessation of tyranny, and rather than merely killing only the unambiguously evil characters, like Cersei and Qyburn and Euron Greyjoy, she was instead enacting indiscriminate vengeance and behaving, to paraphrase the already incredibly reductive words of showrunners David Benioff and D.B. Weiss in the episode's post-script, like one of the bad guys instead of one of the good guys.

But was that so different from how Daenerys had previously acted? While there is little doubt that Daenerys was given an archetypal hero's arc—not least because she was placed in opposition against Cersei Lannister, an indisputably, almost comically evil villain—there is just as little doubt that every single season of this show demonstrated that when Daenerys was given the choice between obtaining more power or offering mercy, she chose power. That lack of mercy was something understandably, if complicatedly celebrated when the victims were prominent members of slave-holding societies, but she also showed a lack of mercy whenever anyone disobeyed her commands and undermined her authority—as could be seen when she executed Mossador, a leader of Meereen's freedmen, who had killed a member of the rebellious insurgent group, the Sons of the Harpy. Rather than show mercy for Mossador, Daenerys had him publicly executed to set an example for everyone else: Her word was law. Her power was absolute.

There are many other examples of Daenerys refusing to show mercy, even when it wouldn't have directly threatened her: like when she killed both Randyll and Dickon Tarly, or when she burned alive the witch, Mirri Maz Duur, in Season 1. Mirri Maz Duur was the person responsible for the deaths of both Khal Drogo and Daenerys' unborn child, but she was also a voice of reason, reminding Daenerys that the Khaleesi's desire to rule Westeros would come at great cost—there is no path to power that does not trample over innocent bystanders.

For every instance of Daenerys' cruelty, though, there are counter-examples of her generosity: her insistence upon ending slavery in Essos; her demand that Yara Greyjoy tell the Ironborn that they would no longer be pillaging and plundering, as had been their tradition; her decision to fight the Army of the Dead rather than immediately attack King's Landing. These are the actions which led people to take to Twitter last night, furious at the way the Dragon Queen had been treated, demanding a better resolution for her character's arc—one that allowed them to maintain their vision of Daenerys as an uncomplicated hero, an example of someone who has great power, but uses it only for positive ends.

And yet, Daenerys' actions in King's Landing are the obvious, the inevitable, outcome of the kind of political upheaval which she had long promised, and which viewers had seemed to demand. There is no revolution, there is no power-grab, without the decimation of the ruling class—and those who supported it. Anyone who has any grasp of history (which, admittedly, does not seem to be many people!), could see in the burning of King's Landing echoes of the Allied bombing of Dresden in the waning days of World War II, when the Nazis had already effectively lost. It was also hard not to see parallels between the WWII Allied fire-bombing of Tokyo and the dropping of two atomic bombs on Japanese cities that were not military centers. And, of course, the Allies were the "good" guys in that war; this episode of Game of Thrones is a necessary reminder that there are rarely good or bad guys in war, there are just winners and losers. And Daenerys—for now, anyway—is a winner, not because she's merciful and not because she's just and not because she's loved and not even because she's feared, but because she has power. As Cersei herself once said, "Power is power."

This isn't to say that there shouldn't be disappointment in what happened with Daenerys in the series. But that disappointment doesn't mean that Daenerys isn't a hero—because she is, in fact, the hero. Or rather, Daenerys is more than just the hero; she is our hero—she is us, in all of our inherent contradictions. She is us, in all our desires to be loved and respected and get what we want. She is us as we slowly, slowly come to terms with the fact that we can't have everything, that we deserve nothing—no matter our last name. And she is us as we fight against that, refuse to accept that we are not exceptional because of our birthright, but rather because of our actions, our willingness to do the right thing and do it again and do it again, even if it means not having the life we think we're meant to have. But then, Daenerys is not all of us, because what "The Bells" proved is that she refuses to be us; she stays herself, and she maintains her power, and she lets everyone else burn.

Among the many things Daenerys destroys is the false binary of bad and good—which is something we could all stand to do. This binary brought us the bizarre focus on the Targaryen lineage, and the insistence that each time a dragon is born, it's a flip of the coin to see whether they'll be sane or insane. Daenerys, then, was set up to fail, because there is no way she could have been all good—no leader can be. And viewers were set up to see something dark about our own needs, our own desire for a savior, for someone who can swoop down out of the sky and rescue us, for a god. Viewers were set up to question why they were so quick to embrace this Mother of Dragons, this Mother of Destruction, in the first place; embrace her to a degree where they named their children after her and wrote defensive essays about her political goals.

Watching Daenerys destroy a city, reduce its inhabitants to ashes, it was hard not to recoil and ask ourselves: Is this our queen? But the answer is clear: Yes. And that says a lot about us, and the problems we have with power, with justice, with needing a hero, with needing to be saved by someone other than ourselves.