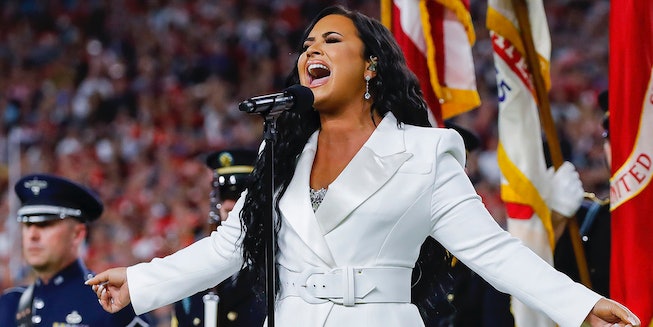 Quarantine is hard enough as it is. But to be single during quarantine, a time when non-monogamous hooking up is severely frowned upon, is hell. (Trust me ... I know.) So thank God for online dating, which gives those of us bored at home the opportunity to connect with other people around us, even if we can't actually meet in person until further notice. Though there are some people who are (rightfully) calling out others for using apps like Tinder, Grindr, and Hinge to plan IRL connections, these apps themselves aren't to blame for how users choose to exploit their features. Unfortunately, things might be a little bit different for Demi Lovato, who apparently can't indulge in the simple pleasures of online dating even if she wanted to. In a new cover story for Harper's Bazaar, the actor-cum-pop star revealed that she had recently been rejected by Raya, the contingent-on-application-approval dating app that caters to celebrities and other high-profile influencers.

Don't get it twisted — Demi Lovato has indeed been on the app before (she is a Grammy nominee, after all) but that was only when she wasn't actively in a relationship. "I just deleted it out of respect to the person I was with, then we broke up and I went to get back on," she says. Sadly, the self-described "single as hell" Confident singer ran into some troubles when she tried reinstating her profile, a temporary barrier she thankfully learned to value. "I was like, 'You know what? It's fine. I don't need to be on this because I think I'm supposed to be alone right now.'"

That doesn't mean she wants to be alone forever, though. In fact, the openly bisexual Lovato also mentioned that she knows a day will eventually come when she's ready to settle down with the right person — and that person could be anyone. "When I imagine my life in the future, I don't say, 'I'm looking for a man who I want to have two or three kids with.' I think it could be so much fun to share children with a woman," she admitted. "I don't know what my future will look like, and I'm open to anything. People always ask me, 'What's your type?' And I'm like, 'Have you seen my history?' There is no type. It is solely off connection. I wish I could say, 'I only date attractive people.' But I don't."

And that may be right, though her track record has been pretty exclusive to "attractive" people so far. After dating Joe Jonas during her Disney Channel days, Lovato has dated models (Austin Smith), fashion designers (Henri Alexander Levy), two different professional fighters (Luke Rockhold and Guilherme Vasconcelos), and perhaps most notably, That '70s Show's Wilmer Valderrama. Speaking on her relationship with Valderrama, which is now officially over after six years of back and forth, Lovato says, "I'm really happy for him and I wish him nothing but the best, but we're not in each other's lives, haven't spoken in a long time. But I think I needed that because I needed to learn to be okay on my own. When you get into a relationship with somebody at that young of an age and then you spend six years with somebody, you don't really get to learn about yourself."