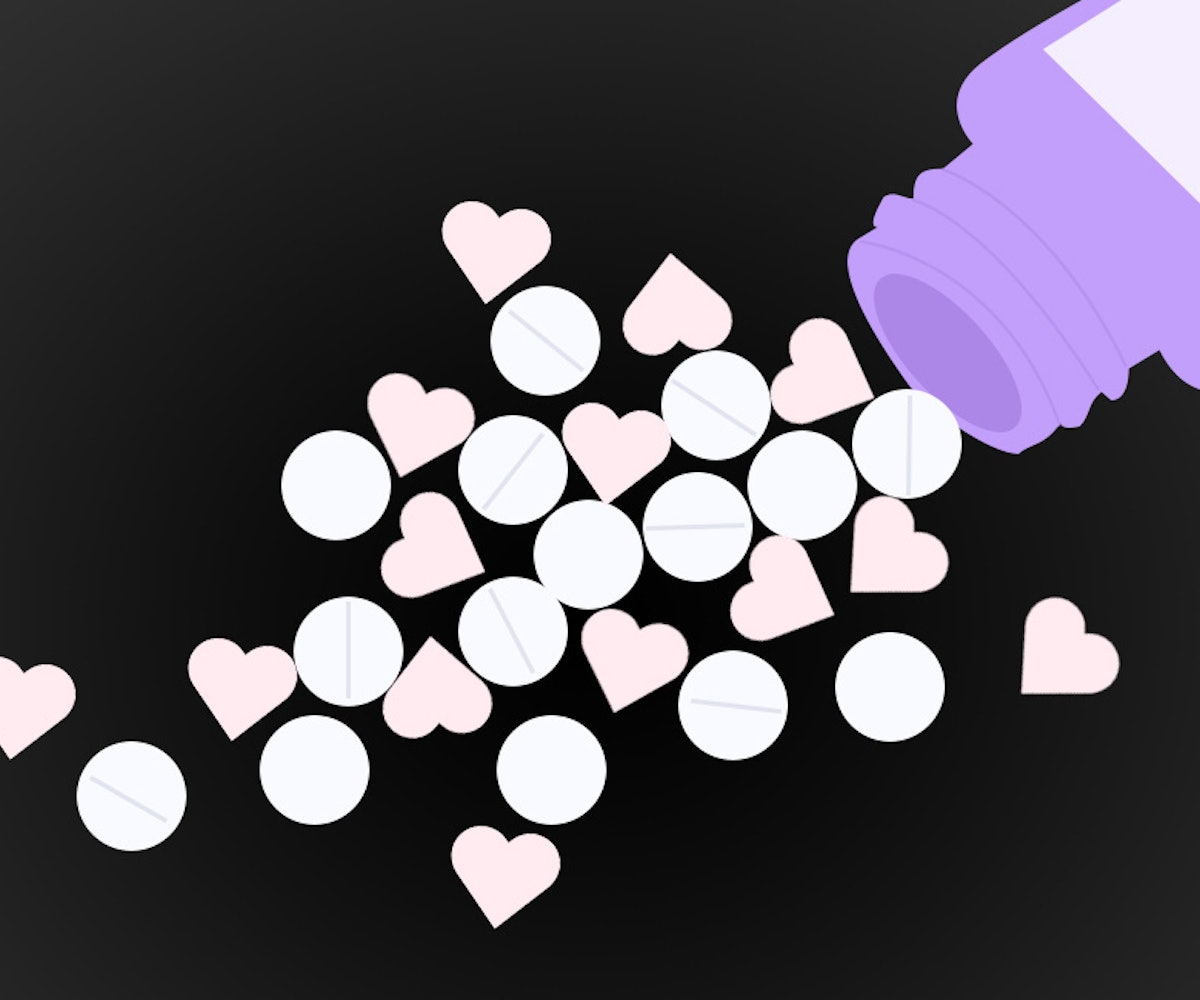 For people who have depression, even the most basic activities can seem daunting—and that includes sex. But because both depression and sexual problems are things that are difficult to talk about, even with intimate partners, the issues surrounding having sex while dealing with depression often wind up being ignored. As mental health advocate and writer JoEllen Notte puts it: "It's the intersection of two taboo topics." And it can lead to even more problems relating to a person's mental and physical well-being.

Notte breaks the negative sex experience that comes with depression into two categories: loss of interest and side effects of medication. Notte says about the former: "I tend to reinterpret [it] as 'everything seems incredibly hard and not worth doing'... Not wanting to be touched, and not wanting to deal with people." While that applies to people who have depression and both are and aren't on medication, the side effects specific to medication are a significant problem, too, and include, Notte says, "erectile dysfunction, vaginal dryness, genital numbness, delayed orgasm, and what's usually referred to as 'lost libido.'"

This loss of libido is symptomatic of a larger problem of depression: anhedonia, which Dr. Sheila Addison, a licensed marital and family therapist, tells me is "a loss of pleasure in ordinary things." One of the things people with depression do to combat anhedonia is try to self-medicate and force pleasure, including through sex. Addison explains, "People with depression sometimes wind up chasing 'peak' experiences, little bursts of endorphins that seem to cut through the depression for a moment, but it's a short-term fix for a long-term problem. And if it turns into having sex that they don't really want, hoping to feel better, it can contribute to feelings of emptiness and self-loathing."

The best thing to do when dealing with depression is to seek out a doctor, but even if you are comfortable seeking out help for depression, it can be difficult to broach the topic of sexual health, without feeling anxious. As Notte points out, "So many people have had bad experiences with doctors not wanting to deal with [sex] or prioritizing it as a topic." My own doctor's flippancy toward the subject was enough to shut me down for months, and it seems like this is all too common, leading to further stigmatization of this sensitive topic. Notte says, "All of the data that says these [sexual] side effects don't happen is skewed, because people aren't reporting them."

Nevertheless, each person I talked to stressed that even though it's difficult, if you are having issues with sex and experience depression, talk to a doctor first. Addison says that online forums can be the source of "a lot of unsolicited advice, pseudoscientific 'cures,' and supposed remedies that will lighten your wallet more than your mood." And if you find the first doctor to be unsympathetic to your problems, then look for another one.

But how to find the right doctor? Notte recommends looking for keywords like "sex-positive" and "trauma-informed," as it often means they'll be more willing to discuss sexual issues or at least be able to point you in the right direction to someone who could. Addison herself is a member of LGBTQ Psychotherapy organization GAYLESTA and listed amongst kink-friendly professionals. These keywords tend to suggest the doctor has a more nuanced, whole-body approach to understanding and treating mental illness, but, of course, it may take a bit of searching to find someone whose methods you are comfortable with.

Once you find a doctor with whom you're comfortable talking, you can also utilize them when you want to talk with your partner about any problems you might be having with regards to sex. "People often don't know that you can bring anyone with you to your doctor visit if you want," Addison points out. "Sometimes it's easier to have the doctor talk directly to your partner because it's not so personal." Addison advises that the partner who isn't experiencing depression seek care as well, saying, "Get support for yourself, from a therapist or from a group for partners of people with mental illness. Take good care of yourself, physically and emotionally."

The main theme here, as with any taboo topics, is that talking about them is key, and the only way to remove the stigma. It's particularly apt in this situation, though, as conversation, and communication in general, are also at the core of maintaining healthy romantic and sexual relationships no matter what your mental state.

But even though we know we should communicate openly, it can be difficult to get started. That's why Allison Moon, sex educator and author of Girl Sex 101, recommends beginning conversations with "I statements" when breaching the topic of sexual issues. "It's easy for people to catastrophize when partners bring up sexual issues, and they may be tempted to take responsibility for the issues of their partners," Moon says. "It's a good idea to use extra care when explaining one's own experience, and be clear that the partner isn't at fault or causing anything." When considering the problem as a whole, Notte advises a team mentality for couples. She says, "What happens a lot is it gets treated as an issue of the healthy partner versus the other partner and their depression, and if we can be couples who are working on one team while the depression is on the other team, it's a much healthier dynamic."

Moon also recommends "speaking in concretes" when describing the ways depression affects your life and sexual experience to your partner. "Because mental health is so individuated, saying something like, 'I have depression' doesn't always convey what one intends. Instead, I suggest discussing how something like depression manifests in a way the partner can understand. For instance, rather than saying 'Depression makes me insecure,' you could say, 'Sometimes I need extra verbal validation from you. Can you tell me you find me sexy and wonderful? Can you remind me that I'm a good person?'"

Describing symptoms associated with depression can be difficult, though, and Notte often advises individuals to use what she refers to as "accessible" resources ("things that are not scary, that are not medical journals") to work on coming to a mutual understanding of what you are going through. "Find things that are the language you and your partner speak," she says; she sends her own partner comic strips and had them play Depression Quest, a role-playing game in which you navigate tasks as a person with depression.

"We treat mental health very different than physical health," Notte points out, adding, "If I were dating somebody and I had diabetes and wanted them to know I'd have to inject myself with insulin at some point, I wouldn't have to be embarrassed to tell them that." As with any disease, depression shouldn't be treated as a liability in dating, and people who would treat it as such are not worth your time. Addison tells me, "Anybody who's going to make you feel bad or weird about how your body works, does not deserve access to it. Disability rights folks have taught me, don't apologize for how your body works or feel like you need to make someone else feel okay with you. If they can't handle you, they can't get with you."

But that doesn't mean it will always be easy—for either of you. So being present with your feelings and communicating them to your partner is vital. Moon says, "When you notice something coming up for you, whether it's an emotion, a sensation, or a memory, practice giving it attention and letting it give you information." Perhaps there is a "need attached to the emotion that you can turn into a request," like needing more lube, or a moment to process your feelings before hooking up, etc. "If you notice that you're going to cry, for instance, you can mention that so it doesn't scare your partner," Moon suggests. "Saying something like, 'I'm having a great time, but I'm noticing some sadness come up. So if I start to cry, that's okay, you're not doing anything wrong. I'll let you know if I want to stop, but I don't want to right now.'"

Likewise, Addison recommends acknowledging the experience in the moment in a way that reassures your sexual partner that you don't blame them for what's happening. You can do this, she suggests, by saying something like: "This is just a thing my body does sometimes, and I"m not worried about it, so you shouldn't worry about it either. Thanks for understanding. And I'm really enjoying [kissing you] so let's do more of that."

While the physical manifestations of depression in sexual relationships cannot be solved by medication, Notte recommends "workarounds" to address your specific sexual issue. Notte recommends using lubricants and not shying away from toys if experiencing anorgasmia, genital numbness, or erectile dysfunction. Exploring these types of options are especially great for people whose depression-related sexual problems manifest as specifically physical.

While all of this information is important for people with depression, it's also essential for the partners who don't have depression to understand how to respond in these situations. Addison tells me the best way is the simplest—nothing more than a "thanks for letting me know." She explains, "Viewing someone as broken, or suffering, or in need of special treatment, is actually a poor way to approach sexual intimacy. If someone trusts you enough to let you know what's going on with them, appreciate the gift that has been given to you, and treat it accordingly, with respect. [If your partner says,] 'I don't come through intercourse, and I might or might not finish myself off afterward,' it is not an invitation for you to try to complete the Labors of Hercules to prove what an awesome lover you are. It's information for you to let you know how this person's body works, so be grateful that they trusted you enough to share something private with you, and act accordingly."

And, she points out, "There's nothing wrong with enjoying your climax when you're with someone who's said, 'I probably won't get off, but it's still fun for me.'" Above all, Addison states, "Treat them like the expert on their own body, and you'll be on the right track."

Of course, finding people who will do that, especially at the beginning of a relationship or when dating around, can be difficult, but Addison advises to "decide what you're looking for and what you're willing to do or not do in order to get it… then screen your dates accordingly." Finding someone who is comfortable with and respectful of your depression and sexual issues is a trait that can be filtered right in with your usual set of dating criteria. Addison says, "If you say, 'Hey, I have medication that means I probably won't come, and I'm looking for a partner who won't be hung up about it—are you cool with that?' and they try to inform you about how they're going to be the one who makes you scream down the rafters, that's a good reason to swipe left." After all, she explains, "You can't fuck somebody out of depression with your Magic Penis or Magic Vagina."

If you or a loved one are seeking out further information about experiencing the sexual side effects of depression, seek out a psychologist or psychotherapist near you, and remember, as Addison says, "The only people who deserve to get close to you are people who can understand your needs and treat you with appropriate respect and care."