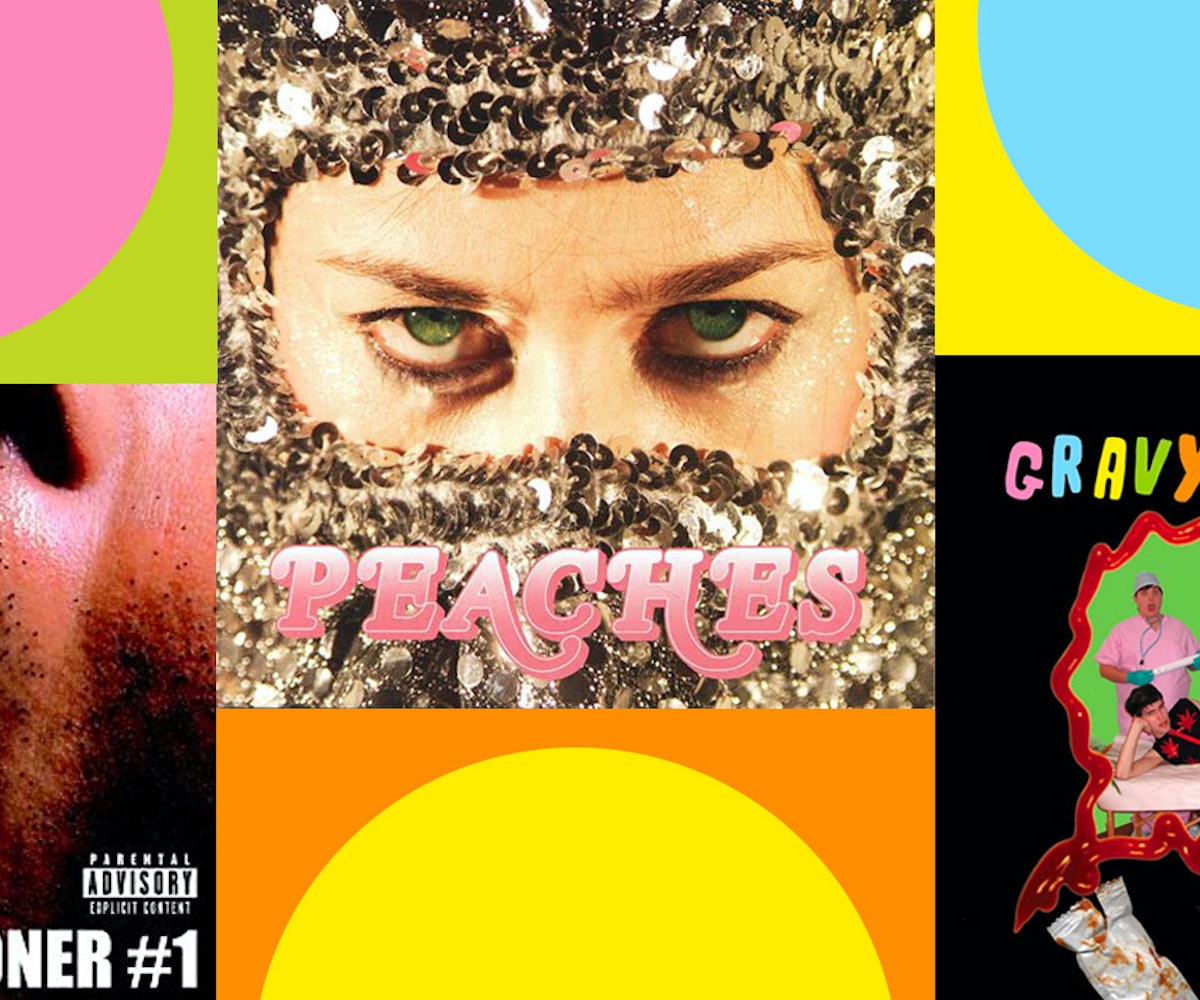 In the early 2000s, the media landscape was dominated by bratty socialites and reality TV vixens competing for their 15 minutes of fame. The music industry was just becoming enamored with the earnestness of indie rock. And anyone even remotely left of center was unhappily protesting George W. Bush, as conservatives clutched at their last vestiges of right-wing power before Obama emerged on the scene. But in the sleazy corners of New York City and Berlin's raunchy gay bars, a small sub-culture of discontented queers was simmering: Simultaneously critiquing and celebrating the excesses of the culture before the inevitable economic collapse, electroclash was born.

The moniker "electroclash" was coined by Germany-based DJ Larry Tee, who had collected a cabal of radical performers making underground electronica that explored disparate motifs of deviant sex, extravagent wealth, emotional deadness, intentional superficiality, and dystopian paranoia. The visual aesthetic of the scene was inspired by 80's no-wave and avant-garde sci-fi films like Liquid Sky, while the sonic palette collected influences from minimalist techno, acid house, bubblegum pop, chiptune, and lo-fi post-punk. The movement had the energy of a fashion show at the end of the world—never mind the fact that no bands really identified themselves as electroclash.

Partially an answer to the simpering sentimentality of New Sincerity, electroclash—whose key players were almost exclusively queers and women—was inherently filtered through a thick lens of deadpan, decadent irony. They saw both the homophobia and incredible income disparity of the early '00s as akin to that of the Reagan era. Singers nihilistically bragged about carrying handbags filled with money and doing cocaine in the VIP area—even though many were DIY artists just tasting their first lick of fame.

But electroclash died just as quickly as it blossomed and by the time the 2010s rolled around—even bringing it up seemed absolutely tacky. Perhaps it was all just media hype from the start—a flash in the pan with lots of style but no real substance. Perhaps songs about endless ostentatiousness just seemed patently gauche once the recession began. Or perhaps the world wasn't quite ready for such displays of unabashed queerness and unapologetic cynicism. For a moment, Lady Gaga seemed like some kind of electroclash messiah with her songs about being eternally pursued by cameras, but maybe she made the whole thing sort of redundant. Besides her, reviewers never really took to electroclash anyway: Much of the genre was almost universally critically panned.

"It's certainly not great music," Pitchfork critic Julianne Escobedo Shepherd wrote of the 2003 Gravy Train!!!! album Hello Doctor, which she gave a score of 2.9 out of 10. "Its terribleness is trumped by its incredible disregard for human decency."

Other reviewers of electroclash barely hid their homophobia: "There are plenty of reasons to hate Fischerspooner," wrote a Slant Magazine critic about the band's 2005 album, Odyssey, which he gave 2 out of 5 stars. "Is it all just synthesizer and nail polish? The answer is, unequivocally, yes,"

"The genre is really rigid. The parameters of electroclash don't leave a lot of room for growth," says Gay Panic, one of the few Brooklyn DJs currently playing electroclash out in clubs and bars. "I was a teenager at the time, but it seemed like people suddenly wanted things that were more lush and serious, like Fleet Foxes or Animal Collective. That wasn't really the electroclash way. The people originally involved in electroclash got more money, they kept going and got better. They no longer sounded amateurish enough to be called electroclash."

Now, in 2019, our endless fascination with the faux pas of the early 00's are fodder for eager fashionistas: "Retro" works in 20-year cycles—so it's no surprise that whatever was cool and gay two decades ago is what's on-trend now.

So: Are we due for an electroclash revival? On the one hand, the pessimistic intensity of electroclash is exactly the attitude we need to winkingly dismantle the blatant vapidity of influencer culture and the inhumanity of the billionaire class that continues to extend their entrenched power and oppress anyone who doesn't look just like them. With Donald Trump acting with even more blatant disregard for dignity than George Bush ever could have—in the midst of both looming economic and environmental disasters—it's almost like we're walking down the runway during doomsday yet again.

"Because the 2000s are 'a thing' now, electroclash will be a part of it," says Gay Panic. "What I see being the twist is the revivalist electroclash will have to be harder and more abrasive—something like Deli Girls or ZAH. The only thing electroclash ever had to say was 'Look at how silly these rich people are being.' That has a place in the current climate but I think that the stakes are higher. When we're mocking rich people it's with urgency."

On the other hand, perhaps electroclash had set the stage for what we know of culture today and never really died at all. With queerness taking the spotlight in countless cultural products—now often critically celebrated instead of denigrated—it seems like electroclash has accomplished its mission: The hypersexuality of electroclash is now a regular feature of radio-ready hits, shallow EDM has successfully supplanted rock music as a dominant genre, and we've fully embraced the end times.

Meanwhile, samples of old-school electroclash artists like Miss Kittin and The Hacker are already beginning to pop up in ballroom mixes from deconstructed club artists like LSDXOXO, with the motifs of arrogance and opulence inadvertently matching the aesthetic of vogue. Electroclash staples like ADULT., Ladytron, and Fischerspooner have returned from years-long hiatuses to grace us with their latest takes on apocalyptic pop. The old electroclash classics are being discovered anew by Gen Z when nostalgic millennials of a certain age bracket who remember the genre as their first exposure to underground culture are once again spinning the old songs.

Brett Rubin, who throws a recurring party in New York City called Vicious where electroclash music is regularly played, sees the sub-genre as coherent with other alt categories like darkwave and goth.

"Because electroclash has an '80s new wave vibe, it fits in perfectly [at our party]," Rubin says. "It's the things we reminisce about that we want to bring back into the forefront. I see it related to what my youth was—the time period where I was learning what music was."

In terms of a revival, Rubin was less convinced the genre ever even went away to begin with: "I think it's already out there. It stands the test of time—it fell out of fashion but it also never did. It's not like it's dead, there's just a different take on it. It's not gone, you just have to seek it out."

"People come up to me and are very excited [when they hear me playing electroclash]," concurs DJ Gay Panic. "They're excited to hear the music even if they don't recognize the original tracks. For me, one of the greatest electroclash tracks was 'Shoes' by Kelly. And everyone knows that. People just like cool chicks and dudes whispering cool stuff over simple beats they can dance to when they're on cocaine."

Whether or not a full-fledged electroclash revival will manifest to address our contemporary angst remains to be seen, but maybe there is no such thing as learning from the past without repeating it. The current downward spiral of American politics shows that perhaps the only mistake the original '80s no-wave musicians and the electroclash artists they inspired ever really made was assuming things couldn't get worse than they were.